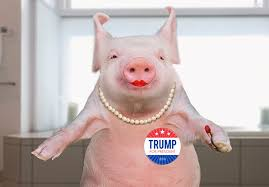 Lipstick on a pig

There will be no stimulus bill until the first quarter of 2021. And even that depends on Biden being elected. Trump decided yesterday to abandon the stimulus talks between Mnuchin and Pelosi. But he was really putting "lipstick on a pig", as a Bloomberg commentator termed it. The neo-fascist Republican block in the House and Senate were always opposed to any "stimulus" other than a tax cut for themselves. For the public, these turds advocate the the old Jesse Helms contempt for the working class -- "the hungry dog hunts harder." The most you will get out of Trump may be an extension of unemployment if he wins -- but who knows what that level of derangement will really produce!

And Trump's actions prove he agrees with "the people are dogs", despite his daily gaslighting ("a specific type of manipulation where the manipulator is trying to get someone else (or a group of people) to question their own reality, memory or perceptions"),   and catfishing ( "a deceptive activity where a person creates a sockpuppet presence or fake identity on a social networking service, usually targeting a specific victim for abuse or fraud").

Democrats, especially progressives, want in the order of 6 Trillion: frontloaded to fight the virus and extend UI and PPP benefits, and rescue state and local governments;  backloaded to focus on infrastructure of the kind outlined in the Thrive agenda, a revised green new deal enhanced with addressing inequality, racism and reformed labor relations It has been endorsed by a rising number of unions. It will take winning the House, Senate and the presidency. Biden will have to go bold and big. I am sure he knows this since literally EVERYONE in the advising business is telling him their version of "go big". But doing it will require both skill and hardball tactics against the ultra right, neo-fascist menace.

It helps to have an outline of the actual future, instead of lots of posturing. But between now and the hoped-for first quarter of 2021 Bob Dylan's Desolation Row, and its tragedies, will rule. Communities will have little protection other than themselves. The dangers are high. Outcomes are being driven by both lunacy in high places, AND, grave externalities from climate change, grave social contradictions and conflicts in the US, and many Western nations,  and rising global instability as many states fail in the face of the combined pandemic/depression. It could take 10 years, and world wars, to get to the hoped-for 2021, if externalities deepen the crisis, and its associated horrors.