Expert Focus: The consequences of economic inequality among Latinx groups in the United States [feedly]

Expert Focus: The consequences of economic inequality among Latinx groups in the United States
https://equitablegrowth.org/expert-focus-the-consequences-of-economic-inequality-among-latinx-groups-in-the-united-states/

Equitable Growth is committed to building a community of scholars working to understand whether and how inequality affects broadly shared growth and stability. To that end, we have created the monthly series, "Expert Focus." This series highlights scholars in the Equitable Growth network and beyond who are at the frontier of social science research. We encourage you to learn more about both the researchers featured below and our broader network of experts.

October 15 marks the end of Latinx Heritage Month. In this installment, we explore the work of five scholars whose research helps us understand the economic aspects of the diverse Latinx experience, including in the workplace, the broader U.S. labor market, and barriers to equitable access to opportunities in the U.S. economy and society. These experiences are often compared to the experiences of Black people in the United States, who tend to face similar barriers to economic equity—comparisons examined by several of the academics whose research we highlight here.

Carlos Fernando Avenancio-León is an assistant professor of finance in the Kelley School of Business and an affiliate of the Center for Research on Race and Ethnicity in Society at Indiana University Bloomington. His work focuses on equitable finance, or the role of finance in economic redistribution, and its effects on disadvantaged communities and inequality. A 2018 Equitable Growth grantee, he and colleague Troup Howard from the University of California, Berkeley published a recent working paper showing that property taxes place an inequitable burden on Latinx and Black homeowners. Their work on systemic racism in taxes highlights the barriers that Latinx and Black homeowners face even after overcoming the U.S. homeownership divide. In other research, featured in this Econimate video, he and his colleague Abhay Aneja, also an Equitable Growth grantee, document how political empowerment through protecting the right to vote had a positive impact on U.S. labor market inequality for Black workers in the South following the passage of the Voting Rights Act of 1965. 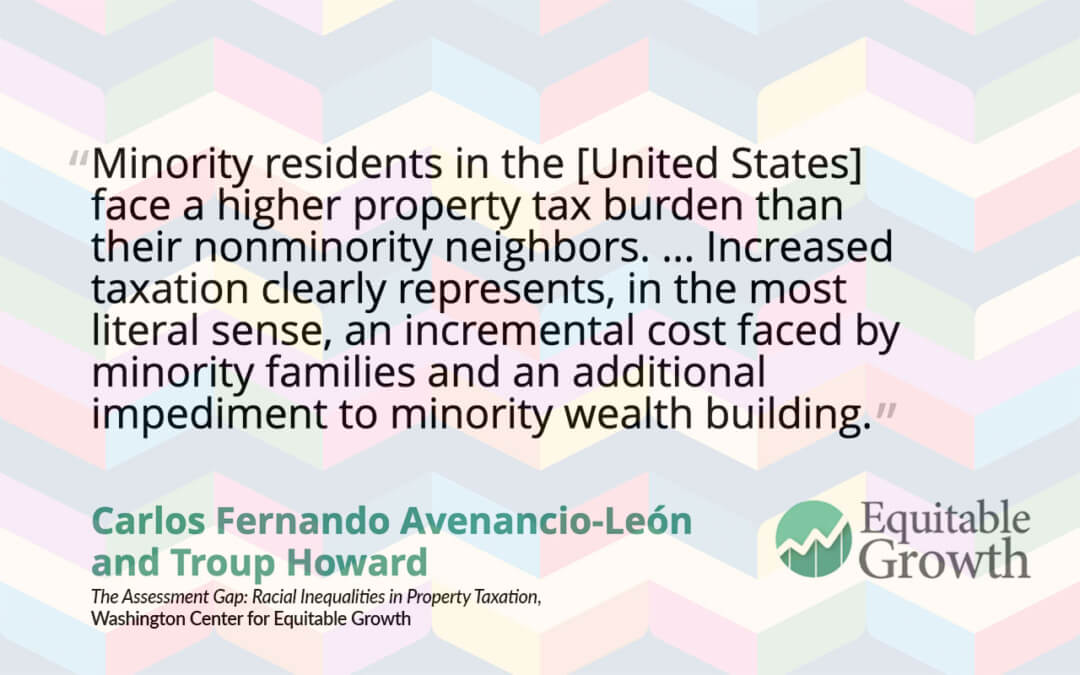 Eduardo Bonilla-Silva, the James B. Duke distinguished professor of sociology at Duke University, is a longstanding influential voice on understanding the personal, collective, and structural dimensions of racism. His work, from his first publication, titled "Rethinking Racism: Toward a Structural Interpretation" in the American Sociological Review in 1997, to his most recent book, Racism Without Racists: Color-Blind Racism and the Persistence of Racial Inequality in the United States, is critically relevant in the context of the coronavirus pandemic and recession, and the social unrest against systemic racism and police brutality. Furthermore, he recently engaged in conversations on how economics can better adopt a racial equity lens by drawing from outside the discipline. At this moment, he is writing on how the actions of White people are central to the maintenance of systemic racism, lecturing across the nation on the subject "What Makes Systemic Racism Systemic?" and finishing the sixth edition of Racism Without Racists. 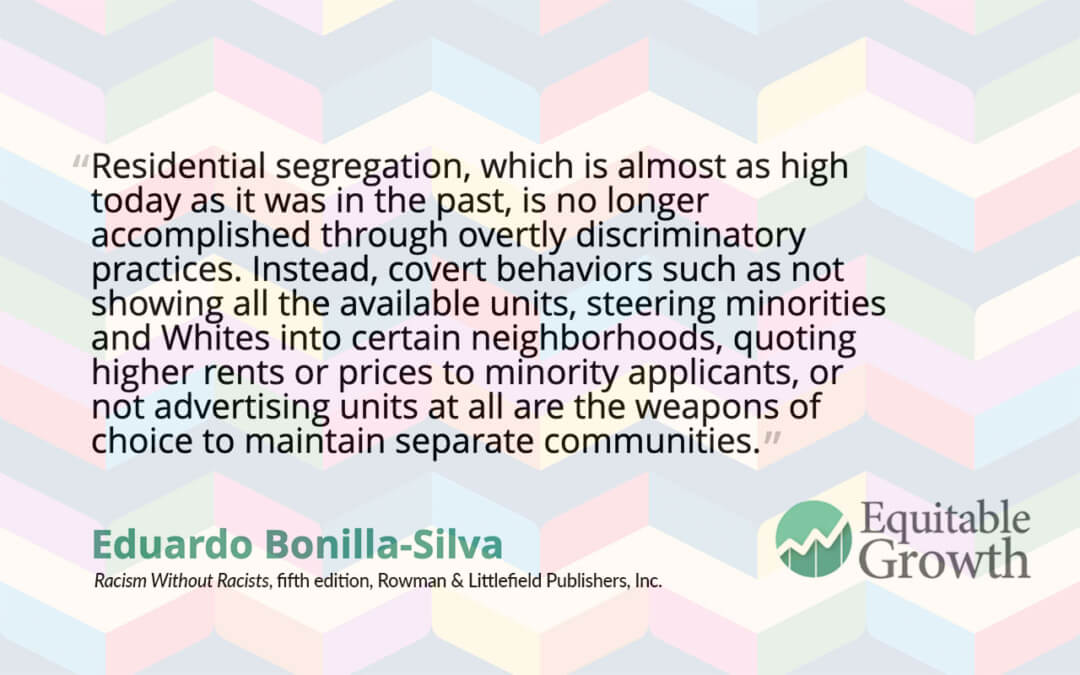 Adriana Kugler is a full professor at the McCourt School of Public Policy at Georgetown University and was the chief economist at the U.S. Department of Labor during the Obama administration. She currently serves on the Science, Technology and Economic Policy committee of the National Academies of Science and Engineering and is the Chair of the Business and Economics Statistics Section of the American Statistical Association. A 2016 Equitable Growth grantee, her current research is on the impact of Unemployment Insurance on the labor market during recessions. During the coronavirus pandemic and subsequent recession, the effect of Unemployment Insurance benefits, partly as a lesson learned from the Great Recession, has remained a vital topic for economic growth and the well-being of families and individuals who may have lost their jobs. Kugler and her co-authors Ammar Farooq and Umberto Muratori, the latter of whom is a former dissertation scholar at Equitable Growth, released a recent working paper showing the benefits of UI extensions to improve the quality of job matches for women, non-White workers, and less-educated workers—an understudied but important subject. Beyond Unemployment Insurance, Kugler's research looks at labor markets and policy evaluation in developed and developing countries, as well as the role of public policies such as payroll taxes, employment protections, occupational licensing, and immigration. 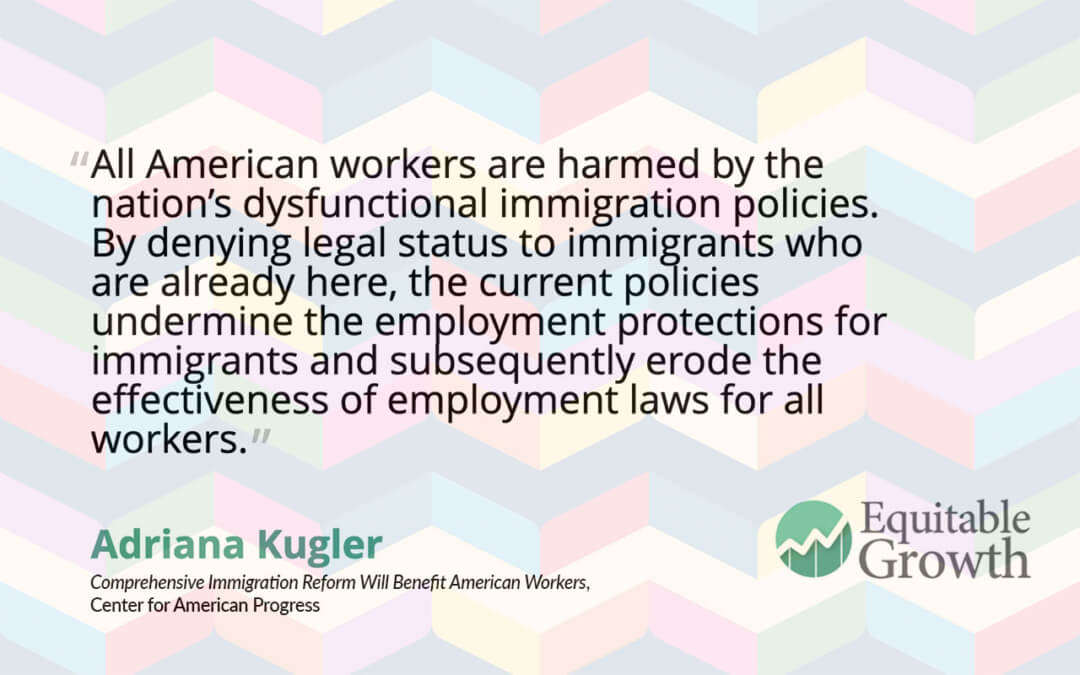 Juliana Londoño-Vélez is an assistant professor of economics at the University of California, Los Angeles, a faculty research fellow at the National Bureau of Economic Research, and a 2018 Equitable Growth grantee. Londoño-Vélez's research focuses on inequality and redistributive tax and transfer policies, including research on developing countries such as Colombia. In her Equitable Growth-funded research, Londoño-Vélez investigates the feasibility of wealth taxation in developing countries. 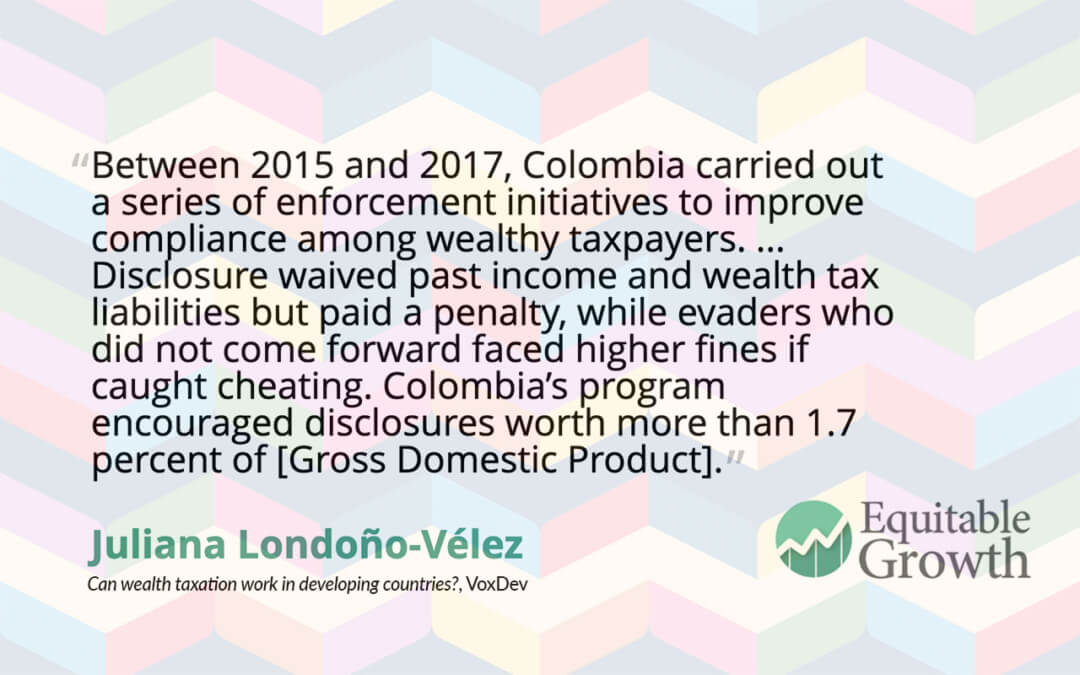 Marie Mora is the provost & executive vice chancellor for academic affairs and professor of economics at the University of Missouri-St. Louis. As a labor economist for 25 years, Mora is a leading voice on education and employment outcomes within/among the Latinx population in the United States. As briefly presented by the Institute for New Economic Thinking, poverty and migration can drive lower outcomes in education and labor opportunities among Latinx groups, including U.S. born individuals. She has also given talks on the lack of access to capital Latinx groups face, which is increasingly evident in today's recession. In August 2020, Mora obtained the national Presidential Award from the White House Office of Science & Technology Policy and administered by the National Science Foundation for her excellence in mentoring. She continues to play a major role in supporting graduate students and faculty from diverse backgrounds—as evidenced by her leadership of the American Economic Association Mentoring program, as well as long-standing commitment to the Diversity Initiative for Tenure in Economics Program and the NSF ADVANCE Program. 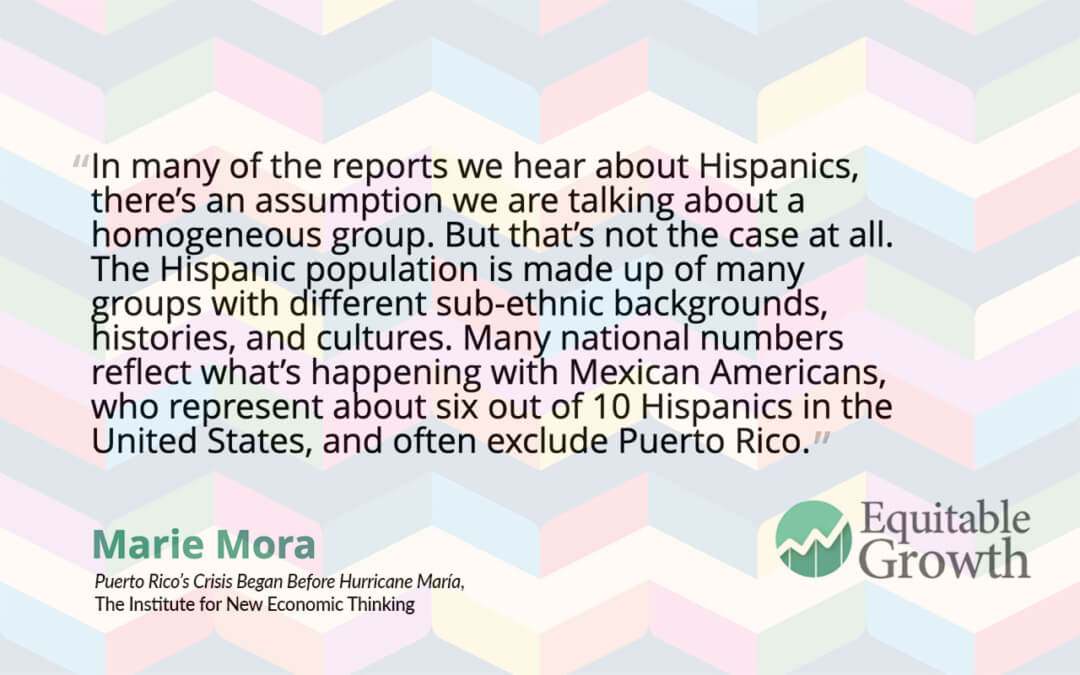 Equitable Growth is building a network of experts across disciplines and at various stages in their career who can exchange ideas and ensure that research on inequality and broadly shared growth is relevant, accessible, and informative to both the policymaking process and future research agendas. Explore the ways you can connect with our network or take advantage of the support we offer here.

-- via my feedly newsfeed
Posted by The Red Caboose at 5:28 AM