China is cementing its status as the world's dominant trading nation, confounding warnings that a once in a century pandemic combined with simmering tensions with the U.S. would derail that status.

Surging global demand for everything from hazmat suits to work-from-home technology has allowed China, which contained the virus months ago, to capture record market share of global exports by quickly reopening its factories while the rest of the world grappled with lockdowns. It's a striking reversal from the first two months of the year when China's exports contracted by 17.1%.

It's also an outcome that underscores the nation's enduring role in manufacturing even amid simmering tensions with the U.S. that have fueled talk of shifting supply chains. For all the tariffs levied by the Trump administration, monthly sales to the U.S. remain robust.

"China's export performance during this crisis is indeed a proof of its solid status as the world's factory," said Yao Wei, China economist at Societe Generale SA. "It is reliable, as the quick and effective containment of the outbreak in China allowed its manufacturing sector to resume operations way ahead of others."

The bumper performance was reflected in government data for September which showed exports rose for the fourth straight month while imports surged. Li Kuiwen, a spokesperson for the General Administration of Customs, told reporters that China's overall share of world trade hit a record in the seven months to July, citing demand that included health-care equipment and technology.

"Looking ahead, we expect exports to continue to pick up on a year-on-year basis in the months ahead. But we think headwinds may strengthen, due to renewed outbreaks of Covid-19 in Europe and potential risks to trade related to the deterioration in U.S.-China relations. We expect imports to continue to register year-on-year growth, though the pace may slow."

The question is whether this is as good as it gets given the resurgent virus in Europe and elsewhere that threatens another cycle of stop-start economic activity that will complicate the global recovery. China has also lost some of its early advantage as production recovered in rival trading partners as lockdowns were eased.

There are other complications too. The better economic performance has bolstered the yuan, which hit an 18-month high last week before the government took measures to cool it. China's current account is now firmly back in surplus after a brief flirtation with deficit, a long-standing imbalance often criticized for its global ramifications.

For now, the picture is upbeat. Exports grew 9.9% in dollar terms in September from a year earlier, while imports rose 13.2%, the customs administration said Tuesday. That left a trade surplus of $37 billion for the month. Economists had forecast that exports would increase by 10% while imports would edge up 0.4%.

"Renewed virus outbreaks in trading partners will be a challenge, but shipments of products benefiting from virus-related demand should continue to hold up," said Louis Kuijs, an economist at Oxford Economics.

The China figures gel with an improving global outlook, for now. The World Trade Organization expects global merchandise trade to fall by 9.2% this year from 2019, compared with the 12.9% drop projected in April. All 10 gauges on the Bloomberg Trade Tracker fit in their "normal" ranges, starting in early September. 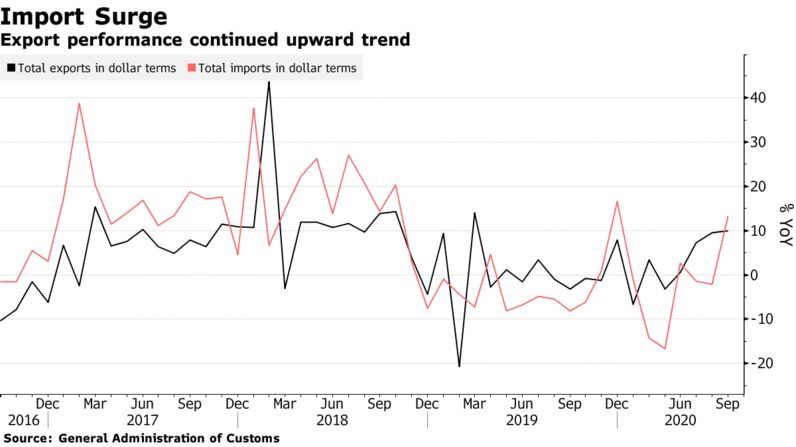 The pick-up in China's imports also suggests a steady domestic recovery is gaining traction, a view that was further bolstered by data released Tuesday showing demand for cars continues to go from strength to strength with deliveries of sedans, SUVs, minivans and multipurpose vehicles jumping 7.4% in September from a year earlier.

Geopolitical tensions were probably one reason for the imports bump as technology firms stockpiled key components ahead of the imposition of sanctions on telecommunications firm Huawei Technologies Co. Purchases from Taiwan jumped 35.8%, while imports from Japan and South Korea rose 13.4% and 17.2% respectively.

That vulnerability is spurring China's government to push for self reliance in critical areas of the economy. In a sweep through China's southern manufacturing powerhouse of Guangdong, President Xi Jinping urged a greater focus on quality to overcome increased global uncertainty and doubled down on a message of "self-reliance".

"Currently, we are experiencing changes unseen in a century, and we need to set ourselves on a path to higher quality self-reliance," Xi told workers at a Shenzhen factory that makes advanced ceramics for most major Chinese mobile phone makers.

Xi is slated to outline his latest policies Wednesday in a speech in Shenzhen to mark to 40th anniversary of the city's establishment as a special economic zone.

— With assistance by Enda Curran, Lin Zhu, and Miao Han

-- via my feedly newsfeed
Posted by The Red Caboose at 5:13 AM