Black, Hispanic, and young workers have been left behind by policymakers, but will they vote? [feedly]

Black, Hispanic, and young workers have been left behind by policymakers, but will they vote?
https://www.epi.org/blog/black-hispanic-and-young-workers-have-been-left-behind-by-policymakers-but-will-they-vote/

EPI research finds that Black, Hispanic, and young workers are among those hit hardest by the COVID-19 recession—facing unemployment rates far beyond what white workers and older workers are facing. The resulting economic challenges—including food insecurity and the threat of eviction, among others—will compound if additional relief doesn't come soon. In addition to economic threats, the health threats of the coronavirus pandemic have affected communities of color far worse than white communities.

Young adults and Black and Hispanic citizens have also been historically underrepresented at the polls, for a variety of reasons that we explore below. But could that change in 2020?

Black voters have faced a 150-year struggle against voter intimidation and suppression tactics and the multilayered legacies of slavery. Black Americans are also disproportionately disenfranchised by state laws that ban convicted felons from voting—even, in some states, after they have served their full sentence. Given the U.S.'s high incarceration rate and systemic racism in the criminal justice system, this is just one more way the Black vote is suppressed.

Hispanic voter turnout has been persistently lower than both Black and white voter turnout: In the 2016 presidential election, Hispanic turnout was reported by the Census Bureau at 47.6%, compared with 65.3% for non-Hispanic white voters and 59.4% for Black voters (Figure A). The reasons for low Hispanic turnout are not necessarily easy to determine and often get told one story at a time. Like Black voters, Hispanic voters have been hampered by voter suppression efforts and face disproportionate disenfranchisement due to felony convictions. Many face language barriers. The Hispanic population is also much younger (with a median age of 30 in 2018) than the white population (with a median age of 44)—and, as discussed below, younger adults are less likely to vote.1 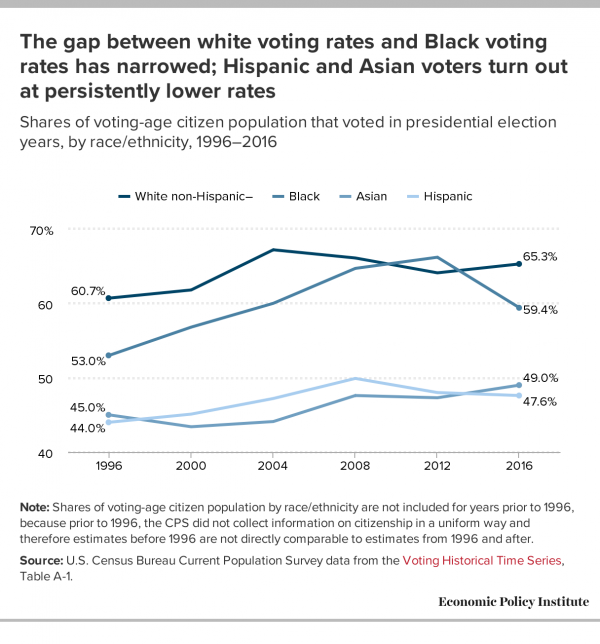 It is well known that voter engagement rises with age (Figure B). Census data show that in the 2016 presidential election, voter turnout among the youngest voters (ages 18–24) was 43.0%, compared with 70.9% for the oldest voters (ages 65 and older). Voting rates for the two cohorts were similar in 2012, at 41.2% and 72.0%, respectively. Young adults face the hurdle of voting for the first time and learning to navigate the voting system in their state. They may also lack confidence that they will be able to make good voting decisions. 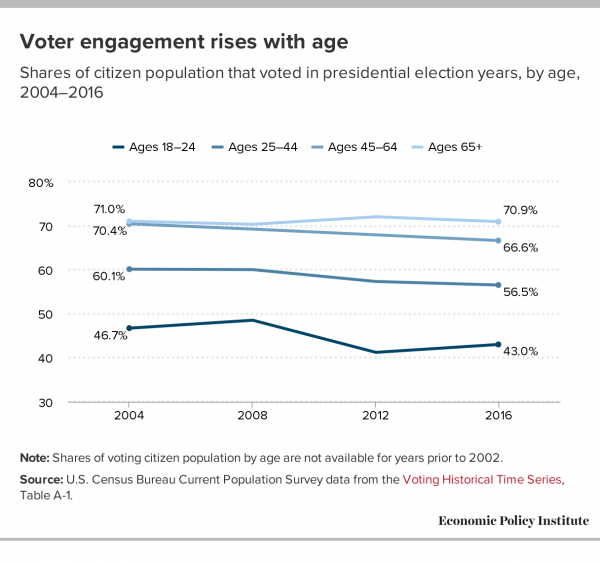 A recent Pew Research Center survey found that 63% of Black registered voters are extremely motivated to vote in the 2020 presidential election. Nationwide, Black eligible voters now make up 12.5% of the U.S. electorate, up from 11.5% in 2000. For many years, Black voters were the largest nonwhite racial or ethnic segment of the country's electorate, but for the first time in a presidential election they will be outnumbered by Hispanic eligible voters, at 32 million.

According to FiveThirtyEight, Hispanic voters are the most likely group to vote by mail in 2020. This may be partially due to the fact that almost half the country's Hispanic population live in states that entirely vote by mail or have high rates of mail balloting. Additionally, states with large Hispanic populations like Arizona, California, and Florida have greatly expanded access to voting by mail in recent years.

The policymakers we elect in 2020 will heavily influence how we as a nation navigate the coronavirus crisis going forward. Those who have been most harmed by current policies have a chance to have their voices heard by the very policymakers who have left them behind during the COVID-19 pandemic.

Racial and economic inequality have left many black workers with few good options for protecting both their health and economic well-being during the coronavirus pandemic. Persistent racial disparities in health status, access to health care, wealth, employment, wages, housing, income, and poverty all contribute to greater susceptibility to the virus—both economically and physically. While policy responses to the crisis have been broad-reaching, they have nevertheless yielded uneven results because of differential access to resources.

Latinx workers have suffered greater economic distress than their white counterparts since COVID-19 began spreading in the United States. These outcomes have been driven by the fact that Latinx workers already had lower pre-pandemic wages, income, and wealth, as well as less access to health care and other important job-related benefits. As the pandemic has spread, another symptom of this labor market disempowerment—inadequate workplace safety—has loomed particularly large. In the midst of this crisis, some policies that appear to be neutral have disproportionately harmed certain populations.

Young workers have been hardest hit by the COVID-19 economic shock. These workers—defined as ages 16–24—are the most likely to be unemployed or underemployed, least likely to be able to work from home, and more likely to work in industries and occupations with the largest job losses in the coronavirus-driven recession. Absent a much more effective policy response than was undertaken following the Great Recession, today's young workers may experience serious and long-term labor market repercussions.

1. The Black population, too, is relatively young, with a median age of 34; despite this, Black voting rates overall have been relatively high in recent years, as discussed above. Unusually high turnout among young Black voters (ages 16–24) in 2008 and 2012—exceeding young white voter turnout by at least 6 points in each of those elections—may have partially mitigated the usual effects of youth on voting rates. (Data on voter turnout are from U.S. Census Bureau Current Population Survey data from the Voting Historical Time Series, Table A-1.)