<p>Millions are getting pushed into poverty,&nbsp;moving&nbsp;from relatively comfortable lives to&nbsp;not knowing where their next meal is coming from.</p>


He couldn't feed his family. Matilde Alonso knew it was true but couldn't believe it. The pandemic had just hit Guatemala in full force and Alonso, a 34-year-old construction worker, was suddenly jobless.

He sat up all alone till late that night, his mind racing, and fought back tears. He had six mouths to feed, no income and no hope of receiving anything beyond the most meager of crisis-support checks -- some $130 -- from the cash-strapped government.

For tens of millions like Alonso, the pandemic has exposed just how fragile economic status is worldwide. In many ways, nowhere has that been more apparent than in Latin America, where a resurgence of poverty is bringing a vicious wave of hunger in a region that was supposed to have mostly eradicated that kind of malnutrition decades ago. From Buenos Aires to Mexico City, families are skipping on meals and swapping fresh produce for starchy and sugary items. Even in Chile, a developing-world success story, some neighborhoods are turning to community cook-ups in a throwback to the dictatorship era of the 1980s. 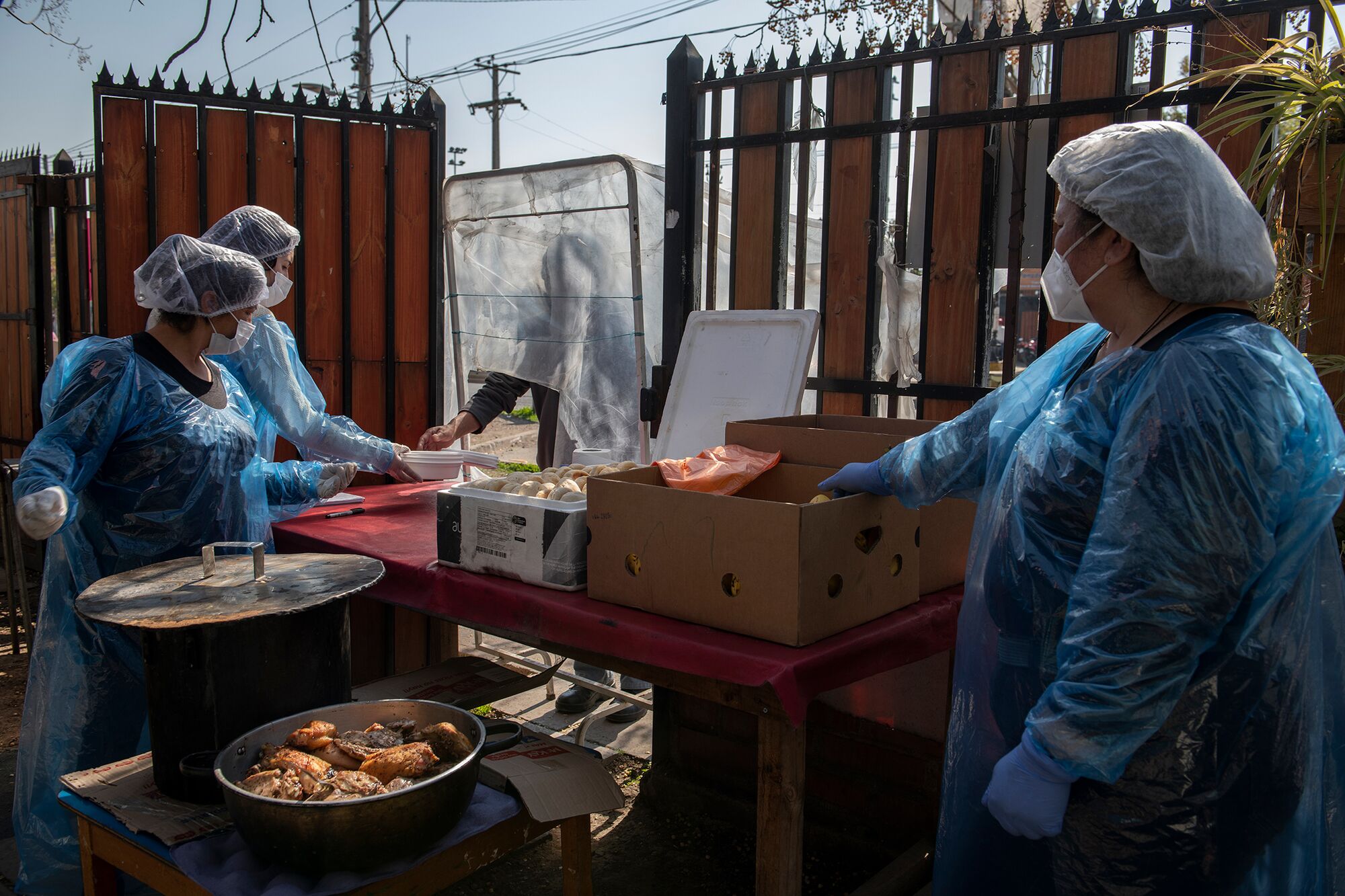 Social workers prepare and serve food during a cook-up in the Lo Hermida neighborhood of Santiago, Chile. Some communities have revived the dictatorship-era "olla comun" communal kitchens to provide aid during the pandemic-driven crisis.
Photographer: Tamara Merino/Bloomberg


Latin America stands out because most of the region's governments don't have the financial might to deliver the huge amounts of aid that's been seen in places like the U.S. and Europe. Then there are the millions of workers who labor in the informal economy, selling mangos from a street cart or cleaning homes for cash, who are often locked out of assistance programs.

The United Nations' World Food Programme estimates that the Latin American and Caribbean nations in which it operates will see a surge of roughly 270% in the number of people facing severe food insecurity over the coming months. That rise -- to 16 million from 4.3 million before the pandemic -- is likely to be the steepest in the world and more than twice the estimated global growth rate, Norha Restrepo, a WFP spokesperson in Panama, said by telephone.

Growing the region's middle class has come in fits and starts. A boom in commodity prices from 2000 to 2014 sparked a decrease in the poverty rate from 27% to 12%. But as demand for raw materials cooled, there was a swift reversal. Argentina sank into deep recession, and the economic situation in Venezuela took an unprecedented dive into despair. Meanwhile, even the earlier period of growth was hiding deep fault lines in the region, where economic inequality, racial tensions and police brutality brewed just beneath the surface. Those pressures boiled over into mass protests last year, with hundreds of thousands taking to the streets in Colombia, Chile and Ecuador.


The pandemic has made economic stability even more precarious, with millions now making the unthinkable move from relatively comfortable lives to not knowing where their next meal is coming from.

Percentage of the population that cannot afford a healthy diet

"The difference between being poor and going poor is brutal," said Jose Aguilar, founder of Reactivemos La Esperanza, which supports 100 families in Costa Rica and is trying to reach more people. "When you're middle class and you have food, access to education and are accustomed to a certain quality of life and all of a sudden it's taken away from you through no fault of your own, that hits families really hard."

The region is on track for its worst recession in a century with a 9.1% contraction forecast for this year and unemployment set to reach 13.5%, according to the Economic Commission for Latin America and the Caribbean, or Eclac. With half the working population living outside of formal economies, job numbers don't tell the whole story. Regionally, Eclac expects an additional 28 million to enter the ranks of extreme poverty this year, with women overrepresented in poor households.

"This economic and health crisis is just starting, and it'll result in the largest number of people living in food scarcity in recent times," said Maria Teresa Garcia, who heads Bancos de Alimentos de Mexico, a food charity. "This crisis is going to leave a mark for a long, long time." 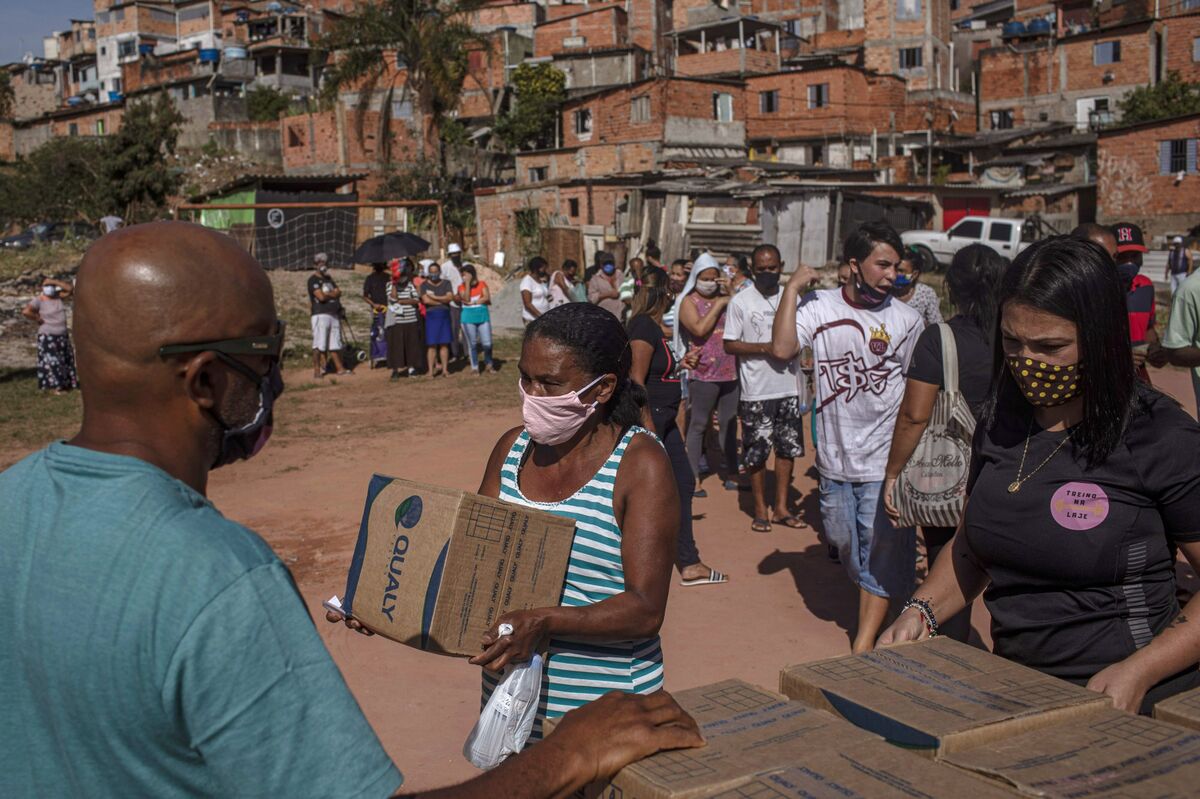 Volunteers distribute boxes of food and hygiene products to residents of a favela in Sao Paulo, Brazil. Brazil has combatted economic distress with cash stipends and aid that is bringing down rates of extreme poverty.
Photographer: Victor Moriyama/Bloomberg

Other parts of the world are also seeing the reversal. The World Bank in June warned that the pandemic could undo years of progress for the poor in less-developed nations such as India and Nigeria, with as many as 100 million more people expected to fall into extreme poverty. With that, there will be a massive spike in food inequality. As many as 132 million more people than previously projected could go hungry in 2020, and this year's increase may be more than triple any this century, according to UN estimates. Latin America is helping to lead that surge.

In Chile, Sonia Gallardo has gone from eating dinners of chicken and rice to washing down bread and butter with coffee. Sometimes it's only coffee.

She immigrated from Peru 12 years ago for a better life in Chile, leaving behind an old two-room adobe house in Chiclayo that had been passed down to her mother. Working as a houskeeper in Santiago, she used to make $600 a month, enough to start saving for a home of her own. But strict lockdowns ended that job, and now she's lucky to make $80 a month reselling cleaning products in the city's bustling markets. There's barely enough for groceries. She's suddenly dropped 10 pounds and is adding elastic to her pants to keep them from falling down.

"I never thought this was going to happen. I thought that I would never have to live like I lived in Peru again," Gallardo said. 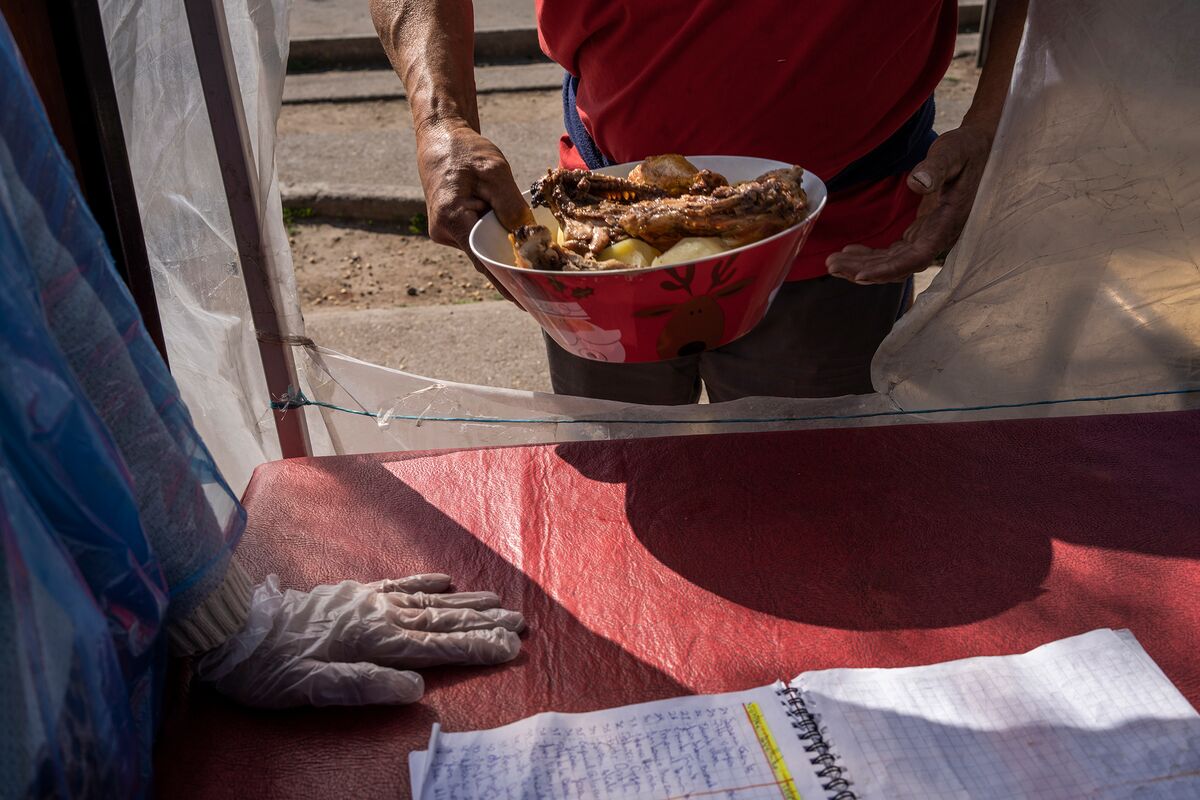 A resident receives a meal at the "olla comun" in Lo Hermida. The community meals are funded with donations that are starting to stretch thin.
Photographer: Tamara Merino/Bloomberg

Like most of the world, the hunger gripping Latin America has nothing to do with insufficient supply. In fact, the region is an agricultural powerhouse, with its fertile plains and valleys producing grains, fruits and proteins that help feed the world. The crisis is about whether those thrown out of work during the pandemic can afford to eat.


For the most part, aid from governments is far outstripped by the need, even if some countries decided to implement aggressive stimulus packages. Brazil, for example, has started an emergency cash stipends program so ambitious that it temporarily helped bring down extreme poverty readings to national historic lows. But that massive program is expiring at the end of the year and is too fiscally expensive to sustain further. In most countries, payments are limited and people spend any cash they get to first pay for housing and utility costs. There's often little left over for food.

In Argentina, Miguel Leiva pulled himself out of the unemployment and drugs of a Buenos Aires slum, and he now supports his wife and two children as a bus driver and is training to be a primary-school teacher. The country's 41% inflation is eating into his $525 a month salary, and strict lockdowns mean he can no longer work extra hours. He's behind on credit-card and utility payments and weekly barbecues of Argentina's famed short ribs are now "a luxury we can't afford." The family has also cut back on fruit and vegetables. Chocolate biscuits, loaded with sugar, have replaced expensive yogurts, while the family's intake of flour for homemade pasta has jumped by as much as tenfold.

"It's the same for everyone," Leiva, 45, said. "We may eat OK for two weeks, but then it's a case of surviving until the end of the month and the next paycheck." 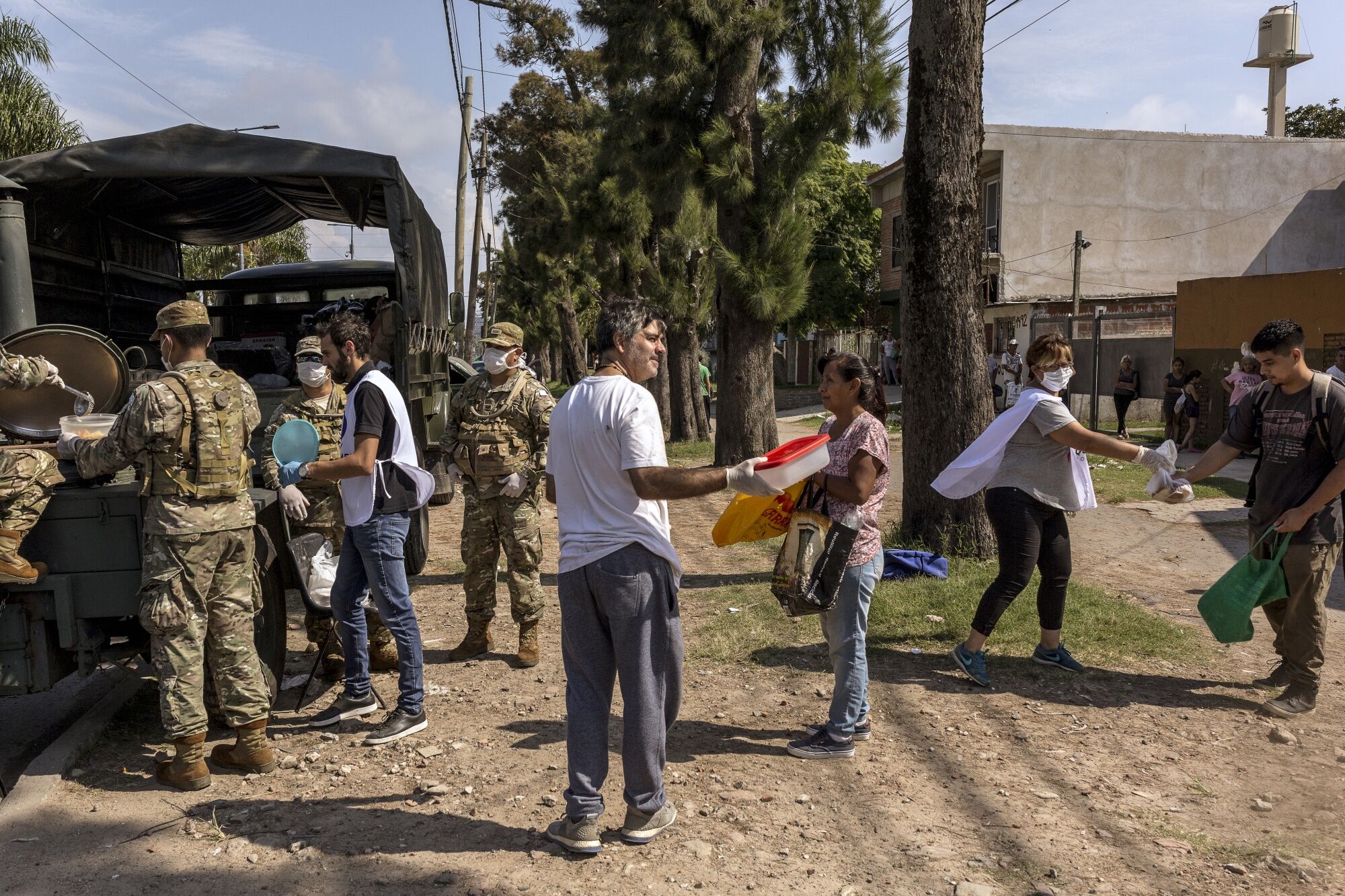 At the start of the pandemic in March, the Argentine government sent members of the military to distribute food to residents. Argentina's prolonged lockdowns have affected the economy as the country slides into its third consecutive year of contraction, pushing more people into poverty.
Photographer: Sarah Pabst/Bloomberg

An undernourished population typically means more costly visits to doctors and hospitals, a less productive workforce and more school absenteeism. Most concerning to the UN are the implications for development of young children. Food insecurity also risks exacerbating unrest after the wave of protests in 2019.

In such a diverse region, the economic impact from the pandemic is uneven. Poorer countries like Haiti and parts of Central America that rely on remittances are particularly vulnerable. As are the millions of Venezuelan migrants in Colombia, Ecuador and Peru who depend on informal work and lack access to social programs. Tens of thousands of them are returning home, bringing more mouths to feed in Venezuela, which was already on the brink of famine.


Even in more developed countries such as Chile, some communities are having to band together to ensure people are fed.

In the Santiago neighborhood of Lo Hermida—known for its participation in social struggles especially during the military dictatorship of the 1970s and 1980s—Erika Martinez is organizing "common pots," or community cook-ups, that have fed about 300 people a day since May.

The food is mostly noodles and legumes. Local butchers or grocers sometimes kick in leftovers, and chicken is a rare treat. The cooking is done with firewood because there's no money for gas. The clientele is mainly informal workers such as part-time tradesmen, gardeners or seamstresses who've been hit the hardest by pandemic lockdowns.

"For us in Lo Hermida, the common pots represent a sad memory of the 80s," said 53-year-old Martinez. "I never thought we would have to go back to that." 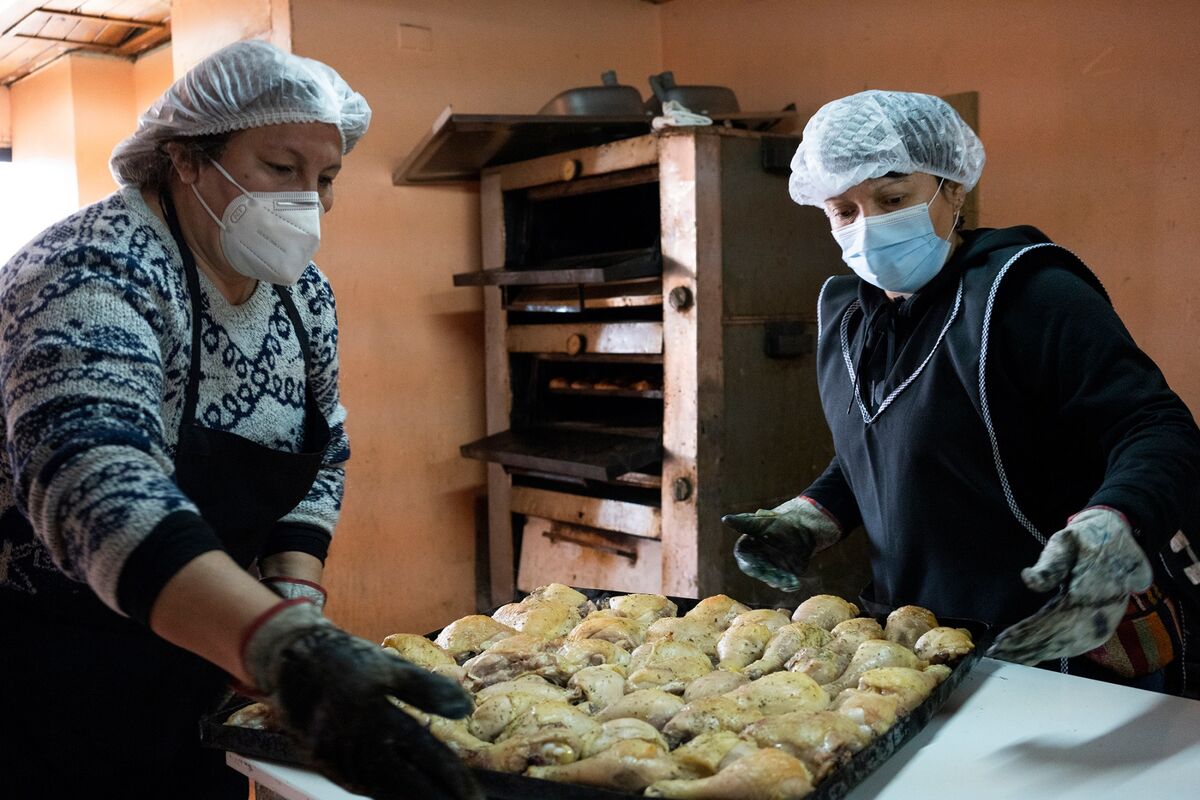 Erika Martinez, left, prepares over 100 pieces of roasted chicken to be served at the "olla comun." Her community kitchen has fed about 300 people a day since May.
Photographer: Tamara Merino/Bloomberg

Back in Guatemala, the government has already reported an increase in the rate of acute malnutrition among children aged 5 and under. Alonso, the construction worker, is so worried about how to keep his four kids fed that he's started planting corn and beans. A friend leased him a small plot of land. Another gave him some seeds and fertilizer and told him he can have until the end of the year to pay back the cost, he said.

"It's what I've been doing all pandemic long — improvising as best I can."


— With assistance by Ezra Fieser, Nicolle Yapur, Tatiana Freitas, Andrea Navarro, and Andrew Rosati
Posted by The Red Caboose at 4:08 AM