State and local governments have lost 1.5 million jobs since February: Federal aid to states and localities is necessary for a strong economic recovery [feedly]

State and local governments have lost 1.5 million jobs since February: Federal aid to states and localities is necessary for a strong economic recovery
https://www.epi.org/blog/state-and-local-governments-have-lost-1-5-million-jobs-since-february-federal-aid-to-states-and-localities-is-necessary-for-a-strong-economic-recovery/

June's national jobs report from the Bureau of Labor Statistics (BLS) showed that there was a 4.8 million increase in jobs, after many states reopened their economies prematurely and accelerated the spread of COVID-19. Despite this uptick in employment, there are still 14.7 million fewer jobs than before the pandemic hit. Of these losses, 1.5 million were in state and local government—a sector which disproportionately employs women and Black workers. In mid-July, BLS released their June state-level jobs report, allowing us to take a closer look at these public-sector losses across the country. 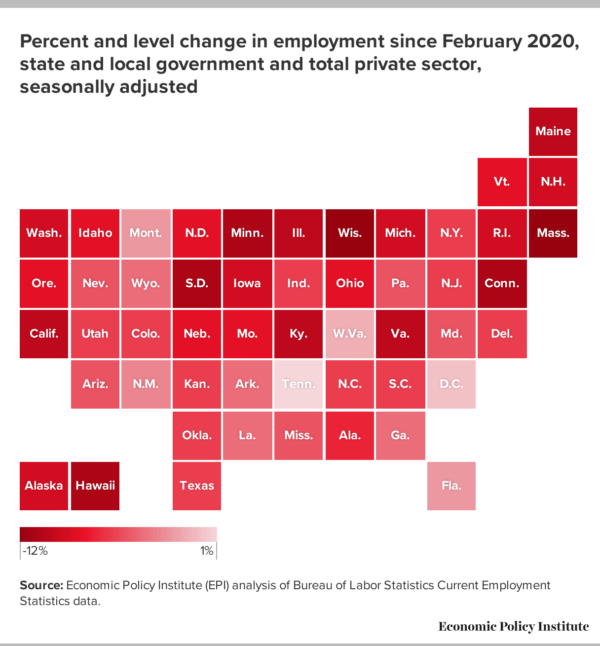 Next, we take a closer look at job losses in the largest subset of state and local government: education. Over half (51.0%) of state and local government workers are employed in public schools, colleges, or universities, and nearly a third (31.4%) are teachers or teaching assistantsi. Public education plays a critical role in our society: not only is education itself a vital good, but schools are also part of our social safety net—through school-based supports such as meals, health, clinics, counseling, and even housing. In normal times, elementary schools also serve as an important source of childcare. This has made schools a prime target for policymakers pushing for a hasty and haphazard reopening, which risks the health of school employees and the families of students (many of whom live with seniors).

Public K-12 education employment has never recovered from the austerity measures that unfolded following the Great Recession and has fallen precipitouslyduring the pandemic. To enable and improve virtual learning, schools will need more resources and staff, not budget cuts. If schools are going to reopen, they should be guided by public health and education experts. This requires enough staff, resources, and personal protective equipment to put the necessary social distancing and safety protocols in place.

Figure B shows the percent and level change in state and local education employment since last June. In 17 states, more than one in 10 jobs in this sector were lost, with more than one in seven lost in Alaska (-21.7%), Hawaii (-21.6%), Wisconsin (-18.9%), Massachusetts (-16.6%), and South Dakota (-14.6%). BLS does not publish data for state and local government employment in Missouri or the District of Columbia. Table 2, at the end of this post, displays the data from this map as well as the employment levels in June 2019 and June 2020.

Please note that the data in Figure B are not seasonally adjusted, because BLS doesn't seasonally adjust state and local government education employment data at the state level. This means it is not directly comparable to the seasonally adjusted state and local government employment data that we have been examining so far. As a result, we will be looking at the changes between June 2019 and June 2020, rather than the changes since February. As schools close for the summer, there naturally would be a seasonal drop in education employment between February and June. By comparing the most recent data to the same month last year, we are cutting through the seasonal noise to measure the employment effects of the pandemic and recession. 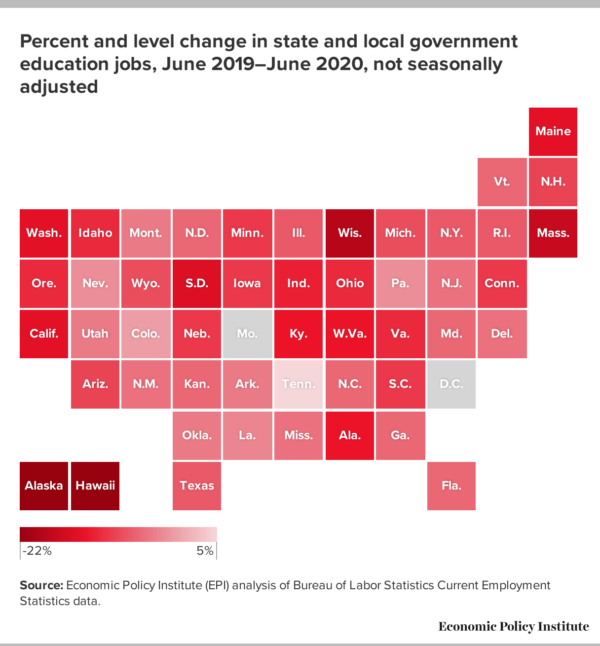 There is a clear need for policies that will both address the immediate challenges of the pandemic and set us up for a quick, strong, and sustainable recovery. If federal policymakers do not step in to provide aid to state and local governments facing budget shortfalls, the economic pain will only get worse. Without federal aid, we stand to lose 5.3 million additional jobs—in the private and public sectors—by the end of 2021. This aid would require the federal government to take on additional debt, but that is exactly what we should be doing to ensure a strong recovery.

By not providing federal aid, policymakers would also be sentencing the economy to a prolonged depression, like the one caused by the budget cuts imposed in the aftermath of the Great Recession. We should heed the lessons learned from the last recovery, namely that public-sector cuts translated into private-sector job losses, and that states that did not take the path of austerity had a much stronger recovery.

Right now, state and local government workers are on the front lines of the dual health and economic crises, providing public health services, administering critical economic lifelines like unemployment insurance, and adapting to teaching online. State and local governments face restrictions on how they can borrow to fund these services and declining tax revenues are exacerbating their budget constraints. Substantial federal aid is necessary to prevent cuts to their budgets, services, and staffing.

Long wait times for unemployment insurance claims to be processed—or even just to have questions answered—in the early months of the pandemic demonstrated the importance of having well-resourced and adequately staffed agencies to administer public services when they are desperately needed. This means investing in these services during times of crisis and as we recover, so that the next time disaster strikes we will be ready to help those in need. Aid to state and local governments means ensuring that we still receive range of services that are in the public interest, including trash pickup, keeping roads safe, maintaining sewers, running libraries, and administering support programs.

-- via my feedly newsfeed
Posted by The Red Caboose at 3:52 AM