Almost four months in, joblessness remains at historic levels: Congress must extend the extra $600 in UI benefits, which expires in a little more than two weeks [feedly]

Almost four months in, joblessness remains at historic levels: Congress must extend the extra $600 in UI benefits, which expires in a little more than two weeks
https://www.epi.org/blog/almost-four-months-in-joblessness-remains-at-historic-levels-congress-must-extend-the-extra-600-in-ui-benefits-which-expires-in-a-little-more-than-two-weeks/

It's important to note that some initial claims from last week are likely from people who got laid off prior to last week but either waited until last week to file a claim, or applied earlier and their application had been caught in an agency backlog. Why do I think that's likely? In May, there were more than 8 million initial claims in regular state UI programs, but last week's Job Opening and Labor Turnover Survey (JOLTS) data show there were only 1.8 million layoffs, which is back to pre-virus levels. This suggests many May UI claims were from earlier layoffs, and that dynamic is likely still in play.

Figure A shows continuing claims in all programs over time (the latest data are for June 20). Continuing claims are more than 31 million above where they were a year ago. The latest figure in "other programs" in Figure A is 1.2 million claims. Most of this (0.9 million) is Pandemic Emergency Unemployment Compensation (PEUC). PEUC is the additional 13 weeks of benefits provided by the CARES Act for people who have exhausted regular state benefits. The number of people on PEUC can be expected to grow dramatically as the crisis drags on and more and more of the nearly 17 million people currently on regular state benefits exhaust their regular benefits and move on to PEUC. 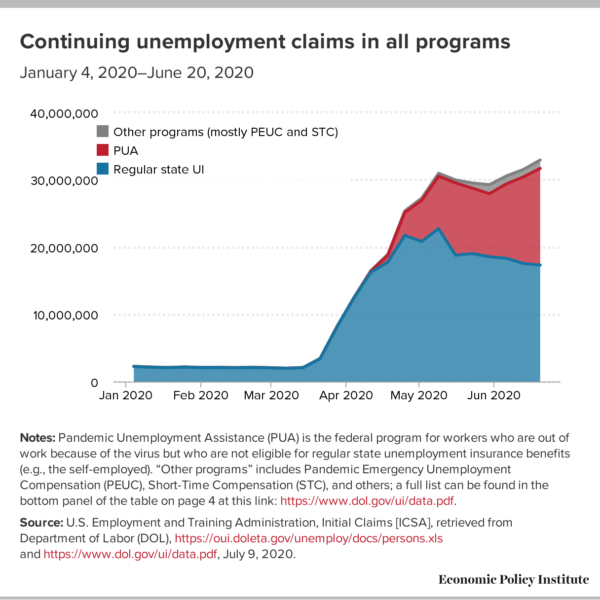 "Other programs" in Figure A also includes Short-Time Compensation (STC). STC is a great alternative to layoffs where employers reduce work hours rather than lay off workers, and workers get partial UI. But DOL reports that just 360,000 workers are receiving STC.

Figure A only covers continuing claims through June 20, but Figure B combines the most recent data on both continuing claims and initial claims to get a measure of the total number of people "on" unemployment benefits as of July 4th. DOL numbers indicate that right now, 35.8 million workers are either on unemployment benefits, have been approved and are waiting for benefits, or have applied recently and are waiting to get approved. That is more than one in five workers. But a note of caution: while regular state UI and PUA claims should be completely non-overlapping—that is how DOL has directed state agencies to report them—some states may be misreporting claims, so there may be some double counting. Further, some states may be including some back weeks in their continuing claims. 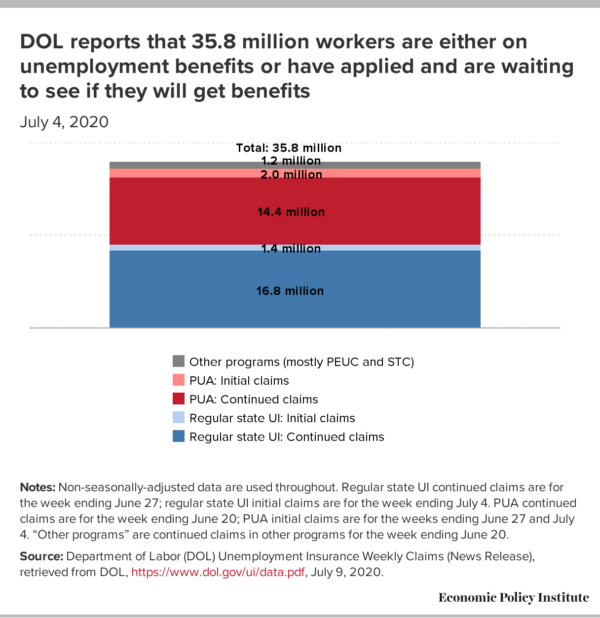 Note that of the 35.8 million workers DOL's numbers indicate are "on" unemployment benefits, close to half (45.8%) are on PUA. This is a stark reminder of the huge gaps are in our regular state UI programs and how important it is that Congress established PUA, and continue to fund it.

Today's data highlight the deep recession we are now in. It's important to remember that this recession is exacerbating existing racial inequalities by causing greater job loss in Black households than white households. Policymakers must do much more. For starters, they need to extend the across-the-board $600 increase in weekly unemployment benefits, which was probably the most effective part of the CARES Act. The extra $600 expires in a little more than two weeks (the CARES Act says the $600 applies to weeks "ending on or before July 31," which is a Friday. Since, in the UI world, weeks typically end on Saturday, the last payment will be for the week ending July 25).

Letting the extra $600 expire would be a disaster for UI recipients, who would have to drastically cut their spending, and for the economy, which is being held afloat by this spending. Letting the $600 expire would cost more than 5 million jobs over the next year. Federal lawmakers also need to provide massive aid to state and local governments. Without it, 5.3 million workers in the public and private sector will lose their jobs by the end of 2021.