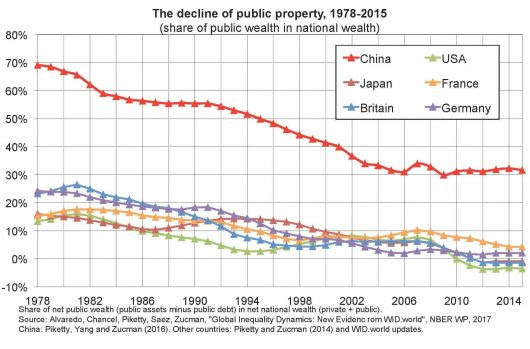 The present economic debate is over-determined by two realities which, moreover, are connected as we sometimes tend to forget. On one hand we have the steady rise in public debt and, on the other, the prosperity of privately owned wealth. The figures for the level of public debt are well known; almost everywhere the level approaches or exceeds 100% of national income (the equivalent of almost one year of gross domestic product) as compared with barely 30% in the 1970s. Far be it from me to minimise the extent of the problem: it is the highest level of public debt since World War Two and historical experience demonstrates that it is difficult to reduce this level of debt by ordinary means. This is precisely why, to get a clear idea of the issues at stake and the alternatives, it is essential to put this reality into perspective by relating it to developments in the structure of the property as a whole.

Briefly: the totality of what is owned in a country can be broken down into public capital, which is the difference between public assets (these include buildings, land, infrastructures, financial portfolios, shares in companies, etc. held by public authorities in different forms: State, municipalities, etc.) and public debt on one hand; and private capital, that is the difference between household assets and debts, on the other.

During the post-war boom (the Trente Glorieuses) public assets were very considerable (approximately 100-150% of national income, as a result of a very large public sector, a consequence of post-war nationalisations), and significantly higher than public debt (which was historically low at less than 30% of national income – after inflation, the cancellation of debts and the one-off levies on private capital in the years 1945-1955).

In total, public capital – net of debt – was largely positive, in the range of 100% of national income, despite the rising prices in real estate and on the stock market. At the same time, the public debt was approaching 100% of national income, with the result that net public capital became almost zero. On the eve of the crisis in 2008, it was already negative in Italy. The most recent data available for 2015-2016 shows that net public capital has become negative in the United States, Japan and the United Kingdom. In all these countries, the sale of the total public assets would not be sufficient to repay the debt. In France and in Germany net public capital is only just positive.

But this does not mean that rich countries have become poor: it is their governments which have become poor, which is very different. In fact, at the same time, private wealth – net of debt – has risen spectacularly. In the 1970s, private wealth represented 300% of national income in the 1970s, whereas in 2015 it had risen to, or exceeded, 600% in all the rich countries. This prosperity in private wealth is due to multiple causes: the rise in property prices (conglomeration effects in larger metropolitan areas), the aging of the population and decline in its growth (which automatically increases savings accumulated in the past in relation to current income and contributes to inflating the prices of assets) and also, of course, the privatisation of public assets and the rise in debt (which is held in one form or another by private owners, via the banks). One might add the very high returns obtained by the highest financial assets (which structurally grow faster than the size of the world economy) and an evolution in the legal system globally very favourable to private property owners (both in real estate and in intellectual property). The fact remains that private capital grew much faster than the decline in public capital, and that rich countries themselves hold and even a little more (in total, rich countries hold more financial assets in the rest of the world than the contrary).

Why be so pessimistic in the face of such prosperity? Simply because the ideological and political balance of power is such that public authorities are not able to make the main beneficiaries of globalisation contribute their fair share. The perception of this impossibility of a fair tax sustains the flight towards the debt. This feeling of disempowerment is reinforced by the unprecedented extent of economic and financial interdependence; each country is owned by its neighbours, particularly in Europe where there is a profound impression of loss of control.

Historically, major changes in the structure of property ownership often come together with profound political changes. We see this with the French Revolution, the American Civil War, the Euro-World Wars in the 20th century and the Libération in France. The nationalist forces at work today could lead to a return to national currencies and inflation, which would promote a chaotic redistribution of resources, at the expense of severe social stress and an ethnicisation of political conflicts. In the face of this fatal risk to which the present status quo could lead, there is only one solution. We must chart a democratic pathway out of the impasse and organise the necessary redistribution of resources within the framework of the rule of law.

(the figure on the share of public capital in national capital, also referred to in my last chronicle « On inequality in China« , is extracted from the following article: F. Alvaredo, L. Chancel, T. Piketty, E. Saez, G. Zucman, « Global Inequality Dynamics: New Findings from WID.world« ; data series in xlsx format are available here; all series can also be accessed on WID.world)