How globalisation affected manufacturing around the world

How globalization affected manufacturing around the world

In defending trade from misguided protectionism, economists argue that the main killer of manufacturing employment around the world has been technology, not trade. This column explores how globalization has caused the sectoral structures of countries to conform more closely to their factor endowments. In the skill-abundant developed regions, manufacturing became more skill-intensive, while in skill-scarce and land-scarce Asia, labor-intensive manufacturing expanded. In land-abundant developing Africa, Latin America, and the Middle East, by contrast, manufacturing contracted.

In defending trade from the misguided protectionism of President Trump, economists argue that deindustrialisation is inevitable in advanced economies, not a result of globalisation, and that in all countries the main killer of manufacturing employment has been technology, not trade (DeLong 2017, Sandbu 2017, Wolf 2017). Rodrik (2016) argues that developing countries, too, have deindustrialised – prematurely – an outcome that he attributes more to trade than to technology, though the role of trade has been partly to propagate a technology-driven relative price trend that originated in advanced economies.

Global analysis of structural change over the past three decades reveals a rather different and clearer picture (Wood 2017). For the world as a whole, the shares of manufacturing in exports, output and employment have not changed much. They have fallen in some countries, and risen in others. Moreover, the pattern of change has been what trade theory would predict – rises where endowments of immobile factors confer comparative advantage in manufacturing and falls where they do not. Among other changes, globalisation caused unskilled-labour-intensive manufacturing and its associated employment to contract in the skill-abundant North and to expand in the skill-scarce South. 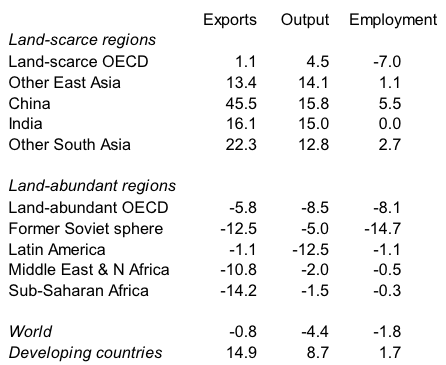 The last two rows of Table 1 show that from 1985 to 2014, manufacturing's share of merchandise exports hardly changed for the world as a whole, but rose substantially for all developing countries combined. Its share of global goods output declined by four percentage points at world level, but rose by nine points in developing countries. These changes would look less positive for manufacturing if the share denominators included services, which expanded everywhere, but more positive if calculated at constant prices, because the relative price of manufactures fell. For example, for developing countries in aggregate, the share of manufactures in GDP at current prices hardly changed, and at constant prices rose substantially (Haraguchi et al. 2017).

Worldwide, manufacturing's share of employment fell slightly during this period, but rose in developing countries. The numbers in the table refer to 'formal' manufacturing jobs in firms covered by industrial surveys, omitting most small firms and the self-employed. Calculations using data for all manufacturing employment yield similar results – a small decline worldwide and a rise in developing countries – and are robust to different methods of filling the many gaps in the underlying sources (Felipe and Mehta 2016, Haraguchi et al. 2017).1

The top ten rows of Table 1 show changes by region. The regional categories are mainly self-explanatory, but the OECD is defined in terms of its membership at the start of the period and divided between the land-scarce countries of Western Europe and Japan and the land-abundant ones of North America, Scandinavia, and Australasia. The regions are divided into two groups on the basis of their land-labour ratios (surface area per adult), and within each group are in descending order of their skill-labour ratios, measured by average adult years of schooling. All the numbers are aggregates (averages weighted by country size).

Even at the start of the period, the sectoral structures of regions varied in accordance with their endowment-based comparative advantages (Wood 2017). As Heckscher-Ohlin theory – and common sense – predict, regions with higher land-labour ratios produced and exported more primary products and fewer manufactures than those with lower land-labour ratios. Regions with higher skill-labour ratios also produced more manufactures, and within manufacturing produced more skill-intensive and fewer labour-intensive goods.

Between 1985 and 2014, this endowment-related pattern of sectoral specialisation intensified. The changes in manufacturing export and output shares in the first two columns of Table 1 are negative in all the land-abundant regions and positive in all the land-scarce ones.2 These shares relate only to goods, but adding services to their denominators does not alter the directions of change, except for the land-scarce OECD and for China, in both of which the share of services rose steeply (in China's case, because of its unusually low starting point).

The regional changes in manufacturing employment shares in the third column show the same pattern – falls in land-abundant regions and rises in land-scarce regions – with two exceptions. One is the lack of change in India, despite rises in manufacturing's export and output shares, reflecting failure to expand labour-intensive manufactured exports because of high illiteracy, lack of infrastructure, and restrictive policies.3 The other exception is the fall in the land-scarce OECD (as in the land-abundant OECD), reflecting the shift in developed countries from labour-intensive to skill-intensive manufacturing activities.

At first sight, given the rises in trade-GDP ratios in all regions, this pattern looks like a straight Heckscher-Ohlin story, in which reduction of barriers to trade aligned the sectoral structures of regions more closely with their factor endowments. Regressions using country-level data support this story, in the sense of yielding results similar to those for regions in the table.

The regression results also show, however, that this cannot be the whole story, for two related reasons. First, the closeness of fit between sectoral structures and endowments did not always improve. Second, some of the changes in sectoral structure occurred because of changes in the underlying relationships between structure and endowments. The comparative advantage of land-scarce countries in manufacturing became stronger, as did the comparative advantage of skill-abundant countries in more skill-intensive sorts of manufacturing.

More concretely, it caused knowhow in labour-intensive manufacturing to flow from skill-abundant developed countries to skill-scarce (but literate) developing countries, and within the latter group mainly to land-scarce countries, whose endowment mix offered the best prospects of putting this know-how to profitable use in the world market. This flow reinforced the HO pattern of sectoral specialisation, though its effects on wages and other factor prices differed in some important ways from HO predictions (Wood 2017: 23-4).

Some skill- and land-scarce countries did not participate in this process. India is the biggest example, but other smaller countries with suitable endowments were also excluded by lack of basic education and infrastructure or by instability and conflict. The outcomes were also strongly influenced by China, omitting which would reduce the rises in developing country manufacturing shares in the last row of Table 1 to 5.2, 1.9 and 0.1 points for exports, output, and employment, respectively. But omitting China has little effect on the regressions – how sectoral shares changed in relation to endowments was common to most countries.5

That the directions of structural change around the world over the past three decades were so clearly related to factor endowments confirms the influence of globalisation. In the future, barriers to trade and cooperation will change further, robotisation will alter the relative factor intensities of goods, and the relative endowments of countries will shift. Sectoral structures in the decades ahead are thus subject to much uncertainty, but will continue to be shaped by differences among countries in land abundance and skill supplies (Wood 2017: 24-5).

The most significant effect of globalisation on the sectoral structure of developed countries during 1985-2014 was to accelerate the decline of manufacturing employment, particularly for less-skilled workers. The failure of governments to pay enough attention to the resulting social problems eventually led to the current political backlash against globalisation. 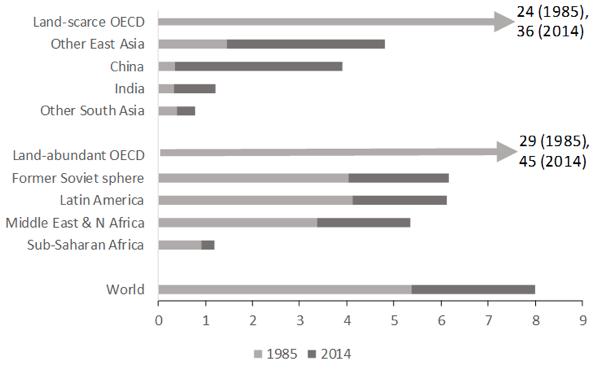 For developing countries, the most significant effect of globalisation on sectoral structure was to widen the differences between the development trajectories of land-scarce and land-abundant countries, tending to expand manufacturing in the former group and to contract it in the latter group. As shown in Figure 1, this divergence was associated with catch-up of per capita GDP by land-scarce developing regions, both on land-abundant developing regions (which were initially richer) and on developed countries. The land-scarce regions benefited from the biased transfer of technology, as well as from faster reallocation of resources to more productive sectors (McMillan et al. 2014), although land-abundant regions benefited from an offsetting improvement in their terms of trade (not captured in these data).

As Figure 1 also shows, the average incomes of both land-scarce and land-abundant developing regions are still far below those of developed countries, and to catch up would require both groups to improve in many of the same respects. Some of the specifics of development policy, however, differ between land-scarce and land-abundant countries (Wood 2003: 192-4), including a greater need in land-abundant countries for supply-side efforts to increase schooling, because primary production generates less demand for it. In these respects, as well as in the areas where their priorities overlap, intelligent support from the international community can help both groups of developing countries.

DeLong, B (2017) "NAFTA and other trade deals have not gutted American manufacturing – period", Vox.com.

Haraguchi, N, CCheng and E Smeets (2017) "The importance of manufacturing in economic development: Has this changed?", World Development, 93: 293-315.

McMillan, M, D Rodrik and I Verduzco-Gallo (2014) "Globalisation, structural change and productivity growth, with an update on Africa", World Development, 63: 11–32.

Wood, A (2003), "Could Africa be like America?", In B Pleskovic and N Stern (eds), Annual Bank Conference on Development Economics 2003, World Bank and Oxford University Press.

[1] For example, using the data from Haraguchi et al. (2017), the share of all manufacturing in employment falls by 2.0 points worldwide and rises by 1.1 points in developing countries (Wood 2017, table 6).

[2] McMillan et al. (2014) drew attention to the combination of deindustrialisation in developing Africa and Latin America, and industrialisation in developing Asia (as does Rodrik 2016), and linked these differences with comparative advantage and factor endowments, but relied mainly on unweighted averages and unweighted regressions for a few regions. Haraguchi (2014) was the first to use global aggregates and discover that developing countries collectively had not deindustrialised, a key insight developed further by Felipe and Mehta (2016) and in Haraguchi et al. (2017).

[5] Though if China had remained closed, other developing countries in aggregate would have become more industrialised (Wood and Mayer 2011)
.

--
John Case
Harpers Ferry, WV
The Winners and Losers Radio Show
7-9 AM Weekdays, The EPIC Radio Player Stream,
Sign UP HERE to get the Weekly Program Notes.
Check out Socialist Economics, the EPIC Radio website, and
The Poets and Mechanics Quaker Worship Group
Posted by The Red Caboose at 6:12 AM