Millions of workers are relying on unemployment insurance benefits that are being stalled and slashed
https://www.epi.org/blog/millions-of-workers-are-relying-on-unemployment-insurance-benefits-that-are-being-stalled-and-slashed/

Last week 1.3 million workers applied for unemployment insurance (UI) benefits. More specifically, 832,000 applied for regular state unemployment insurance (not seasonally adjusted), and 489,000 applied for Pandemic Unemployment Assistance (PUA). Some headlines this morning are saying there were 963,000 UI claims last week, but that's not the right number to use. Instead, our measure includes PUA, the federal program that is supporting millions of workers who are not eligible for regular UI, such as the self-employed. We also use not seasonally adjusted data, because the way Department of Labor (DOL) does seasonal adjustments (which is useful in normal times) distorts the data right now.

In an unserious move of political theater, the Trump administration has proposed starting up an entirely new system of restoring wages to laid-off workers through executive order (EO). But even in their EO wishlist, the Trump administration would slash the federal contribution to enhanced unemployment benefits in half, to $300. This inaction and ongoing uncertainty is causing significant economic pain for workers who have lost their job during the pandemic and their families. It also causes an administrative hassle for state agencies that have already struggled immensely to process the huge number of claims early in the pandemic and implement the new UI protections in the CARES Act. Since the states with the least stable UI systems also have the highest populations of Black and Latinx people, existing inequalities will likely deepen even further by both the cutoff of supplementary benefits and the increased chaos introduced by having presidential EOs pretend to stand in for the legislative action that is needed.

Cutting UI benefits is directly harmful not just to the individual workers who rely on them, but to the economy as a whole. The additional $600 in benefits allowed for a large amount of spending, sustaining these workers' effective demand for goods and services even in the face of joblessness. If the Trump administration gets their way and these benefits are cut in half, it would cause such a large drop in spending that it would cost us 2.6 million jobs over the next year.

During the pandemic, Black and brown communities have suffered disproportionately on the front lines and in the unemployment lines. Black women in essential occupations are paid less than white men for doing the same vital work. At the same time, Black and Hispanic workers have seen higher unemployment rates than white workers in this recession, meaning they are disproportionately harmed by the cut to UI benefits. These communities, and Black women in particular, should be centered in policy solutions.

Some have argued that the additional benefits create a disincentive for workers to return to the workforce. However, studies—including one conducted by Yale economists—found no evidence that recipients of more generous benefits were less likely to return to work. Further, there are millions more unemployed workers than job openings, meaning millions will remain jobless no matter what they do. In short, the primary constraint on job growth in the near term is depressed demand for workers, not workers' incentives. In any case, our top priority as a country should be protecting the health and safety of workers and our broader communities by paying workers to stay home when they feel safer not working in person (or feel their families' welfare is improved by them not working in the pandemic), whether that means working from home some or all of the time, using paid leave, or claiming UI benefits. The recent spikes in coronavirus cases across the country—and subsequent re-shuttering of certain businesses—show the devastating costs of reopening economic sectors prematurely.

Figure A combines the most recent data on both continuing claims and initial claims to get a measure of the total number of people either receiving or planning to receive unemployment benefits as of August 8. DOL numbers indicate that right now, 29.7 million workers are either on unemployment benefits, have been approved and are waiting for benefits, or have applied recently and are waiting to get approved. But importantly, Figure A provides an upper bound on the number of people "on" UI, for two reasons: (1) Some individuals may be being counted twice. Regular state UI and PUA claims should be non-overlapping—that is how DOL has directed state agencies to report them—but some individuals may be erroneously counted as being in both programs; (2) Some states are likely including some back weeks in their continuing PUA claims, which would also lead to double counting (the discussion around Figure 3 in this paper covers this issue well). 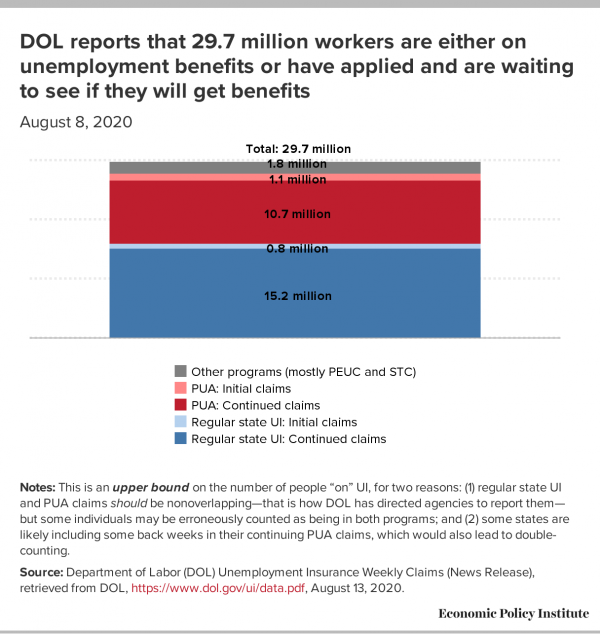 Figure B shows continuing claims in all programs over time (the latest data are for July 25). Continuing claims are 26.6 million above where they were a year ago. However, the above caveat about potential double counting applies here too, which means the trends over time should be interpreted with caution. 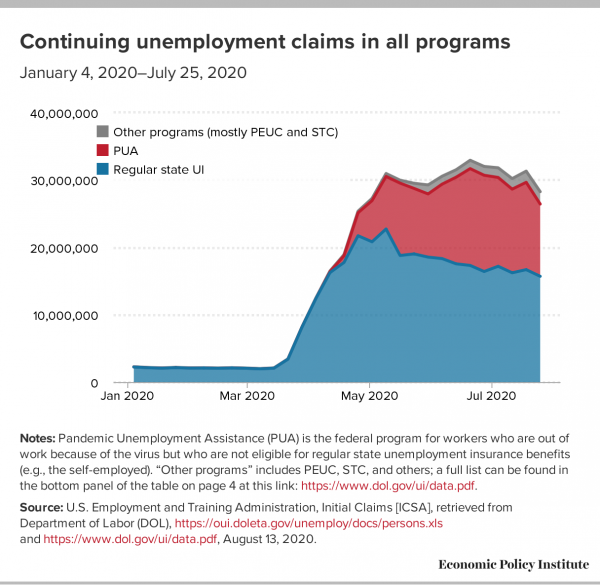 As the pandemic drags on, many workers are facing long-term joblessness. The number of people claiming Pandemic Emergency Unemployment Compensation (PEUC), the 13 additional weeks of benefits available to workers who have exhausted the 26 weeks of regular benefits, increased by 67,000 during the week of July 25. However, it is clear that even this 13 week extension is not enough to meet the needs of many workers, and policymakers should extend it even further. As evidence of this, the Extended Benefits program, which provides an additional 13 weeks of benefits after PEUC, had a 56,000 increase in claimants during the week of July 25. There are now 126,000 workers claiming Extended Benefits, the highest number so far this recession, and every state meets the high unemployment threshold that is required for these benefits to kick into effect. Congress must not allow another crucial provision to lapse.

-- via my feedly newsfeed
Posted by The Red Caboose at 3:06 PM