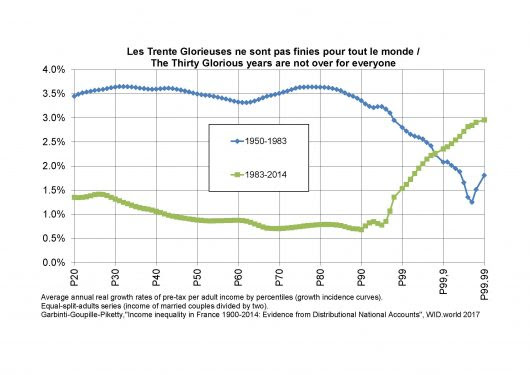 A long-standing legend has it that France is a profoundly egalitarian country which has miraculously escaped the sharp rise in inequality observed elsewhere. If so, how can we explain the anxiety provoked by globalisation and by Europe which is expressed so forcefully in this presidential campaign? In the first instance by recognising that  this great national myth of France as egalitarian and an exception to the rule is grossly exaggerated and, secondly, because it is too often used by the dominant groups to justify our own national hypocrisy.

There is nothing new here. France was the last country to adopt a progressive income tax, and did so under the Law of 15 July 1914, voted in extremis to finance the war. In contrast, this tax had already been introduced in Germany, the United Kingdom, Sweden, the United States and Japan, sometimes decades previously, to finance schools and public services. Until 1914, the political and economic elites in the Third Republic had stubbornly refused this type of reform declaring that France had already become egalitarian, thanks to the Revolution, and therefore had no need of an intrusive and predatory tax, more suited to the aristocratic and authoritarian societies which surrounded us. In reality, the inheritance archives demonstrate that the concentration of property and income was as extreme in the France of the period as in other European societies (and greater than in the United States).

Today we find the same hypocrisy when confronted with the glaring inequalities in our educational system. In France, in all good republican conscience, we choose to devote three times more public resources to the selective « grandes ecoles » than is spent on those university courses in which young people from socially underprivileged backgrounds are concentrated. Now this elitist and austerity tendency which has already led to a fall of 10% in expenditure per student between 2007 and 2017 (even though we all talk of the 'knowledge society', 'innovation', etc) may well get worse in the next five years, if we judge from some of the electoral programmes. France is also the country in which private primary and secondary schools are almost entirely financed by the taxpayers, while reserving the right to choose the pupils which suit them. This contributes to unacceptable levels of social segregation. There again the status quo is breezing ahead.

As far as the development of monetary inequalities is concerned, a new study carried out with Bertrand Garbinti and Jonathan Goupille-Lebret (on line on WID.world), clearly shows the limits of the French myth of egalitarianism. True, the rise in inequality has been less widespread than in the United States, where the share of the poorest 50% in the national income has literally collapsed. The fact remains that France has also experienced a sharp rise in inequality. Between 1983 and 2015, the average income of the richest 1% has risen by 100% (above inflation) and that of the 0.1% richest by 150%, as compared with barely 25% for the rest of the population (or less than 1% per annum).  The richest 1% alone has siphoned off 21% of total growth, as compared with 20% for the poorest 50%. The break with the 'Trente Glorieuses' or thirty year post-war boom is striking: between 1950 and 1983, incomes were rising steadily by almost 4% per annum for the immense majority of the population. On the contrary, it was the highest incomes which had to settle for a growth of barely 1% per annum. The fact that the post-war boom (Trente Glorieuses) is not over for everyone has not gone unnoticed: you only have to read the weekly magazines with the salaries of the executives and the ranking of fortunes to realise this.

The study also confirms the strong growth of the highest assets, 90% of which are held in financial portfolios, when above 10 million Euros, These have risen, not only much faster than GDP since the years 1980-1990, but also faster than the average assets (driven upwards by property assets). We find this prosperity in the number and amounts of assets declared year after year in the wealth tax. There is no problem of outflow here: on the contrary we see a very dynamic basis for fiscal purposes.

In these conditions, it is difficult to understand why some candidates think it opportune to abolish the wealth tax on financial assets, or to impose a lower tax on financial incomes than on income from employment. To promote mobility, it would be more judicious to lower the property tax (which is by far the principal tax on wealth: it generates 30 billion Euros as compared with 5 billion Euros for the wealth tax) for the households who have borrowed to buy property.

Some may consider this a kickback in return for the political financing observed. One can also see in these fiscal choices the effects of a sincere but false ideology, whereby subjecting people and territories to whole scale competition would spontaneously result in social harmony and prosperity for all. What is sure is that it is dangerous to address first and foremost those who have gained from globalisation and to invent a new French passion for the regressive tax, while the most vulnerable social groups have the impression they have been abandoned and are increasingly attracted by the sirens of xenophobia.  It is urgent to face up to the fact that inequality does exist in France.

--
John Case
Harpers Ferry, WV
The Winners and Losers Radio Show
7-9 AM Weekdays, The EPIC Radio Player Stream,
Sign UP HERE to get the Weekly Program Notes.
Check out Socialist Economics, the EPIC Radio website, and
The Poets and Mechanics Quaker Worship Group
Posted by The Red Caboose at 5:34 AM