George Boubouras was at his home in east Melbourne, taking in a cricket match, when his phone suddenly blew up.

It was late on July 13, about 10:45 p.m., and there was an urgency to the texts and calls that came flooding in. The euro had just crashed through parity against the dollar, a level once almost unthinkable, and everyone — clients, fund managers, traders — wanted to know what Boubouras, the head of research at K2 Asset Management, recommend they do. His response was simple: "Don't fight the dollar right now."

Just over an hour later, another jolt came. The Bank of Canada, struggling like the European Central Bank and other central banks to keep its currency steady against the dollar, delivered a full percentage-point increase in interest rates. Almost no one saw it coming. Ten hours later, another shock: the Monetary Authority of Singapore jumped into the foreign-exchange market, announcing a bid to push its currency back higher against the dollar.

At this point, Mitul Kotecha's phone began buzzing alerts non-stop, too. A Singapore-based strategist at TD Securities, Kotecha was vacationing with his wife at a resort in Thailand. It was their 25th anniversary and he was lounging on the beach and the whole scene seemed a little surreal to him. "It was all happening in a crazy short period," he says. "I couldn't believe the mayhem."

The dollar, the currency that powers global trade, is on a tear that has few parallels in modern history. Its ascent is the result primarily of the Federal Reserve's aggressive rate-hiking — it raised by another 75 basis points on Wednesday — and has left a trail of devastation: Driving up the cost of food imports and deepening poverty across much of the world; fueling a debt default and toppling a government in Sri Lanka; and heaping losses on stock and bond investors in financial capitals everywhere.

The greenback now stands at an all-time high, according to some gauges. It's up 15% against a basket of currencies since mid-2021. And with the Fed determined to keep driving rates up to quell inflation — even if it means sinking the US and global economies into recession — there's little that most long-time currency watchers see to brake the dollar's climb. 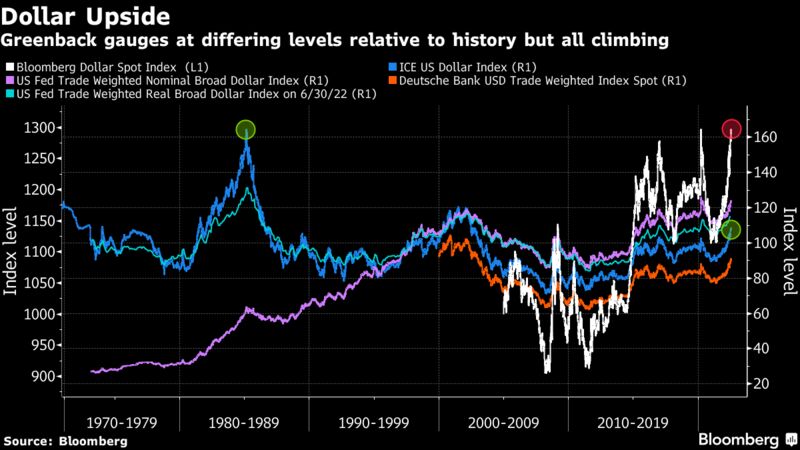 It's all a bit reminiscent of the Fed's Paul Volcker-led anti-inflation campaign in the early 1980s. Which is why chatter is growing about the possibility of a redux of the Plaza Accord, the agreement that international policy makers cut to artificially rein in the dollar back then. A similar deal may look like a long shot right now, but with some market metrics suggesting the dollar could easily climb the same amount again — gains that would convulse the global financial system and trigger all sorts of additional pain — it's likely only a matter of time before that talk heats up.

"There is no kryptonite to blow up the dollar's strength immediately, with the Eurozone hampered by the war in Ukraine and China's growth uncertain," said Vishnu Varathan, head of economics and strategy at Mizuho Bank Ltd. in Singapore. "There is simply no alternative to the dollar no matter where you look and it's pummeling everything else as a result — economies, other currencies, corporate earnings."

The US currency's rapid ascent is being felt in daily life around the world because it's the lubricant for global commerce — roughly 40% of the $28.5 trillion in annual global trade is priced in greenbacks. Its relentless rise risks creating a self-sustaining "doom loop."

Demand for the dollar has been hot for a simple reason: when global markets go crazy, investors look for a safe haven. And as the Bank for International Settlements put it, that security is "fulfilled now primarily by the US dollar." The size and strength of the US economy remains unparalleled, Treasuries are still one of the safest ways to store money and the dollar makes up the lion's share of foreign-exchange reserves.
US Treasury Secretary James Baker III speaks to reporters at New York's Plaza Hotel on Sept. 22, 1985, as five industrialized nations agreed on steps to strengthen key European currencies and the Japanese yen against the US dollar.
Photographer: Mario Cabrera/AP Photo

Some of the top dollar gauges reveal its capacity to rise further. While the Bloomberg Dollar Spot Index hit a record this month, it is only measured from the end of 2004. The narrower ICE US Dollar Index — its performance against developed peers — is still well below levels seen in the 1980s. It would take a 54% rally to get it back to its peak in 1985, the year of the Plaza Accord.

Surging Dollar Stirs Markets Buzz of a 1980s-Style Plaza Accord

Yet circumstances are different this time, said Brendan McKenna, strategist at Wells Fargo Securities in New York. The dollar's strength is not as pronounced — at least not yet —  and the Fed should cut rates at some point next year when the economy cools, easing pressure on the greenback. "Coordinated action to devalue the dollar and support G-10 currencies is probably not as much of a priority at this point,'' he said.

Even so, many of those big economies' currencies are suffering. In addition to the euro's slump, the Japanese yen has plunged to a 24-year low as investors flock to higher yields.

For many emerging markets the damage has been even worse. The Indian rupee, Chilean peso and Sri Lankan rupee have touched record lows this year, despite efforts by some central banks to try to slow the fall. Hong Kong's monetary authority has bought local dollars at a record pace to defend the city's currency peg, while Chile's central bank began a $25 billion intervention after the peso sank more than 20% in five weeks.

"It's not going to work," said Luca Paolini, strategist at Pictet Asset Management Ltd. that oversees $284 billion. "This rise in inflation, the dollar are generation-defining events and it's not something that central banks in emerging markets can do much about."

A strong US dollar is a blessing for Americans traveling to and shopping in Europe. Photographer: Cyril Marcilhacy/Bloomberg

A strong dollar boosts profits for oil producers and exporters of raw materials as well as international companies such as Toyota Motor Corp. that book a large chunk of their earnings in the US. It's also a blessing for American tourists such as 33-year old Fresno-based schoolteacher Mila Ivanova. "It helps having a stronger currency stretch my budget," said Ivanova in London before heading to Scotland and Ireland.

But a mighty greenback hammers almost everyone else.

Tech behemoths that repatriate part of their global earnings back to the US have taken a hit. Microsoft Corp. said the dollar was eating away at its profits, while International Business Machines Corp., which gave Microsoft its first big break back during the last major bout of inflation in the 1980s, blamed the strong dollar for perpetuating a cash-flow squeeze.

'Dollar Ate My Profit' Is Corporate America's Lament Once Again

For anyone looking to challenge the greenback's supremacy right now, Wall Street has a message: Don't bother. A survey of fund managers from Bank of America Corp. show bullish positions on the dollar have surged to their highest level in seven years.

"Only when investors are prepared to embrace high risk assets again do we expect the dollar to turn and this may not happen until the market is convinced that the Fed has changed course," said Jane Foley, head of FX strategy at Rabobank.

There have been bouts of dollar strength before, such as in 2016 or 2018 when the Fed sought to tighten policy, but with the latest data indicating US inflation is at a four-decade high, there's less wiggle room for the Fed. Indeed, Fed Chair Jerome Powell and Treasury Secretary Janet Yellen have barely remarked on the greenback's recent gains.

Against this landscape of soaring prices, a hawkish Fed and the risk of global recession, the dollar smiles. That's according to a widely-adopted idea coined by former Morgan Stanley currency guru Stephen Jen. The theory is that the currency rises at the two extremes — when the US economy is either in a deep slump or growing strongly — and weakens in the middle, during periods of moderate growth. 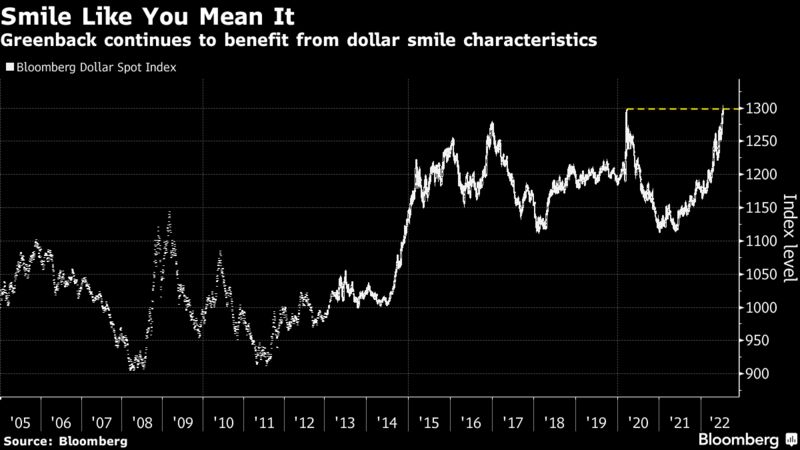 Boston-based Garrett Melson of Natixis Investment Managers thinks the greenback's grin this time may be a little darker.

"Macro forces this year have really seen the dollar smile revert back to the 2010's regime, which was more of a vicious cycle than a dollar smile," Melson, whose firm oversees over $1.3 trillion, wrote in a note. US growth is relatively more robust, leading to dollar demand, which pressures the global economy, triggering demand for dollars and US assets as a haven, "and around and around we go."

What could break the cycle? Investors from Singapore to New York are theorizing about catalysts such as a slowdown, clarity on when the Fed will stop hiking rates, or a material revival in China's economic growth. But it isn't clear when any of these will happen. The US consumer price index climbed to a new generational high of 9.1% in June, and the Fed hasn't hiked rates this quickly since the mid 1990s. Since then, the world economy has changed dramatically. For three decades, China's manufacturing ascent kept a lid on the prices of millions of manufactured products, even as raw material costs rose. As the Asian nation's supply of cheap labor and capital finally began to dry up, price pressures began to build again. Then came the trade war with the US, the pandemic and Putin's invasion of Ukraine, throwing a finely balanced global trade system into disarray and causing energy prices to soar. With the world's second-biggest economy still clinging to its Covid-zero policy, even at the cost of slower growth, a return to normal seems distant. 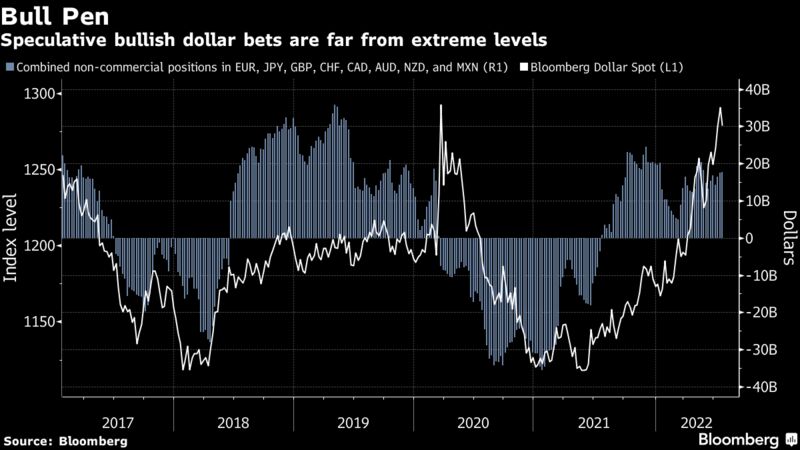 With so many uncertainties, central banks from Australia to Canada have little choice but to follow the US and raise borrowing costs to combat inflation. Expectations of fresh rate hikes are being revised higher by the week. And without more clarity on when the cycle may end, few investors anywhere are willing to bet against the greenback yet.

"Even if it's at a historic high, it still does not mean everyone is going to take off their position," said HSBC's Chew. "We don't think there is a turnaround at this point."
Posted by The Red Caboose at 6:43 AM