The soaring dollar is propelling the global economy deeper into a synchronized slowdown by driving up borrowing costs and stoking financial-market volatility -- and there’s little respite on the horizon.

A closely watched gauge of the greenback has risen 7% since January to a two-year high as the Federal Reserve embarks on an aggressive series of interest-rate increases to curb inflation and investors have bought dollars as a haven amid economic uncertainty. 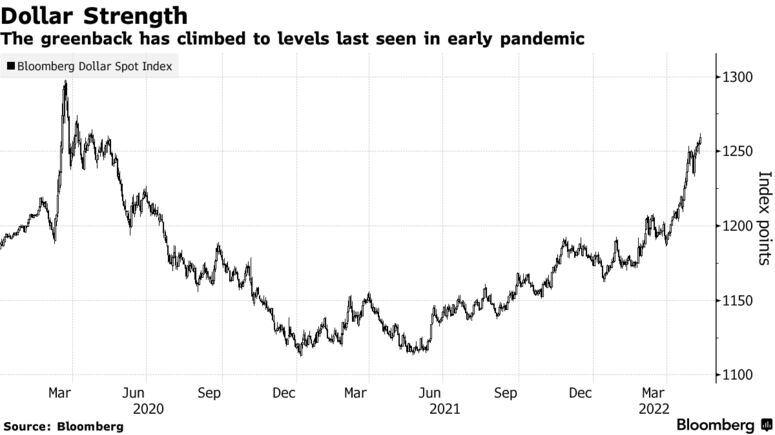 A rising currency should help the Fed cool prices and support American demand for goods from abroad, but it also threatens to drive up the import prices of foreign economies, further fueling their inflation rates, and sap them of capital.


That’s especially worrying for emerging economies, which are being forced to either allow their currencies to weaken, intervene to cushion their slide, or raise their own interest rates in a bid to buttress their foreign exchange levels.

Both India and Malaysia made surprise rate hikes this month. India also entered the market too to prop up its exchange rate.


Advanced economies haven’t been spared either: In the past week the euro hit a new five-year low, the Swiss franc weakened to hit parity with the dollar for first time since 2019 and Hong Kong’s Monetary Authority was forced to intervene to defend its currency peg. The yen also recently toughed a two-decade low.

“The Fed’s rapid pace of rate hikes is causing headaches for many other economies in the world, triggering portfolio outflows and currency weakness,” said Tuuli McCully, head of Asia-Pacific economics at Scotiabank.

While the combination of slowing US growth and an expected cooling in America’s inflation will ultimately see the dollar’s ascent slow -- which in turn will take pressure off other central banks to tighten -- it may take months to find that new equilibrium.

So far at least, traders are reluctant to call a peak in the dollar rally. That in part reflects bets at the end of 2021 that the greenback’s gains would fade as rate hikes were already priced in. Those views have since been shredded.

Developing economies are in danger of a “currency mismatch,” which occurs when governments, corporations or financial institutions have borrowed in US dollars and lent it out in their local currency, according to Clay Lowery, a former US Treasury assistant secretary for international affairs who’s now executive vice president at the Institute for International Finance.


Global growth will essentially flatline this year as Europe falls into recession, China slows sharply and US financial conditions tighten significantly, according to a new forecast from the IIF. Economists at Morgan Stanley expect growth this year to be less than half of the pace in 2021.

As rates continue to rise amid on-going global volatility -- from the war in Ukraine to China’s Covid lockdowns -- that has led investors to leap for safety. Economies nursing current account deficits are at risk of more volatility.


“The United States has always been a safe haven,” Lowery said. “With rising interest rates both from the Fed and from market rates, even more capital could flow into the US. And that could be damaging for emerging markets.”


Outflows of $4 billion were seen from emerging economy securities in April, according to the IIF. Emerging market currencies have tumbled and emerging-Asia bonds have suffered losses of 7% this year, more than the hit taken during the 2013 taper tantrum.

“Tighter US monetary policy will have large spillovers to the rest of the world,” said Rob Subbaraman, head of global markets research at Nomura Holdings Inc. “The real kicker is that most economies outside the US are starting in a weaker position than the US itself.”

Many manufacturers say the high costs they are facing means they aren’t getting much of a dividend from weaker currencies.

Toyota Motor Corp. forecast a 20% decline in operating profit for the current fiscal year despite posting robust annual car sales, citing an “unprecedented” rise in costs for logistics and raw materials. It said it doesn’t expect the weakened yen to deliver a “major” lift.

country’s financial markets. For now, it remains insulated from the wider dollar effect as low inflation at home allows authorities to focus on supporting growth.

But that’s causing yet another source of fragility for developing nations used to a strong yuan offering their markets an anchor.

“The recent abrupt shift in the renminbi’s trend has more to do with China’s deteriorating economic outlook than Fed policy,” said Alvin Tan, a strategist at Royal Bank of Canada in Singapore. “But it has definitely splintered the shield insulating Asian currencies from the rising dollar and precipitated the rapid weakening of Asian currencies as a group in the past month.”

In advanced economies, weakening currencies set up a “tricky policy dilemma” for the Bank of Japan, European Central Bank and the Bank of England, Dario Perkins, chief European economist at TS Lombard in London, wrote in a recent note.


ECB Governing Council Member Francois Villeroy de Galhau noted this month that a “euro that is too weak would go against our price stability objective.”

“While domestic ‘overheating’ is mostly a US phenomenon, weaker exchange rates add to imported price pressures, keeping inflation significantly above central banks’ 2% targets,” Perkins wrote. “Monetary tightening might alleviate this problem, but at the cost of further domestic economic pain.”

— With assistance by Maria Eloisa Capurro
Posted by The Red Caboose at 9:38 AM