Low-wage workers are also more likely to be found in occupations where they have contact with the public—think early care and education workers, home health aides, restaurant workers, and food processors. Workers shouldn't have to decide between staying home from work to care for themselves or their dependents and paying rent or putting food on the table. But that is the situation our policymakers have put workers in. Meaningful paid sick leave legislation is incredibly important for low-wage workers and their families and important to reduce the spread of illness. At the same time, access to paid sick days has positive benefits to employers as it reduces employee turnover with no impact on employment. 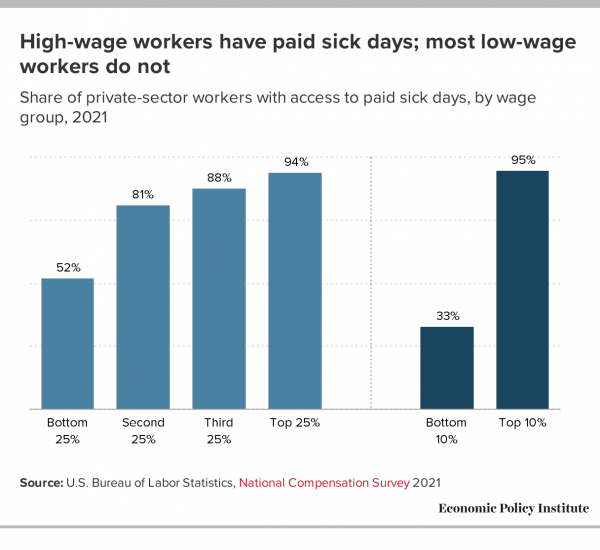 The ability for workers to earn paid sick days varies greatly across the country. In lieu of federal action, many states have passed legislation to guarantee paid sick days, but many workers have been left behind. Figure B shows vast differences across Census divisions in workers' ability to use paid sick time to take care of themselves or their family members. The share with access to paid sick days ranges from only 67% in East South Central states (composed of Alabama, Mississippi, Kentucky, and Tennessee) up to 95% in the Pacific states (California, Oregon, and Washington). Notably, many local municipalities in the East South Central region have been preempted by their state governments from passing paid leave and sick day policies. 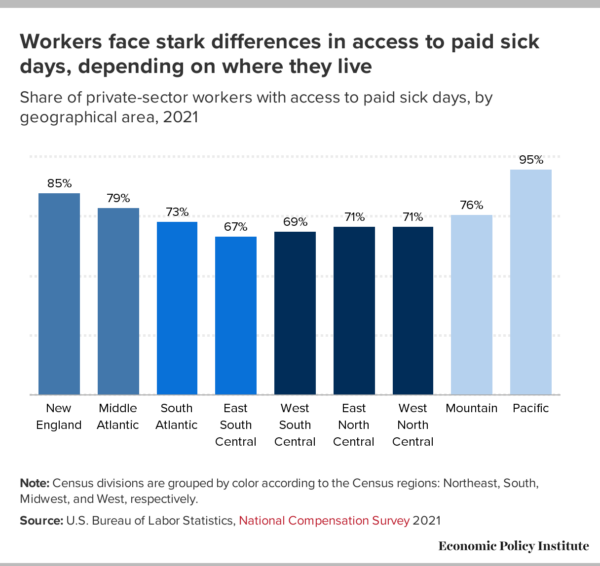 Policymakers can choose to act to eliminate the disparity in access to paid sick days. Federal legislators can require employers to give workers the opportunity to earn paid sick days to stay home to care for themselves or families members when they are sick, which will increase their economic security and reduce the spread of illness at work and at school, particularly important during an ongoing pandemic.

-- via my feedly newsfeed
Posted by The Red Caboose at 5:42 AM