Piketty minces some words, but he is a powerful advocate of internationalism.
Emerging from september 11
https://www.lemonde.fr/blog/piketty/2021/09/14/emerging-from-september-11/ 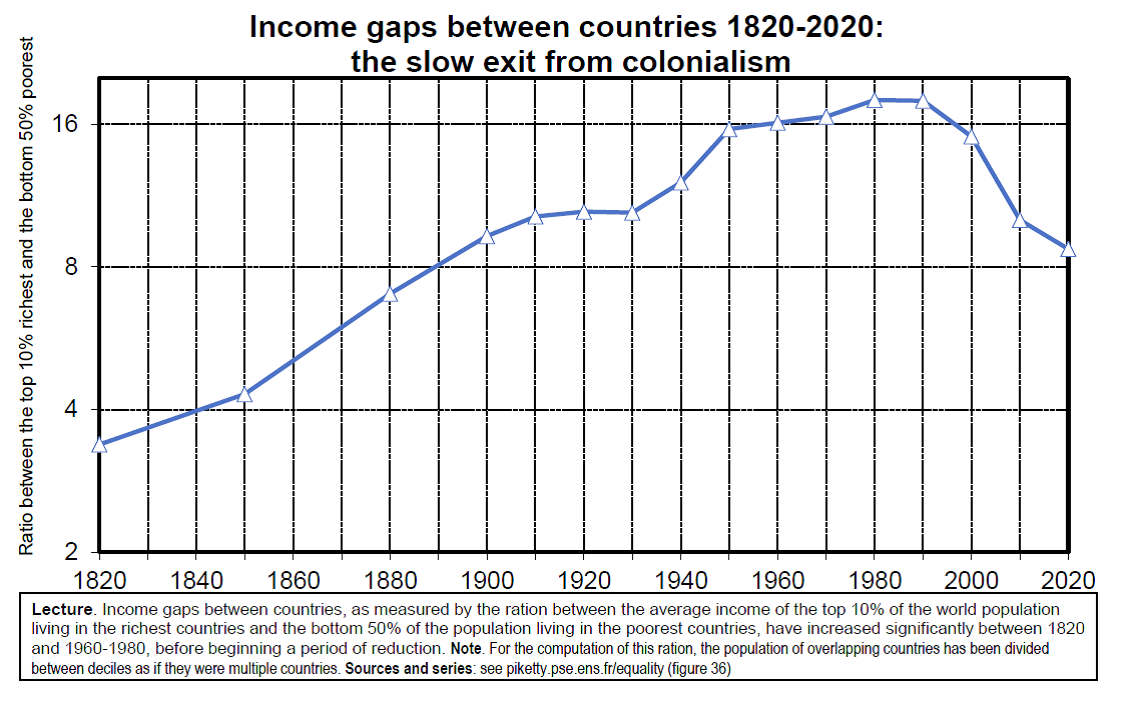 Twenty years ago, the World Trade Center towers were struck by aeroplanes. The worst attack in history was to lead the United States and some of its allies into a global war against terrorism and the 'axis of evil'. For the US neo-conservatives, the attack was proof of the theses put forward by Samuel Huntington in 1996: the « clash of civilisations » was becoming the new way of interpreting the world. This publication was their oft-quoted favorite, just as the works published by Milton Friedman in the 1960s and 1970s were those of the Reaganites in the 1980s.

Unfortunately, we now know that the US desire for revenge and the resulting brutalisation of entire regions and societies has only exacerbated identity-based conflicts. The invasion of Iraq in 2003, with its state-sponsored lies about weapons of mass destruction, only served to undermine the credibility of the 'democracies'. With the images of US soldiers holding prisoners on leashes at Abu Ghraib, there was no need for recruiting agents for the jihadists. The unrestrained use of force, the arrogance of the US Army and the enormous civilian losses among the Iraqi population (at least 100,000 deaths acknowledged) did the rest and contributed powerfully to the decomposition of the Iraqi-Syrian territory and to the rise of the Islamic State. The terrible failure in Afghanistan, with the return of the Taliban to power in August 2021, after twenty years of Western occupation, symbolically concludes this sad sequence.

To truly emerge from September 11, a new reading of the world is necessary: it is time to abandon the notion of a « war of civilisations » and replace it with that of co-development and global justice. This requires explicit and verifiable objectives of shared prosperity and the definition of a new economic model, sustainable and equitable, in which each region of the planet can find its place. Everyone now agrees that the military occupation of a country only strengthens the most radical and reactionary segments and can do no good. The risk is that the military-authoritarian vision will be replaced by a form of isolationist withdrawal and economic illusion: the free movement of goods and capital will be enough to spread wealth. This would be to forget the highly hierarchical nature of the global economic system and the fact that each country does not fight on equal terms.

From this point of view, a first opportunity was missed in 2021: the discussions on the reform of the taxation of multinationals essentially boiled down to revenue sharing between rich countries. However, it is urgent that all countries, in the North as well as in the South, receive a share of the revenues from the most prosperous global players (multinationals and billionaires), according to their population. Firstly, because every human being should have an equal minimum right to development, health and education, and secondly, because the prosperity of rich countries would not exist without poor countries. Western enrichment yesterday or Chinese enrichment today has always been based on the international division of labour and the unbridled exploitation of the world's human and natural resources. When refugees appear on the other side of the world, Westerners like to explain that it is up to the neighbouring countries to take care of them, however poor they may be. But when there is uranium or copper to be mined, Western companies are always there first, no matter how far away.

If we accept the principle of revenue sharing between all countries, then we obviously need to talk about the allocation criteria and the rules to be respected in order to be entitled to it. This would be an opportunity to define precise and demanding rules regarding respect for human rights, and in particular the rights of women and minorities, which would apply to the Taliban as well as to all countries wishing to benefit from the windfall. To prevent the money from being misused, the tracking of ill-gotten gains should also be generalised and there should be full transparency on excessive enrichment, whether in the public or private sector, in the South or in the North. The central point is that the criteria must be defined in a neutral and universal way and applied everywhere in the same way, in Afghanistan as in Saudi Arabia and the petro-monarchies, in Paris as in London or Monaco. Western countries must stop using the corruption argument at every turn to deny the South's right to self-governance and development, while at the same time pandering to the despots and oligarchs who benefit them. The time for unconditional free trade is over: further trade must depend on objective social and environmental indicators.

It is certainly understandable that Biden wants to turn the page on the war of civilisations as soon as possible. For the United States, the threat is no longer Islamist: it is Chinese and above all it is internal, with social and racial fractures threatening the country and its institutions with a new quasi-civil war. But the fact is that the Chinese challenge, like the domestic social challenge, can only be solved by transforming the economic model. If nothing is proposed in this sense, then it is increasingly towards Beijing and Moscow that the poor countries and the peripheral and forgotten regions of the planet will turn to finance their development and maintain order. The way out of 9/11 should not lead to a new form of isolationism, but instead to a new climate of internationalism and universalist sovereignty.

-- via my feedly newsfeed
Posted by The Red Caboose at 5:38 AM