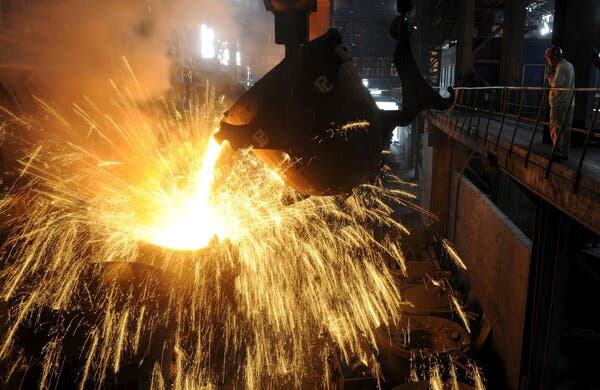 A steel plant in Hefei, China. In recent weeks expectations of a global economic rebound have pushed up the price of iron ore, a key ingredient, although futures slipped lower Thursday.Credit...Jianan Yu/Reuters

U.S. stocks were expected to fall when trading begins on Thursday as investors continue to worry about inflation. The S&P 500 was set to open 0.5 percent lower, futures indicated, which would extend losses for the U.S. benchmark index into a fourth day.

Concerns about rapid economic growth fueling inflation, as well as rising coronavirus cases in some parts of the world, have undermined recent optimism about the global economic recovery from the pandemic.

On Wednesday, minutes of the latest Federal Reserve policy meeting showed several officials thought that "at some point in upcoming meetings" they could begin to discuss tapering the bank's bond-buying program. Investors have speculated the central bank would have to do so as price increases accelerated. The same day, data showed Britain's annual inflation rate doubled to 1.5 percent in April.

The latest weekly data on new state unemployment benefit claims will be released on Thursday. Economists surveyed by Bloomberg expect 450,000 claims, which would be the third consecutive weekly drop and further evidence that the labor market is slowly recovering. Until April, claims regularly exceeded 700,000 each week.

European stock indexes were mixed on Thursday. The Stoxx Europe 600 rose 0.4 percent as gains in health care and industrial stocks outweighed a fall in energy company shares. The CAC 40 in France rose 0.5 percent and the DAX in Germany rose 0.4 percent. The FTSE 100 in Britain was little changed.
Cryptocurrencies


Bitcoin was trading just below $40,000 on Thursday morning after a volatile day on Wednesday when the price plunged to below $32,000.


Ethereum, another major cryptocurrency, also recovered some of its losses from Wednesday, when it fell about 20 percent.
Elsewhere in markets


Oatly, the oat-based milk substitute, priced its shares at $17 each for its initial public offering, the company said on Wednesday, valuing it at about $10 billion. Oatly is expected to begin trading on Thursday with the ticker symbol"OTLY."


Metal prices have fallen after reaching record highs on expectations of a strong global recovery that would increase demand for industrial materials. Iron ore futures were down more than 6 percent on Thursday and copper prices dropped nearly 4 percent on Wednesday.


In China, officials have warned against "unreasonable" increases in commodity prices, Bloomberg reported. Officials said they would increase the supply of commodities domestically in a bid to reduce prices, and bolster the oversight of trading in those markets.

The weekly figure was slightly under 455,000, a decline of 37,000 from the previous week and the lowest weekly total since before the pandemic. New claims for Pandemic Unemployment Assistance, a federally funded program for jobless freelancers, gig workers and others who do not ordinarily qualify for state benefits, totaled 95,000. The figures are not seasonally adjusted.

New state claims remain high by historical levels but are less than half the level recorded as recently as early January. The benefit filings, something of a proxy for layoffs, have receded as business return to fuller operations, particularly in hard-hit industries like leisure and hospitality.

More than 20 Republican-led states have said they will abandon federally funded emergency benefit programs in June or early July, saying the income is deterring recipients from seeking work as some employers complain of trouble filling jobs. Those programs include not only Pandemic Unemployment Assistance but also extended benefits for the long-term unemployed.


— Kevin McKenna
-- via my feedly newsfeed
Posted by The Red Caboose at 6:28 AM