Count on Tim Taylor to take you to the 12-step if you fell off the wagon trusting "spinned" stories about a major tech/weather event
The Great Texas Power Failure of February 2021
https://conversableeconomist.blogspot.com/2021/05/the-great-texas-power-failure-of.html

In the aftermath of the Texas power failures in February, a number commenters found confirmation that, amazingly, they had been right about everything all along. Thus, those who were against wind power and renewable energy mandated in general blamed the wind farms. Those who are suspicious of competition in markets for generating electrical power blamed deregulation, although blaming "the market" for what happens in a heavily regulated industry seems peculiar to me. Some critics even blamed Enron, a company that has not existed for years. What actually happened seems simpler, if less reinforcing for various preconceptions: It got really cold.

Michael Giberson provides an overview in "Texas Power Failures: What happened in February 2021 and What Can be Done" (Reason Foundation, April 2021). He describes the weather:

The temperature in Dallas dipped to -2° F, the coldest it had been in Dallas for 70 years. Snow fell on the beaches on the Gulf Coast at Galveston, south of Houston. Temperatures in Austin remained below freezing for six days at a time of when temperatures usually average in the mid-50s. At Brownsville, near the most southern tip of Texas, February weather typically averages 65° F. High temperatures in Brownsville were in the mid-80s just days before the cold. The temperature in the city did not rise above freezing for nearly 48 hours once the cold settled in. For the first time in history all 254 counties in Texas were under a winter storm warning at the same time. The cold was not unprecedented at any particular location, but it was extreme, widespread, and long lasting in February 2021. ...

The cold affected more than the ERCOT power system. Some power systems in Texas not within the ERCOT system also resorted to rolling outages. Natural gas production and distribution froze up. Municipal water mains froze in cities across the South. Ranchers in the Panhandle lost cattle to the cold. Citrus growers in South Texas saw damage to trees that may last for years. Roads were closed due to ice and storms. Failures were not solely an electric power industry concern or a natural gas failure. The cold was simply worse than almost anyone in Texas was prepared for. ... Clearly, it was not negligent on ERCOT's part—and maybe anyone's part—to fail to anticipate such anomalous temperatures.

The  Texas power emergency lasted about four days: at its worst, about 4.5 million people were without power.

Of course, the obvious question is why ERCOT--the ironically named Electric Reliability Council of Texas which has responsibility for regulating Texas electricity---had not already required larger investments against cold weather. After all, there had been a cold snap back in 2011 that also caused power outages, although it was not as extreme as the February 2011 version. The short answer is that the weather turned out to be colder than ERCOT's worst-case scenario. Here's a figure that takes a bit of explaining, but tells much of the story: 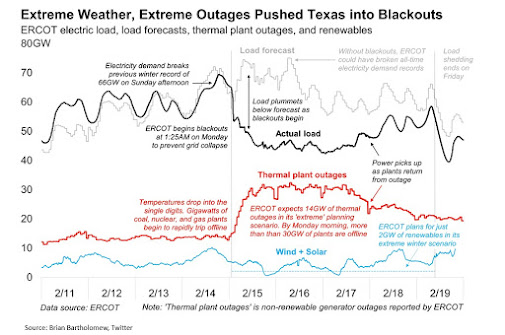 The black line shows the actual electricity load. The thin gray line shows the forecasted demand, if ERCOT had been able to deliver it. In general, electricity demand is typically  higher in Texas in the summer (air-conditioning) rather than the winter. But electricity demand during the cold snap would have broken the all-time summer records, as well as the winter ones.
But the real problem was on the supply side. The ERCOT "extreme" scenario was that 14 GW of electricity would go off-line; actually, 30 GW went off-line.  The blue dashed horizontal line bottom line shows the 2 GW that ERCOT projected for wind and solar power in its "extreme" scenario. There were a couple of small dips below this level, but a drop in wind power was not the main culprit here.
In retrospect, some of the problem was poor coordination across the energy system. For example, some natural gas pipeline operators failed to submit the information to their electricity providers so that they could be treated as "critical load" functions, which meant that they couldn't deliver natural gas to generate electricity:" "At its worst, as much as 9,000 MW of generation was sidelined by the lack of gas supplies, in part due to power cut offs at gas pipelines." The drop in electricity produced from natural gas was by far the biggest source of the overall drop in supply.
Other than better coordination of electricity supplies, what else might be done to avoid similar power failures in the future. The key point here to remember is that we are talking about preparation for a very rare event.
One option is to invest more in weatherization. Another is to pay some firms for being ready to provide a certain amount of electricity in an emergency, even if most of the time they are not actually doing so--that is, pay for some extra unused capacity. Another option is to build more connections from ERCOT to electricity grids outside of Texas, which could be very valuable in emergencies even if they aren't used much of the time. Yet another option would be to encourage Texas electricity users to maintain some of their own battery storage or generating capacity for emergencies.
Hindsight is 20:20, but now that Texas has been warned by experience, the case for some mixture of these actions is strong. Garrett Golding, Anil Kumar and Karel Mertens at the Dallas Federal Reserve offer some estimates in "Cost of Texas' 2021 Deep Freeze Justifies Weatherization" (Dallas Fed Economics blog, April 15, 2021). In measuring economic losses from the power outage, they write:

The power outages led to widespread damage to homes and businesses, foregone economic activity, contaminated water supplies and the loss of at least 111 lives. Early estimates indicate that the freeze and outage may cost the Texas economy $80 billion–$130 billion in direct and indirect economic loss. These initial calculations come with significant uncertainty. Estimates of insured losses, which are easier to quantify, range from $10 billion to $20 billion.

Winterizing standards on new oil and gas wells may offer a targeted and effective approach in the long run. Due to the high initial productivity of shale wells, new wells will eventually make up a large share of overall production. Many companies already implement winterizing measures. With winterizing equipment costing between $20,000 and $50,000 per well, we estimate these measures statewide would total $85 million–$200 million annually. A large and perhaps inexpensive fix would be prioritizing electricity delivery to gas infrastructure. If power plant and pipeline operators improve coordination to identify and constantly monitor the gas infrastructure requiring such prioritization, some of the problems experienced during the freeze could be prevented.

It's also possible to winterize the wind farms that received so much attention. They write about the possibilities of "upgraded blade coatings, cold-weather lubricants and de-icing drones."

Overall, the lesson here seems to be to move past the blame game, to accept that the cold weather snap was unprecedented, and now to have Texans pay a little more for electricity to fund these kinds of steps.

-- via my feedly newsfeed
Posted by The Red Caboose at 9:45 AM