It's too early to tell for sure, but, consulting my 'gut' -- remembering we KNOW how WRONG the 'gut' can be ---  tells me that the truce, and the signing of agreements to replace NAFTA, are retreats from Trump's bullying posture, since I do not see much change on the Chinese, Mexican, or Canadian stances all of Thumpers Thumping and Tweeting. More to come.....
Trump, Xi Agree to Temporary Truce in Bid to Contain Trade War
https://www.bloomberg.com/news/articles/2018-12-01/trump-opens-dinner-china-s-xi-with-truce-in-trade-war-at-stake

U.S. President Donald Trump and Chinese President Xi Jinping agreed to keep their trade war from escalating with a promise to halt the imposition of new tariffs for 90 days as the world's two largest economies negotiate a lasting agreement.

The truce between the U.S. and China emerged after a highly anticipated dinner Saturday between Trump and Xi on the sidelines of the Group of 20 summit in Argentina. The leaders agreed to pause the introduction of new tariffs and intensify their trade talks, Chinese Foreign Minister Wang Yi told reporters hours later in Buenos Aires.

"Both sides believe that the principled agreement reached between the two presidents has effectively prevented the further expansion of economic frictions between the two countries," he said.

The White House called the meeting "highly successful," saying the U.S. will leave existing tariffs on $200 billion of Chinese goods at 10 percent and refrain from raising that rate to 25 percent as planned on Jan. 1. In exchange, the U.S. wants an immediate start to talks on Trump's biggest complaints about Chinese trade practices: intellectual property theft, non-tariff barriers and forced technology transfer.

After 90 days, if there's no progress on structural reform, the U.S. will raise those tariffs to 25 percent, White House Press Secretary Sarah Huckabee Sanders said in a statement. China also agreed to boost its purchases of agricultural and industrial goods to reduce its trade imbalance with the U.S., she said.

"It's an incredible deal. It goes down, certainly -- if it happens, it goes down as one of the largest deals ever made," Trump told reporters aboard Air Force One as he returned from Argentina. "China right now has major trade barriers -- they're major tariffs -- and also major non-tariff barriers, which are brutal. China will be getting rid of many of them."

Investors have been eager for signs of a progress toward keeping an already costly trade dispute from spiraling into a new and broader cold war. White House economic adviser Larry Kudlow said that the meeting went "very well" in a brief comment to reporters as the Trump delegation left Buenos Aires for Washington.

"This is a strongly market positive result for the short term, since over the past few days markets have been nursing hopes that a tariffs pause of this kind would happen," Evercore ISI head of political analysis Terry Haines wrote in a note. "But it is not a ceasefire as some already are touting."

The outcome gives both sides enough to boast of a win without resolving the fundamental differences between them. China gets a delay on additional tariffs, while the U.S. gets greater purchases of agriculture goods while retaining leverage to push for more structural changes to the economy.

"Neither side got their maximum demands and it's not the first time in U.S.-China relations that both sides claim victory," said Michael Pillsbury, a senior fellow at the Hudson Institute and a defense official under presidents including Ronald Reagan and George W. Bush. "Both sides avoided the worst-case scenario."

The meeting ran longer than scheduled, ending after more than two hours. At the start of the dinner, Trump struck an optimistic note.

"My relationship is very special, the relationship that I have with President Xi," Trump said as the two men were seated.

Through a translator, Xi said that "only with cooperation between us can we serve the interest of global peace and prosperity and that is why I look forward to this meeting."

The meeting was the first face-to-face encounter between the leaders in more than a year, a period that saw Trump impose tariffs on billions of dollars in Chinese imports in a bid to force Beijing to halt trade practices the U.S. considers unfair. Trump had warned that a disappointing outcome could prompt more U.S. tariffs.

In other key results from the talks, the U.S. promised to uphold the one-China policy, Wang said, while China threw its support behind further meetings between Trump and North Korean leader Kim Jong Un.

The White House said that Xi would consider approving a possible $44 billion deal for Qualcomm Inc. to purchase NXP Semiconductors NV if it's brought to him again. It also said China agreed to designate the synthetic opioid fentanyl, which has been linked to an epidemic of overdose deaths, as a controlled substance -- a move that would expose its sellers to the maximum penalty under Chinese law. 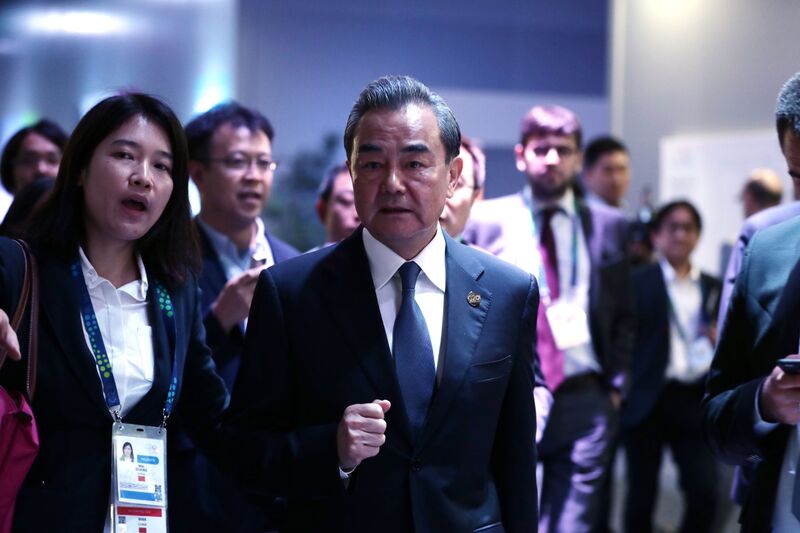 The dinner was moved up by about an hour after U.S. leader's schedule opened up on Saturday. He had already canceled a planned meeting with Russian President Vladimir Putin, and then scrapped an afternoon press conference out of respect for the family of former U.S. President George H.W. Bush, who died late Friday night.

Trump and Xi dined on some local specialties, including grilled sirloin with red onions, goat ricotta, and dates. For the first course, the attendees had a seasonal vegetable salad with a basil mayonnaise dressing, and for dessert, they were served caramel rolled pancakes with crispy chocolate and fresh cream, according to the White House.

-- via my feedly newsfeed
Posted by The Red Caboose at 4:52 AM