Brexit, Borders, and the Bank of England (Wonkish) [feedly]

This is a fascinating analysis by PK, demonstrating his deep understanding of trade issues (in addition to his
polemical skills) -- check out the nyt link (if you can get thru the paywall) for enhanced graphics.
Its also a kind of tutorial on trade economics, and the reasons behind the great difficulty advanced economies
are having coping.
Brexit, Borders, and the Bank of England (Wonkish)
Paul Krugman
https://www.nytimes.com/2018/11/30/opinion/brexit-borders-and-the-bank-of-england-wonkish.html

A few days ago the Bank of England released a report on the possible macroeconomic impact of Brexit. The most pessimistic scenarios were eye-poppingly bad — see Figure 1 — showing a worse slump than the one that followed the 2008 financial crisis. Not surprisingly, Brexit opponents seized on the report, while supporters accused the BoE of engaging in scare tactics.

I personally think Brexit is a mistake, but was puzzled by how big some of the numbers were; I tweeted about that, and the BoE reached out to me to offer some explanation of what was going on in their analysis. What I want to do here is, first, to recount my understanding of their logic; then offer my own views on what a reasonable Brexit projection might assume for both the short and the long run. 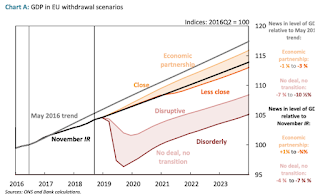 1. Brexit according to the BoE

First things first: the people I spoke to at the BoE were adamant that they were not trying to scare people, push them into accepting Theresa May's deal, or anything like that. By their account, this report was about financial stability, assessing the robustness of the banks in the face of possible shocks. The very negative scenarios that caught everyone's attention weren't projections, but rather an attempt to game out the consequences if the worst happened.

But where did these negative scenarios come from?

When economists try to assess changes in trade policy, they normally use some kind of "computable general equilibrium" (CGE) model. These models attempt to take account of the impacts of trade policy on consumption, production, and the allocation of resources. And there has been quite a lot of CGE modeling of Brexit.

This modeling is tricky because Brexit isn't about tariffs, which we know how to represent; it's about invisible barriers to trade arising from the end of open border to goods movements and so on. Still, plausible assumptions give us some sense of the magnitudes. My own rough estimate was 2% of GDP in perpetuity; other estimates run higher, but generally in the 3-4% range.

But the BoE's worst-case scenario shows a cost exceeding 10% of GDP, around three times what a CGE would tell you. Where's that coming from?

Part of the answer is that the BoE includes some nonstandard effects of trade: they assume that reduced trade (and foreign direct investment) will reduce productivity more than the direct impacts on resource allocation would predict. They cite some statistical evidence, but it's important to realize that this is black-box, reduced-form stuff: there's no explicit mechanism through which it's supposed to happen.

However, these assumed nonstandard effects aren't what's driving the really bad scenarios; they only, as I understand it, contribute something like 1 percentage point of GDP to the predicted costs.  What's key to the very bad results is, instead, the disruption that might come with a hard Brexit. Right now, goods flow into and out of Britain with minimal frictions. After Brexit, there would have to be customs inspections, and the UK doesn't have remotely enough customs infrastructure to do the job. The result would be huge delays at Dover and other ports, with queues of trucks backing up for many miles on motorways, just-in-time production massively disrupted, and more.

That disruption is what's driving the terrible scenarios. Notice that this analysis says that the costs of leaving the EU are much higher than the GDP that would have been foregone if Britain had never entered the EU, and therefore had the customs infrastructure to deal with trade flows in place.

OK, that's what I understand about the BoE analysis. What do I think about it?

2. Would it really be that bad?

So, about the BoE's purpose in issuing this report: if it wasn't intended to scare people, the Bank was extraordinarily naïve in not realizing how it would be reported and read. They really led with their chin here.

On the substance: I'm skeptical about the supposed effects of trade on productivity. I know that there's some evidence for such effects; trade seems to favor more productive firms. But relying a lot on effects we can't model seems dubious.

In particular, I have strong memories of the openness-growth debacle of the 1990s. At the time, there were many statistical studies purporting to find that open, outward oriented developing countries had much higher growth rates than inward-looking economies. This was interpreted to mean that countries that had tried to industrialize by protecting domestic markets could achieve Asian-type growth rates if they liberalized trade.

As it turned out, the supposed statistical evidence on openness and growth was quite suspect. And when massive trade liberalization happened in places like Mexico, the hoped-for growth miracles didn't materialize.  So I would treat that channel of Brexit losses as questionable. But what I learned from the BoE is that it's not that central to the analysis.

What about disruption at the borders? This could indeed be a huge problem.

What's puzzling about the scenarios shown in Figure 1 is that they show these disruptions going on for multiple years, with barely any abatement. Really? Britain is an advanced country with high administrative capacity — the kind of country that history shows can cope well with huge natural disasters, and even wars. Would it really have that much trouble hiring customs inspectors and installing computers to recover from an 8 or 10 percent drop in GDP?

And even in the short run, I wonder why Britain couldn't follow the old prescription, "When all else fails, lower your standards." If laxer enforcement, special treatment for trusted shippers, whatever, could clear the bottlenecks at the ports, wouldn't that be worth it, despite the potential for fraud, as a temporary measure?

That said, it's truly amazing that Britain finds itself in this position. If the downsides are anywhere close to what the BoE asserts, given the risk — which we've known for a long time was substantial — of a hard Brexit, it was an act of utter folly not to have put in backup capacity at the borders. We can't possibly be talking about all that much money, and the Brexit vote was more than two years ago. What has the UK government been doing?

All in all, it's quite a spectacle. Whether you're pro-Brexit or anti, you should be horrified and outraged at how the issue has been handled.

Paul Krugman has been an Opinion columnist since 2000 and is also a Distinguished Professor at the City University of New York Graduate Center. He won the 2008 Nobel Memorial Prize in Economic Sciences for his work on international trade and economic geography. @PaulKrugman

-- via my feedly newsfeed
Posted by The Red Caboose at 6:29 AM