Failing to Address the Status Quo will Drive Racial Wealth Divide for Centuries.. 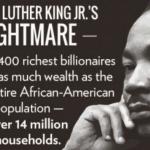 Racial and economic inequality are the most pressing social issues of our time. In the last decade, we have seen the catastrophic economic impact of the Great Recession and an ensuing recovery that has bypassed millions of Americans, especially households of color. This period of economic turmoil has been punctuated by civil unrest throughout the country in the wake of a series of high-profile African-American deaths at the hands of police. These senseless and violent events have not only given rise to the Black Lives Matter movement, they have also sharpened the nation's focus on the inequities and structural barriers facing households of color.

However, even when these economic inequities do get attention, the focus is often on a single facet of the issue: income. The new report Ever-Growing Gap [1], published by the Institute for Policy Studies and the Corporation for Enterprise Development, focuses instead on a related but distinct facet of the issue: the essential role that wealth plays in achieving financial security and opportunity. It examines our country's growing racial wealth divide and the trajectory of that divide. 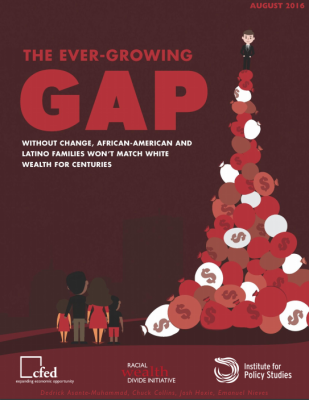 Report authors: Chuck Collins, Dedrick Asante-Muhammed, Josh Hoxie and Emanuel Nieves
This growing wealth divide is no accident. It is the result of public policy designed to widen the economic chasm between white households and households of color and between the wealthy and everyone else. In the absence of significant reforms, the racial wealth divide—and overall wealth inequality—are on track to become even wider in the future.
How far behind is the wealth of black families compared to white families? 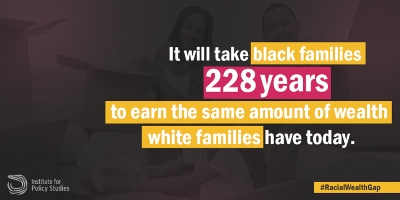 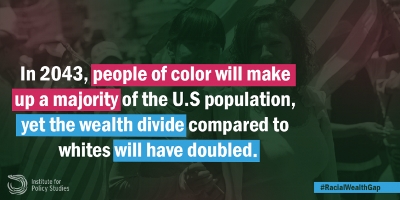 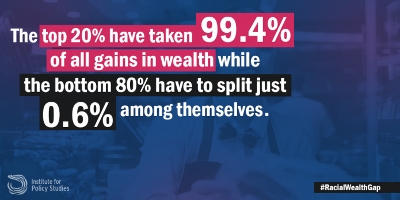 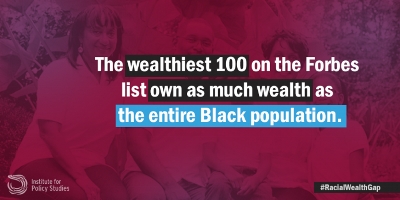