Too many people got left out as usual.  Prices rose as wages rose.

I will not be surprised if this is the true and principle Clinton structural economic strategy to address inequality: turn more places into Silicon Valleys. It's the strategy, or opportunity, that Bill Clinton exploited in the mid nineties that propelled the tech boom, and the only instance (97-98) in 40 years where there was a significant bump in median family income (and wages or salaries).

I certainly agree that such a strategy can be an important component. But I think its the WRONG focus to put at the TOP of the to-do list. MInimum wage, major infrastructure spending, collective bargaining expansion, big payoffs in the form of cash, new jobs and/or training for displaced workers from globalization and climate change adjustment impacts --- all these things are on top of revisiting the 90s tech boom on MY to-do LIST. 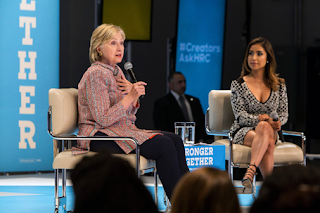 Hillary Clinton's technology policy initiative, released on Tuesday, is a list maker's dream, a parade of specific proposals covering a spectrum of issues. But its overriding theme is that technology should be an engine of equality rather than elitism.

The goal, the summary document declares, is "to create the jobs of the future on Main Street."

Mrs. Clinton's agenda includes having the federal government step in to help fill a finance gap, as banks have cut their loans to small businesses and venture capital funding is concentrated in a few regions, led by Silicon Valley.

Her plan calls for "supporting incubators, accelerators, mentoring and training for 50,000 entrepreneurs in underserved areas," and increasing funding for several existing programs that offer tax credits and financing for community development and small businesses.

"This is a pragmatic plan that could help leverage what happens in Silicon Valley so that there's innovation and job growth throughout the country," said Karen Kornbluh, former United States ambassador to the Organization for Economic Cooperation and Development, who is an adviser to the Clinton campaign.

The Clinton program also links start-ups with the student loan crisis. Under her plan, young entrepreneurs could defer payments on their federal student loans for up to three years. The relief might also apply to the early employees of start-ups, like the first 10 or 20 workers, according to the plan.

The deferred payment plan, the campaign document states, could mean that "millions of young Americans" would not have to pay interest or principal on their loans "as they work through the critical start-up phase of new enterprises."

It is clearly a nod to young voters, who overwhelmingly supported Bernie Sanders in the primaries.

The Clinton plan offers a liberal immigration initiative that has long been a favorite of technology executives and venture capitalists: automatically issuing permanent resident status to people who earn graduate degrees in science, engineering and mathematics from accredited universities.

Skeptics questioned spending to "double down" on programs that have not yet proved effective.

"No one seems to be evaluating these programs," said Thomas Lenard, president of the Technology Policy Institute, a nonprofit research foundation.

Jeffrey Eisenach, a visiting scholar at the American Enterprise Institute, a right-leaning policy research group, said, "This isn't a technology plan, it's a government spending plan."

But other technology policy experts were impressed by the Clinton campaign document as a whole.

"She's got a technology and innovation agenda, and this suggests it would be a strong focus in a Clinton presidency," said Robert Atkinson, president of the Information Technology and Innovation Foundation, a nonprofit policy research group. "That in itself is a message."

The Winners and Losers Radio Show

Sign UP HERE to get the Weekly Program Notes.