We haven't seen numbers like this since the financial crisis — although to be fair, these numbers bring us in the USA back to where we were on Monday, prior to the rally this past week; Europe seems to be getting punished to a much greater degree.

A few interesting charts worth sharing:

What Issues Mattered Most to Voters Or the votes presented as a table: Markets Around the World Fall between 4-15% 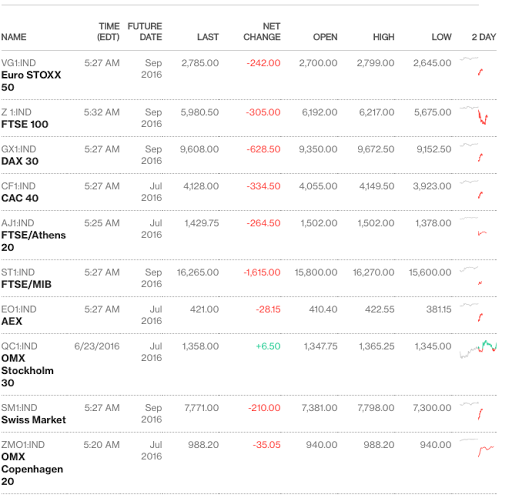 Despite the Selloff, Brexit' Is No Lehman But Currency Markets Have a 10-Sigma Movements Polls forecast close race, but got it wrong British Pound back to levels not seen since 1985 The "Leave" Camp Trusts No One UK has benefited from the EU Membership Younger Generation feels Old Folks Stuck it to them

Its not just the Brits: Most of Europe does not like the EU Does Scotland now try to leave the UK and rejoin the EU? How Bad is this for Business in UK? Although there are still many ties between UK and EU The post Brexit Meltdown (now with charts!) appeared first on The Big Picture.

-- via my feedly newsfeed
Posted by The Red Caboose at 4:55 AM