The current economic crisis has hit workers hard.  Unemployment rates remain high, with total weekly initial claims for unemployment insurance benefits continuing to grow.  Recent reports of a sharp rise in median earnings for full-time workers appear to complicate the picture.  However, a more detailed examination of worker earnings and employment not only helps to sharpen our understanding of the devastating nature of the current crisis for working people, but makes clear that low wage workers are the hardest hit.

Recent data show that median usual weekly earnings of full-time workers have grown 10.4 percent over the four quarters preceding the second quarter of 2020. This is a 6.4 percentage point acceleration compared with the fourth quarter of 2019. The median usual weekly earnings measure that we focus on here is not an exception. Other measures of wage growth—like average hourly earnings and compensation per hour—show similar spikes.

The spike can be seen in the movement in the blue line in the figure below (which is taken from the Economic Letter).  As we can see, nominal average weekly earnings for full-time employees grew by 10.4 percent between spring of 2019 and spring of 2020, the fastest rate of growth in nearly 40 years.

While this earnings trend suggests a strong labor market, it is, as the researchers correctly note, highly misleading.  The reason is that this measure has been distorted by the massive loss of jobs disproportionally suffered by low wage full-time workers.  The decline in the number of full-time low wage workers has been large enough to change the earnings distribution, leading to a steadily growing value for the median earnings of the remaining full-time workers.

In other words, the spike in median earnings is not the result of currently employed workers enjoying significant wage gains.  This becomes clear when we adjust for the decline in employment by only considering the nominal median earnings of those workers that remained employed full-time throughout the past year.  As the downward movement in the green line in the above figure shows, the gains in medium earnings for those continuously employed has been small and falling.

The researchers confirmed that it was low-wage workers that have disproportionately suffered job losses by calculating the earnings distribution of the full-time workers forced to exit to, in the words of the researchers, "nonemployment" – by which they mean either unemployment or nonparticipation — each month over the past two decades.

They began by estimating the yearly share of full-time worker exits to unemployment and nonparticipation.  As we see in the figure above, in non-recession years, about 7 percent of those with full-time jobs become nonemployed each year—2 percent become unemployed and 5 percent leave the labor force.  During the Great Recession, nonemployment peaked in August 2009 at 11 percent, with most of the increase driven by a sharp rise in unemployment (as shown by the big bump in green area).  There was little change in the rate at which full-time workers dropped out of the labor force.

The severity of our current crisis is captured by the dramatic rise in the share of workers exiting full-time employment beginning in March 2020.  Exits to nonemployment peaked in May 2020 at 17 percent, with 9 percent moving to unemployment and 8 percent to nonparticipation. Not only is this almost twice as high as during the Great Recession, the extremely challenging state of the labor market is underscored by the fact that the share of nonemployed who chose nonparticipation and thus exit from the labor market was almost as great as the share who remained part of the labor force and classified as unemployed.

The next figure shows the share of workers exiting to nonemployment by their position in the wage distribution. The three areas depict exits by workers in the lowest quarter of the earnings distribution, the second lowest quarter, and the top half, respectively. 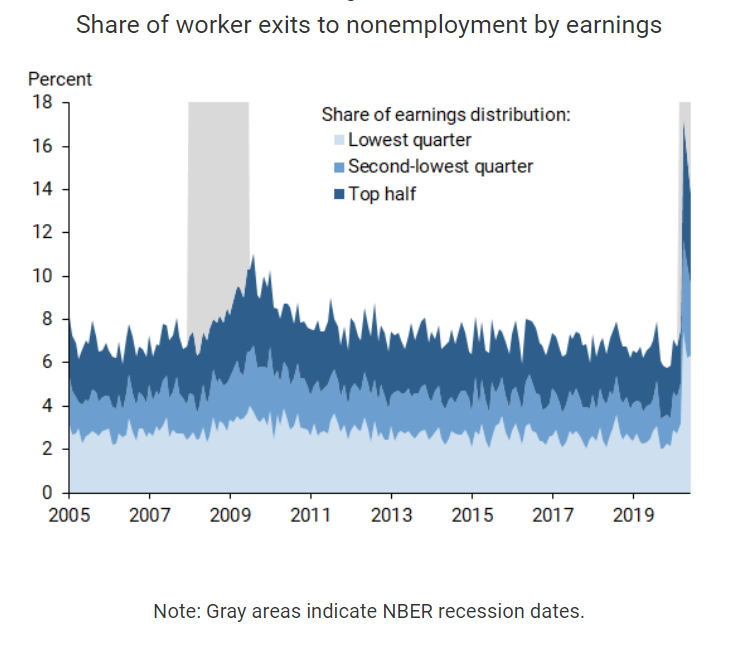 As the researchers explain,

Therefore, the recent spike in aggregate nominal wage growth does not reflect the benefits of pay raises and a strong labor market for workers. Instead, it is the result of the high levels of job loss among low-income workers since the start of the pandemic.

Tragically, low wage workers have not only suffered disproportional job losses during this pandemic. Those who remain employed are increasingly being victimized by wage theft.  As Igor Derysh, writing in Salon, notes: "A paper released this week by the . . . Washington Center for Equitable Growth found that minimum wage violations have roughly doubled compared to the period before the pandemic."

These are indeed hard times for almost all working people but, perhaps not surprisingly, those at the bottom of the wage distribution are suffering the most.

-- via my feedly newsfeed
Posted by The Red Caboose at 1:08 PM