The bad economic news has been coming thick and fast, from record drops in activity to record surges in jobless claims, and unsurprisingly it's set to continue next week.

The International Monetary Fund updates its global forecasts to coincide with its spring meeting, which will now take place via video conference for the first time because of the coronavirus.

Huge downgrades are expected, echoing the multiple dire predictions from economists, institutions and central banks already. In a gloomy preview, Managing Director Kristalina Georgieva said Thursday the world is looking at the worst economic fallout since the Great Depression.

Here are some of the charts that appeared on Bloomberg this week, offering a snapshot of the immense damage being done to activity, jobs and government finances because of the measures needed to contain the virus.

The coronavirus outbreak is set to rob the global economy of more than $5 trillion of growth over the next two years, according to JPMorgan Chase economists. That's almost 8% of gross domestic product, or greater than the annual output of Japan. 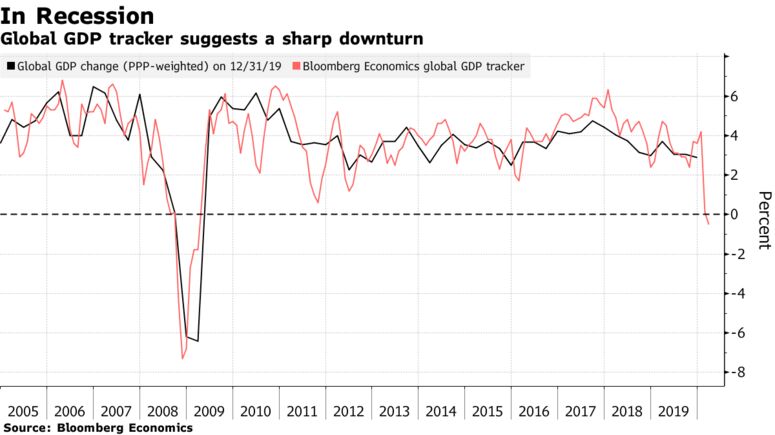 The global economy is already shrinking, and losing steam faster than in the early days of the financial crisis: That's the main takeaway from Bloomberg Economics' new global GDP tracker. The reading for March shows a 0.5% contraction on an annualized basis, compared 0.1% in February. With lockdowns deepening over the past month and set to stay in place in April, the March reading is unlikely to be the worst of the downturn.

The ILO fears 38% of the world's workers are at risk of layoffs, pay cuts

The pandemic is having a "deep, far-reaching and unprecedented" impact on employment, with more than 1 billion workers at high risk of a pay cut or losing their job, according to the International Labor Organization. With factories, schools and shops shuttered around the world, the ILO says lockdowns are affecting almost 2.7 billion workers. Within that, almost half -- representing about 38% of the global workforce -- are extremely vulnerable, mainly in the hotel, food service, manufacturing and retail industries.

The World Trade Organization says there may be a deeper collapse of international trade flows than at any point in the postwar era. The WTO presented two possible scenarios for global trade in the years to come in a report published Wednesday, noting that the unprecedented nature of the health crisis could result in a wide range of outcomes. In an optimistic scenario, the WTO forecasts merchandise trade may fall 13% in 2020 and rebound 21% in 2021, while in a pessimistic case volumes could drop by as much as 32% before increasing 24% next year.

Major central banks have been forced to take extreme steps to support growth and underpin financial stability. Across the Group of Seven, that's included the return, or launch, of large-scale asset purchases. Net asset purchases for G-7 central banks were close to $1.4 trillion in March. That's an extraordinary total, close to five times higher than the previous peak of $270 billion in April 2009, according to Bloomberg Economics.

Leaders around the global are unveiling ever-bigger spending packages to help companies and workers. In the European Union, finance ministers managed to paper over differences this week to agree a 540 billion-euro package. Russia was proving an outlier, with the Kremlin hoarding hundreds of billions of dollars in reserves. ING Bank estimates President Vladimir Putin's support measures so far amount to only about 2% of GDP. That is set to change: The government will roll out about 1 trillion rubles ($13.5 billion) of new spending, according to people familiar with the plans.

Europe imposed tough clampdowns on movement in response to virus

Countries have implemented social distancing measures and shutdowns at varying speeds and intensity. While some governments have spoken about gradually easing tough restrictions, any return to what might be recognized as "business as usual" is unlikely to happen very soon. 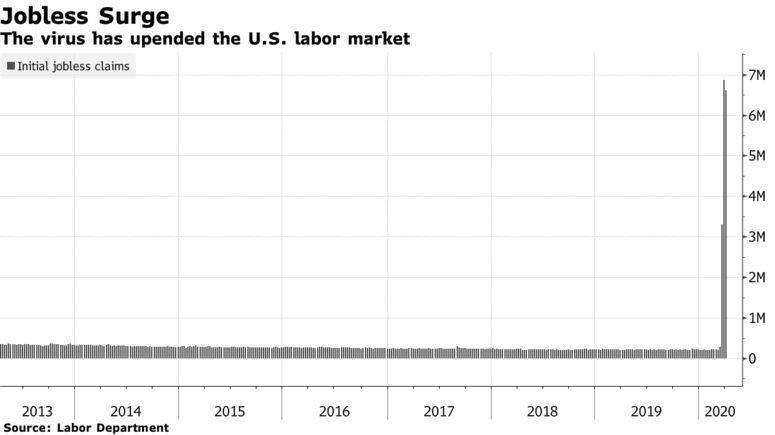 With huge swathes of economies shut down, workers have been laid off, lost hours or been furloughed. In the U.S., the impact on the labor market can be clearly, and depressingly, seen in initial jobless claims, with the weekly total hitting more than 6.6 million. The average over the past five years -- before the virus-related surge -- is less than 250,000.

-- via my feedly newsfeed
Posted by The Red Caboose at 7:46 AM