by Rich Miller and Michelle Jamrisko

You think: US and China? No. Manufacturing/tech vs Services? yes. Oh. Wait a minute. That IS China vs US! eek

Getting companies to resume operations and factories to reopen is one thing. Persuading consumers to brave catching the coronavirus and go out to shop, eat, travel or watch sports is another.

"Nothing about reopening the economy will be easy, but restarting businesses will be more straightforward than restarting aggregate demand," Moody's Analytics Chief Economist Mark Zandi said.

The result: An uneven reboot for the global economy, with manufacturing and the nations dependent on it bouncing back fairly quickly, while more communal service-sector activities and countries lag.

That will keep pressure on governments and central banks to continue their support as their economies claw their way back from the deepest worldwide downturn since the Great Depression.

The IMF is predicting a 2020 global contraction of 3%

Policy makers from the Bank of Japan, the Federal Reserve and European Central Bank all meet this week, with investors on the lookout for any further steps they might take to aid their battered economies.

Some nations' recoveries "are a little more V-shaped because there's a little bit more manufacturing, a little more tech," Catherine Mann, Citigroup Inc. chief economist and former chief economist for the Organization for Economic Cooperation and Development, told Bloomberg Television April 23. "That might be a South Korea or Taiwan. And then there are other economies that are extremely tourism dependent. Those are facing L's. Something like a Thailand, a Singapore."

The U.S. revival is likely to be gradual, as some states reopen for business sooner than others, Deutsche Bank Securities economists said in an April 24 report. By the end of the year, the U.S. will have recovered only about 40% of the output and employment it lost during the crisis.

This has ramifications for the November election. If consumers hold back and the economy fails to meaningfully recover, that would put President Donald Trump's chances for winning re-election at risk.

Trump on Friday hailed the coming restart. "There is a tremendous pent up demand. We will open big!" he declared in a tweet. 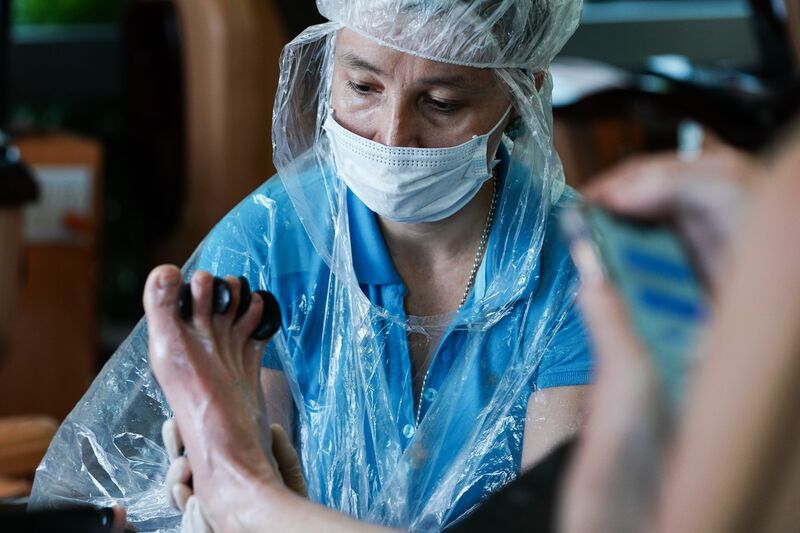 A worker gives a customer a pedicure at a nail salon in Atlanta, Georgia, on Friday, April 24, 2020.

Some businesses will enjoy a one-time boost as stay-at-home orders are eased. Think barber shops and hair salons. And there's always a chance that stir-crazy consumers worldwide could surprise economists by flocking back to the shops.

Singapore serves as a warning in that regard. It's gone from being seen as a global standard bearer for taming the deadly virus to the home of Southeast Asia's largest recorded outbreak.

"The one way not to reopen the economy is to have a rebound that we can't take care of," Anthony Fauci, the top infectious-disease expert on the White House coronavirus task force, said about the risk of a resurgence.

It's not just a fear of being infected that could keep consumers out of the malls. Anxiety over job loss and shrinking savings also could prompt them to husband their resources and cut back on spending, economists say.

The lopsided economic revival is playing out in China, home of the initial coronavirus outbreak.

China's Economy Comes to a Stop

An historic collapse in Chinese growth

"There has been policy-directed resumption of factories on the supply side, but the picture for a demand recovery is more mixed." said Selena Ling, head of treasury research and strategy at Oversea-Chinese Banking Corp. "There is talk about pent-up Chinese demand for some high-end luxury goods," she added. "But general demand at the man of the street level is more subdued."

Chinese industrial production in March was down about 1% from a year earlier, while retail sales were off almost 16%, according to calculations by Bank of America Corp. economists.

Marriott International Inc. Chief Executive Officer Arne Sorenson told Bloomberg Television on April 20 that occupancy at the company's roughly 350 hotels in mainland China has risen to about 25% from 6% to 8% in the first week of February.

"It's still down massively from where what it should be," he added, noting that the normal rate is around 70% to 80%.

In Germany, the powerful automobile industry worries that buyers will be scarce as the country reopens for business. It's pushing for a "cash for clunkers" program to spur sales after the crisis.

Measures that could strengthen demand "in times of strong insecurity among customers" would be "worth considering," Daimler AG said in a statement.

U.S businesses also are bracing for a long slog as the world's largest economy begins to reopen.

"Given the combined effects of the pandemic and associated financial impact on the global economy, we believe that it could be up to three years before we see a sustainable recovery," Delta Air Lines Inc. CEO Ed Bastian told analysts on April 22.

With Americans over 65 years old accounting for 20% of consumer spending, demand could be constrained for a while given this group's heightened vulnerability to the virus, according to Deutsche Bank Securities Chief Economist Torsten Slok.

"With all this clamoring for economic liberation, we'll get workers back on the job," he said, referring to Trump's call for selected states to reopen their economies. But fear of a fresh virus outbreak will "hold back consumer demand to unprecedentedly low levels."

"Supply without demand doesn't work," the former Morgan Stanley executive added. "We're going to be operating at low levels of economic activity for the foreseeable future."