The Recession Bread Lines Are Forming in Mar-a-Lago's Shadow
https://www.bloomberg.com/news/articles/2020-04-04/the-recession-bread-lines-are-forming-in-mar-a-lago-s-shadow

Though it's just a four-minute drive across the lagoon from Mar-a-Lago, President Donald Trump's private club, and ten minutes from the Palm Beach outposts of Chanel and Louis Vuitton, Howley's diner has become an emblem of America's stark new economic reality.

With more than 10 million people across the nation suddenly unemployed, bread lines are forming in the shadows of privileged enclaves like this one in Florida.

For the past two weeks, the kitchen staff at Howley's has been cooking up free meals—the other day it was smoked barbecue chicken with rice and beans, and salad—for thousands of laid off workers from Palm Beach's shuttered restaurants and resorts. The rows of brown-bag lunches and dinners are an early warning that the country's income gap is about to be wrenched wider as a result of the Covid-19 crisis, and the deep recession it has brought with it.

Even as much of America is fretting about supermarket shelves depleted of their favorite cereal brands and toilet paper or the logistics of curbside pickup from favorite restaurants, a brutal new hunger crisis is emerging among laid-off workers that has begun to overwhelm the infrastructure that normally takes care of the needy.

More than 1 in 8 people in over half of U.S. counties don't have adequate food

"We're seeing about a 650% increase in our request for support," said Sari Vatske, executive vice president of Feeding South Florida, which before the pandemic was already serving more than 700,000 people a year in four counties including Palm Beach County. "The growth is exponential."

The surge in demand is not just in Palm Beach. Food banks around the world have recorded increases in requests for assistance as government-ordered lockdowns have started to bite, prompting employers to lay off staff.

Food insecurity was already a chronic problem in many U.S. communities. Across the U.S. 14.3 million households were short of food in 2018, the last year for which government data are available. That equates to just over one in ten American households. For Black and Hispanic households the rate is closer to one in five.

That is likely only to get worse with the number of people losing jobs at historic levels. In the final two weeks of March alone an unprecedented 10 million workers applied for unemployment insurance. And some economists predict about 20 million people will have lost their jobs by July.

Those being thrown out of work are often people who were living paycheck-to-paycheck beforehand and are therefore among the most vulnerable.

The $2 trillion rescue package Congress passed on March 27 includes $1,200 emergency payments for most Americans and extended unemployment benefits. But the speed in which the aid finds its way to the segments of the population that need it the most will have consequences for how long and deep the recession that's already underway is.

"It's just really hitting people who are already the most vulnerable workers in our society so that is going to mean the pain will propagate faster," said Heidi Shierholz, a former Labor Department chief economist now at the Economic Policy Institute. "They're more likely to be living paycheck to paycheck than anyone else, and so if their income falls, they're more likely to actually have to cut back on necessities like rent and food. So that just makes the recession deeper and longer by pulling even more economic activity out." 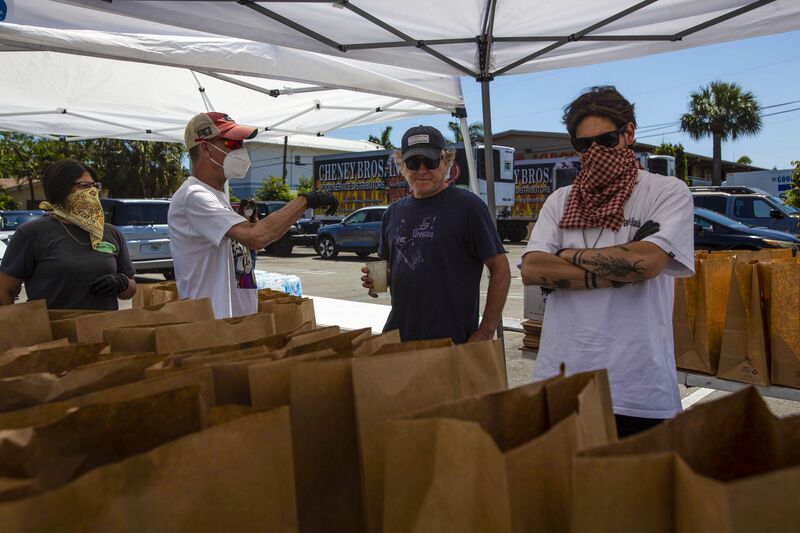 Rodney Mayo, center, and volunteers prepare bags of food to give out to residents outside Howley's Restaurant in West Palm Beach, on April 3.
Photographer: Saul Martinez/Bloomberg

Rodney Mayo, whose 17-location Subculture restaurant group owns Howley's, started handing out free meals in the diner's parking lot on Saturday, March 21, after having to lay off 650 workers the day before.

"They were asking 'Where do we go? What do we do?' All I really had was the unemployment site that was crashing and nobody could file anything on it," Mayo said. "But I did promise them: No matter what, you and your families will get fed by us. And I said tomorrow we'll be open at Howley's."

What started with his own employees quickly grew into a bigger effort as friends, suppliers, and fellow restaurateurs  pitched in, and area charities began sending other people needing meals his way.

Two weeks on, Mayo has opened another of his restaurants to distribute meals and is preparing to open a third. He's also turning a warehouse into a food pantry that will distribute groceries. He has secured funds from the local government and set up a charity called Hospitality Helping Hands that is taking donations to keep the effort going.

The 15,000 meals he gave away in the first ten days cost an average of $1.30 each, Mayo said. The bonus has been being able to rehire some of his kitchen staff and to let the others who volunteer keep tips handed out by passersbys.

Just a few days into April, Mayo already expects that he will be handing out meals into June. Even if and when the $1,200 payments the federal government has promised land and unemployment benefits kick in there will be a lingering need, he said.

The current crisis, Mayo said, shone a spotlight on the divide between the pastel-clad privileged lives in the city of Palm Beach, an enclave on a barrier island connected to the mainland by a series of bridges, and the wider county around it. "There's east of the bridge, which is Palm Beach, and then there's everything west which is everything else," Mayo said. "We have some very poor communities."

Even before the current crisis, three in five children in Palm Beach County's public schools were eligible for federally-funded free or subsidized lunches, a measure of poverty. "When I tell people there's hunger in Palm Beach County people think I'm kidding," said Karen Erren, executive director of the Palm Beach County Food Bank. "But in south Florida our poverty level is always significant."

The threat of Covid-19 infections has caused food pantries in the area to change how they operate, or shut down. About a third of the 125 that the Palm Beach County Food Bank supplies are now closed, Erren said. Also a rush of panic buying has depleted stocks at supermarkets, particularly of shelf-stable foods, meaning donations from grocery chains are shrinking.

Vatske said a sharp reduction in the supply from retailers to Feeding South Florida alongside the surge in demand had almost tripled its running costs. "It costs us about a $125,000 a week to operate under blue skies. Right now we're looking at about $350,000 with having to purchase food. So we'll need about $1.4 million a month to keep this going," she said. 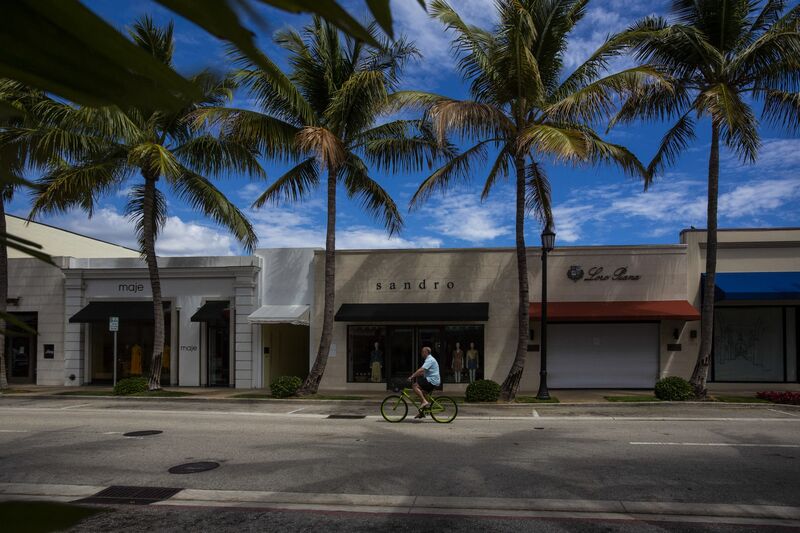 Food banks and pantries are also planning for what they fear will be a longer term effect from the Covid-19 crisis. "What I'm thinking about right now is 'Call me in a month's time. Call me in two month's time.' Because that's when reality will have hit," said Ruth Mageria, executive director of Christians Reaching Out to Society Ministries, in Lake Worth, another town in Palm Beach County.

Local food banks and pantries interviewed for this story said they have not had any contact with the Trump Organization or Mar-a-Lago, which was shut for cleaning last month after a cluster of Covid-19 cases was linked to a member of the entourage of visiting Brazilian president, Jair Bolsonaro and has not reopened.

Neither the club's general manager nor spokespeople for the Trump Organization responded to multiple requests for comment.

Venues with a more upscale clientele than Howley's are doing their part. At The Addison, a venue for weddings and other events in nearby Boca Raton, chefs have started working with a local charity and preparing 100 meals a day for delivery to elderly people stuck inside and other people affected. On the menu one day earlier this week: maple and mustard glazed Atlantic salmon with rice and broccoli.

"We decided since we can't host events we'd use resources to help our non-profit partner," said Melanie De Vito, the business' marketing director. It has helped fill one small gap, De Vito said, in a place where social distancing is far from the norm, "Boca is a very tight-knit community" in which "events are a big thing,'' she said. "Having the socializing stop has been really surreal."

-- via my feedly newsfeed
Posted by The Red Caboose at 6:09 AM