It seems plain from articles like this, and many others, life cannot return to normal without a bigger and more responsive and more powerful public sector with public interest enforcement ability, at Federal, State and Local domains. More socialism.
De Blasio Says Surgical-Gown Shortage Is Crucial Concern in NYC
https://www.bloomberg.com/news/articles/2020-04-20/de-blasio-says-big-concern-is-shortage-of-surgical-gowns-in-nyc

New York City will cancel all of its permitted gatherings and public events through June while it continues to battle the new coronovirus, Mayor Bill de Blasio said Monday.

The cancellations remove from the calendar annual parades through Manhattan that attract hundreds of thousands, including Salute to Israel, Puerto Rican Day and the 50th anniversary of Gay Pride. Smaller gatherings such as softball games in public parks, street fairs and outdoor plays and concerts also are affected. Some may be rescheduled later this year if the epidemic can be contained, the mayor said. 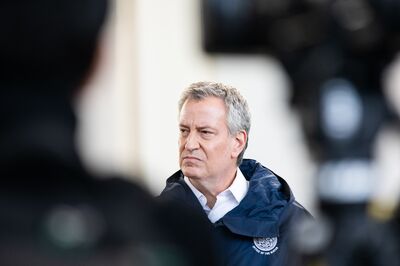 City officials and organizers had estimated the Gay Pride parade, scheduled as part of a two-week celebration in June, would attract 150,000 marchers and 5 million visitors to Manhattan. It was to be part of an international observance of the 50th anniversary of the Stonewall Inn uprising, when patrons of a Greenwich Village gay bar forcibly resisted police efforts to arrest them.

"These kind of community events, we love them, but they're not what we need right now, they're not the most essential things," de Blasio said during a Monday briefing. "We have to recognize when thousands and thousands of people gather in one place, of course that goes against everything we're trying to do."

In the future, when the epidemic enters a less acute phase, it may be possible to conduct fever checks on people entering restaurants, theaters or large events, but as of now there aren't enough thermometers, de Blasio said.

The key to restarting the city's economy and reopening such venues will be gaining the capacity to conduct hundreds of thousands of virus checks a day, "constantly monitoring for who may be sick and getting them the support they need, making sure they're isolated from their families if necessary," de Blasio said.

Reigniting the city's economy also requires federal reimbursement for the costs of containment and mitigation. City spending is already more than $700 million and will reach about $3.5 billion by the end of the year, the mayor said.

The mayor's announcement came on a day of mixed progress and challenges confronting the virus. A shortage of surgical gowns has raised concerns. De Blasio thanked President Donald Trump adviser Peter Navarro, who he said helped New York City get 265,000 Tyvek suits, as well as fabric that will help the city make 40,000 gowns this week and 400,000 by May 23. Yet that's "nowhere near" what the city needs, the mayor said. He asked for more federal help as well as gowns from other states.

De Blasio pointed to data that showed progress in tackling the spread. The number of citywide admissions to hospitals declined, to 212 from 317 on April 17, while public hospital ICU use was up slightly to 853 from 849. Medical emergency calls Saturday dropped to 3,485 from a peak of 6,527 on March 30, and ambulance response times have been cut to 6:43 on Saturday from an average 10:08 in March, the mayor said.

"We have a long way to go, but real progress for sure," he said.