That's the sound the ultra-rich—especially real estate moguls—made as they slurp from the taxpayers' trough, courtesy of a multi-billion dollar tax break or two their GOP handmaidens slipped into the $2.2 trillion economic stimulus law Congress passed on March 18.

The congressional Joint Committee on Taxation blew the formal whistle on that tax cut, which is worth $80 billion this year and another $6.7 billion in the next, in an April 15 report.

The JCT analysis, which was not released until after the stimulus law passed, shows 81.8% of the tax break will go to 43 taxpayers who each declared more than $1 million in earnings last year.

Those are the taxpayers who own private corporations and carry over private "net operating losses." The tax cut would equal all the losses, not just 80%, and the private firms could use them to offset prior profits from the last five years, and future profits as well.

Another 13% of that tax break would go to taxpayers making $200,000 to $1 million. The average windfall for both groups: $1.6 million per taxpayer this year.

Further, a second tax break in the JCT's analysis, entitled "Modification on limitations on losses for taxpayers other than corporations" will bring its recipients $140.6 billion over the next two years.

The lawmakers who asked for the net operating loss data, Sen. Sheldon Whitehouse, D-R.I., and Rep. Lloyd Doggett, D-Texas, sharpened their knives for the pigs when they released preliminary details the day before. They got the data on the $80 billion break, but they asked the White House to justify both.

What wasn't there was who inserted the idea in the economic stimulus law, or which individual taxpayers would benefit. Whitehouse said it was in the GOP-run Senate Finance Committee's version of the stimulus law, but Majority Leader Mitch McConnell, R-Ky., and his staff, reportedly wrote much of that measure.

The identity of the rich taxpayers who will benefit from that break is shielded from public view, by law. But both President Donald Trump and his son-in-law/aide/confidant, Jared Kushner, are real estate moguls. And the Trump Organization, his real estate firm, is privately held.

Trump still refuses to release his tax returns, despite federal law mandating their turnover to congressional tax-writing committees. But an idea of how he could benefit came from the leaked release of the front page of his 1996 tax return, for calendar year 1995, shoved under a door at the New York Times in October 2016. Trump had had to file the return with New Jersey officials when seeking a casino license two decades before.

"It's a scandal for Republicans to loot American taxpayers in the midst of an economic and human tragedy," said Whitehouse, a former Rhode Island state attorney general. "This analysis shows that while Democrats fought for unemployment insurance and small business relief, a top priority of President Trump and his allies in Congress was another massive tax cut for the wealthy. Congress should repeal this rotten, un-American giveaway and use the revenue to help workers battling through this crisis."

After all, regular taxpayers are getting a one-time $1,200 Treasury check per adult, and $500 per child, as part of the economic stimulus lawmakers approved to counteract the coronavirus's cratering impact on people's jobs and the U.S. economy. But the Treasury told big banks they can seize those checks, or parts of them, to pay for overdrawn checking accounts, fees, and charges. 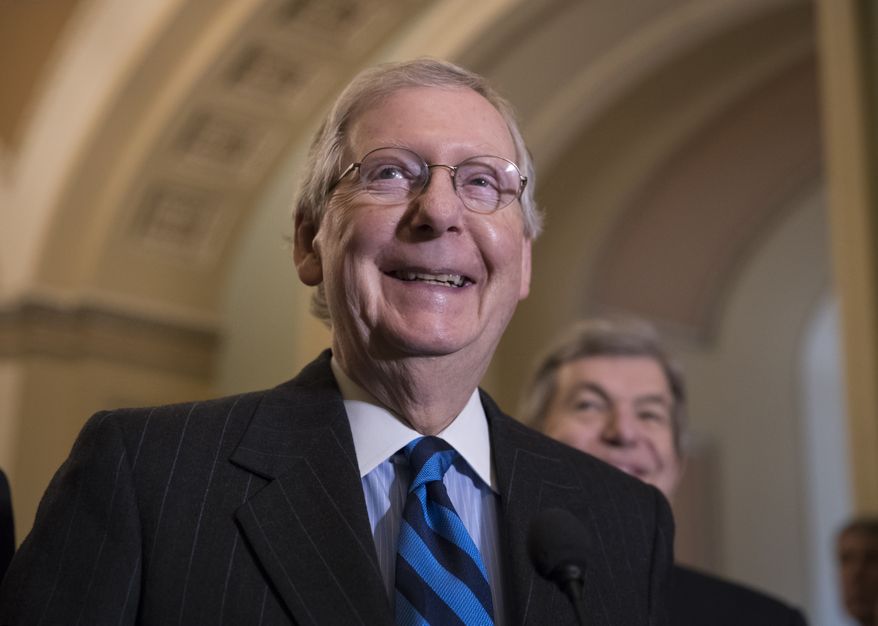 Left unsaid was that the original McConnell-GOP $2.2 trillion measure did not have the $1,200, or the stimulus law's expansion of jobless benefits. Senate Democrats beat back two McConnell attempts to get his measure through without those sections, before he finally yielded.

"For those earning $1 million annually, a tax break buried in the recent coronavirus relief legislation is so generous that its total cost is more than total new funding for all hospitals in America and more than the total provided to all state and local governments" by the economic stimulus law, said Doggett.

"Someone wrongly seized on this health emergency to reward ultra-rich beneficiaries, likely including the Trump family, with a tax loophole not available to middle-class families. This net operating loss loophole is a loser that should be repealed."

Adding together corporate tax breaks in the legislation, the Joint Committee said they would cost the Treasury $195 billion over a decade, most of it this calendar year and next. That prompted Whitehouse and Doggett to demand, in a letter to the White House, texts of all communications between the White House and congressional tax writers about those two sections, before the overall legislation passed.

The response, if they get one, "would let Congress and the American public better understand the provenance of these tax law changes, and assess whether any individuals within the administration who stand to gain from these provisions were involved in their development," the two wrote. They gave the administration 15 days to reply.

-- via my feedly newsfeed
Posted by The Red Caboose at 6:50 AM