Hippie socialism HAS its appeal, and doing good work in California.
The Rescue Operation Bridging a Food Access Gap in California
https://www.yesmagazine.org/social-justice/2020/04/29/coronavirus-food-access-california

By 11 a.m. on a Wednesday in Antioch, California, hundreds of cars are lined up at the Palabra de Dios Community Church. The cars fill the church's ample parking lot and snake up the neighboring service street, spilling into the intersection at the head of the block, past the next traffic light, and the next.

Some of the drivers wear face masks while kids sitting in the back seat play idly on cellphones. Some have made the trip from as far as San Mateo and San Carlos, more than an hour's drive away on the opposite side of San Francisco Bay. All of them are waiting for food.

Most weekdays since the onset of the COVID-19 pandemic, a box truck delivers groceries here: bags of fresh kale, lettuce, and radishes; boxes of apples, limes, and tomatoes; canned beans, pastas, and gallons and gallons of milk and juice. As volunteers from the church unload the truck, others quickly sort the food into single-family grocery boxes to put into each car. 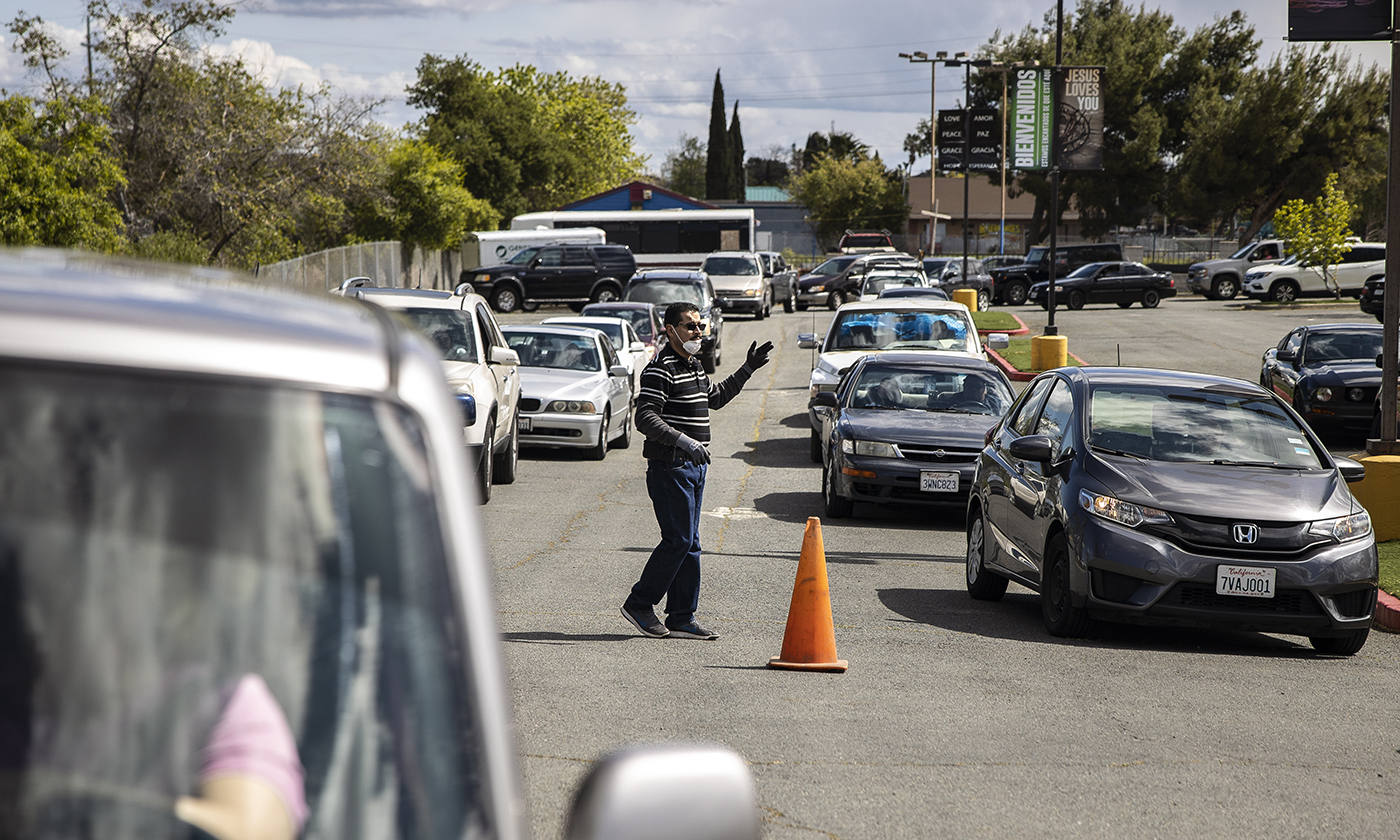 "Our intention here is to provide food to those who truly need it," says Ruben Herrera, pastor of Palabra de Dios. "With a lot of schools closing, no school means no food. There are a lot of families that are thinking of the first of the month. They don't have extra. You take [these parents] out of work, they might not have enough to provide for their children."

Herrera and his congregation don't regularly operate a food drive out of the parking lot of their church, but for many churches, nonprofits, and social service providers, the COVID-19 crisis has prompted a rapid reconfiguration of resources and efforts to address the needs of their communities.

The truckload of food comes from White Pony Express, a nonprofit aimed at alleviating hunger in Contra Costa County. Over the past six years, the staff members at White Pony Express have built and coordinated a growing food redistribution network, in which they "rescue" food with approaching sell-by dates from grocery stores, restaurants, and farmers markets, and redistribute that food to the county's low-income residents via food pantries, schools, and community centers. "We take the abundance from areas that have more than enough and redistribute it to places that don't have enough," says Helen Jones, food rescue operations manager for White Pony Express. "Ultimately, our goal is to eliminate hunger and poverty in the county, to try to balance out the scales." 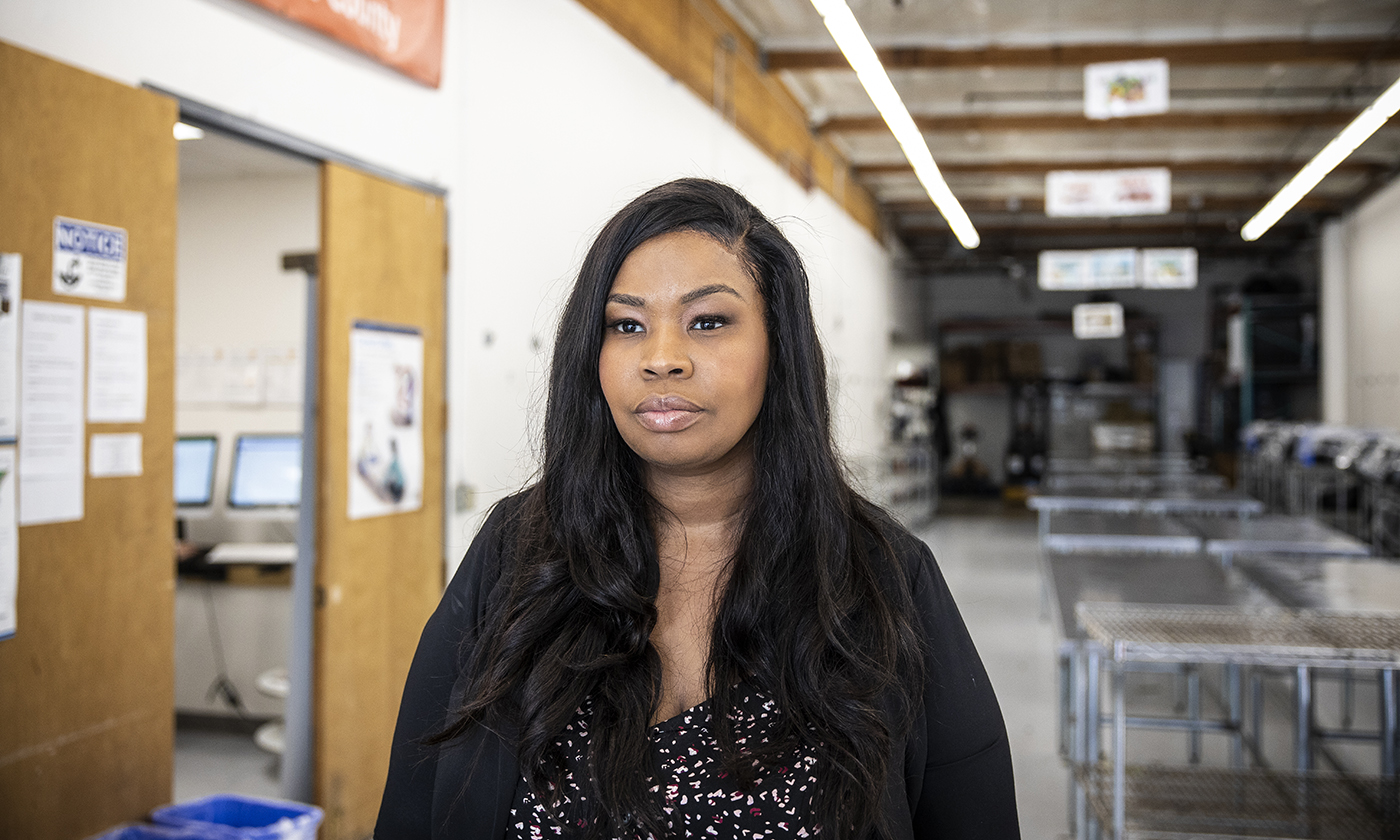 But the COVID-19 crisis has brought a range of challenges to White Pony Express, as it has to all nonprofits addressing food insecurity. With unemployment rates skyrocketing, more families are losing income and trying to get by with less. At the same time, volunteers are more scarce because of social distancing and shelter-in-place orders, grocery stores have cut donations to meet consumer demand, and many distribution sites, such as community centers and schools, have closed indefinitely.

Given the ever-shifting landscape they operate in, Jones and White Pony Express staff have been forced to carve out new avenues to bring food to the community. One of those is Palabra de Dios.

"Things are constantly changing," Jones says. "There have been long nights, a lot of planning and juggling. … It's been a collaborative effort on the team. Everyone's being flexible because this is a fluid situation. They're just happy to be able to be out there serving the community."

Meeting Volunteer Demands in a Time of Social Distancing

Under normal circumstances, White Pony Express receives and distributes about 6,000 pounds of food each day. Drivers of White Pony Express's fleet of box trucks typically visit their donors throughout the Bay Area seven days a week to pick up leftover food—as well as clothing, toys, and other items—and bring them back to the nonprofit's warehouse in Pleasant Hill. There, volunteers sort the donations in hours before loading them back on the truck to head out to the community. Nothing perishable is stored overnight. 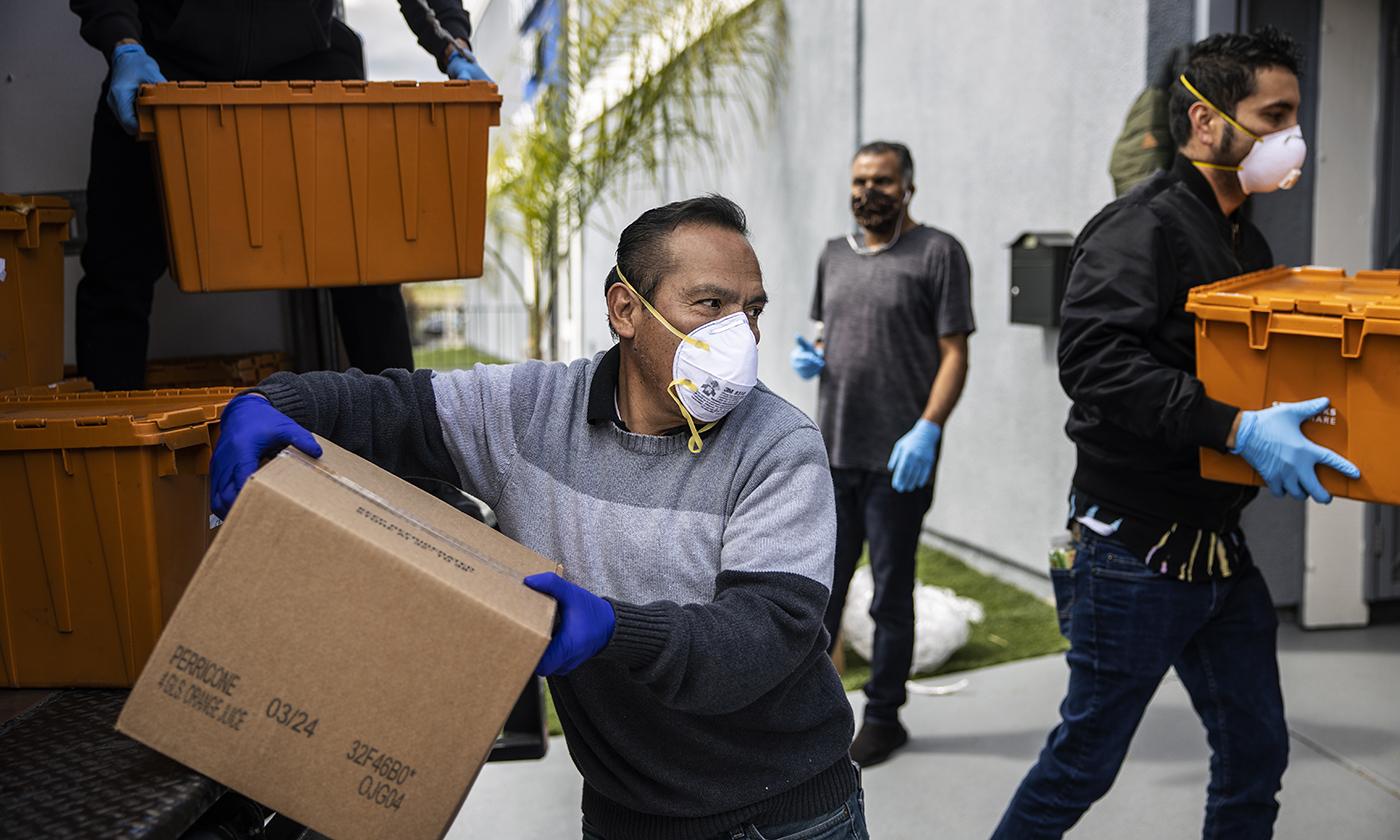 But now, one month into the COVID-19 crisis, things look a bit different at the White Pony Express facility, where about a dozen volunteers wearing masks and gloves tackle a variety of tasks: shucking corn, stacking milk crates, and sorting fruits and vegetables. Social distancing requires volunteers to spread out, and there are far fewer volunteers here than on a normal day.

Volunteer Mindy Bush says many of the regular volunteers have chosen not to come in during the current crisis. Understandably so, because most are 65 and older and therefore most susceptible to the virus. But Bush, whose health and work schedule allow her to continue volunteering, saw this as an opportunity to step up. "Usually I come once or twice a week," she says. "This is my fourth time this week." 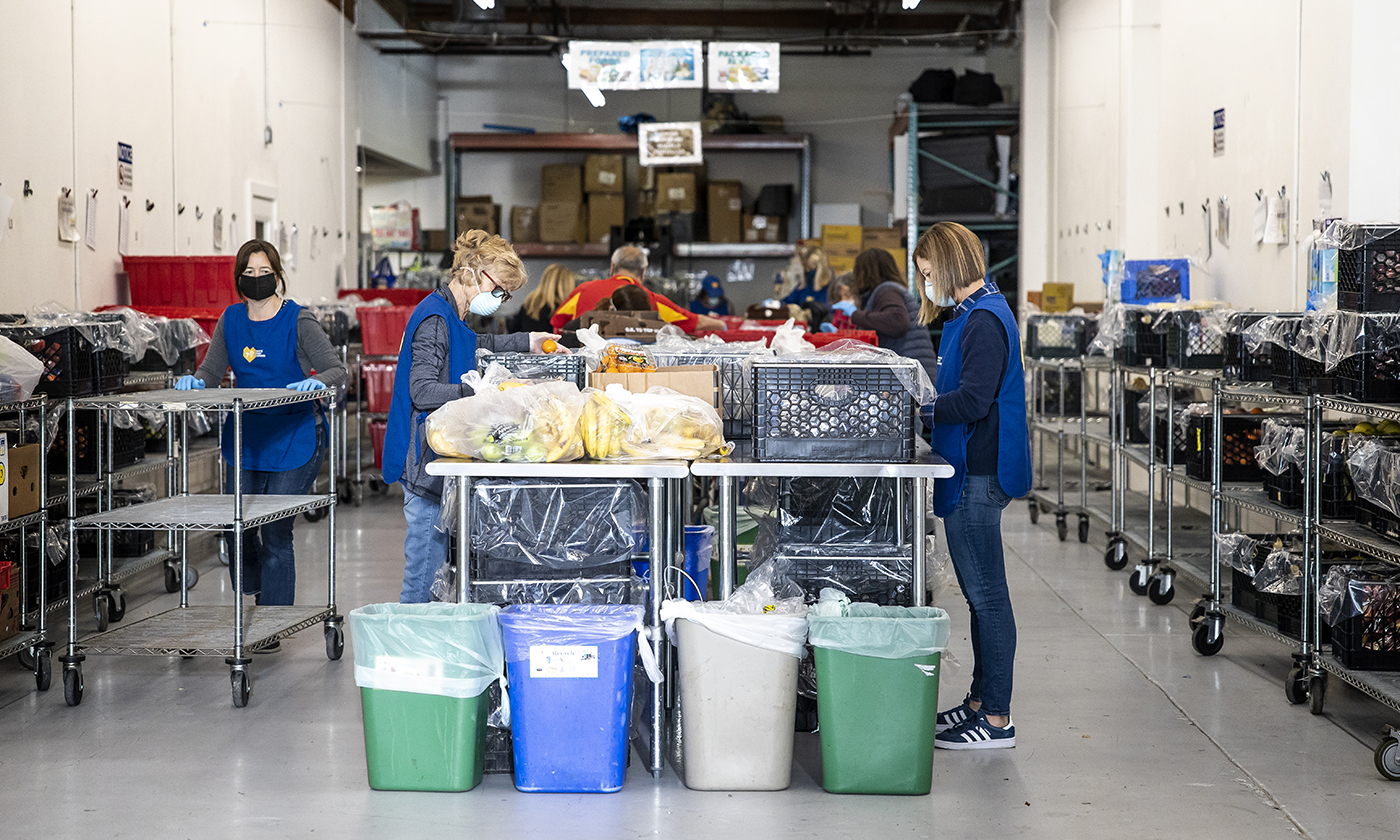 Most of today's volunteers are new. "This is my second day," says Jean Lyons, a part-time grocery store employee, as she works across from Bush to sort rotten fruit from a case of apples. "I love being part of something like this, " she says.

In the meantime, staff members have worked around the clock to tie up loose ends in the food donation supply chain, while many have joined the volunteers sorting food.

"I am working harder, and I'm blessed that I get to," says Cliff Strand, one of the drivers for White Pony Express "This is a time when people need hope. They need someone to deliver that hope."

The crisis has also affected where food donations come from, and where they go once they leave the facility. Since mid-March, White Pony Express has seen a significant reduction in donations from grocery stores, for instance, because of a spike in consumer demand. Whole Foods, Trader Joe's, and other franchises have continued to donate what they can, but intake from grocery stores has fallen by as much as 80%. 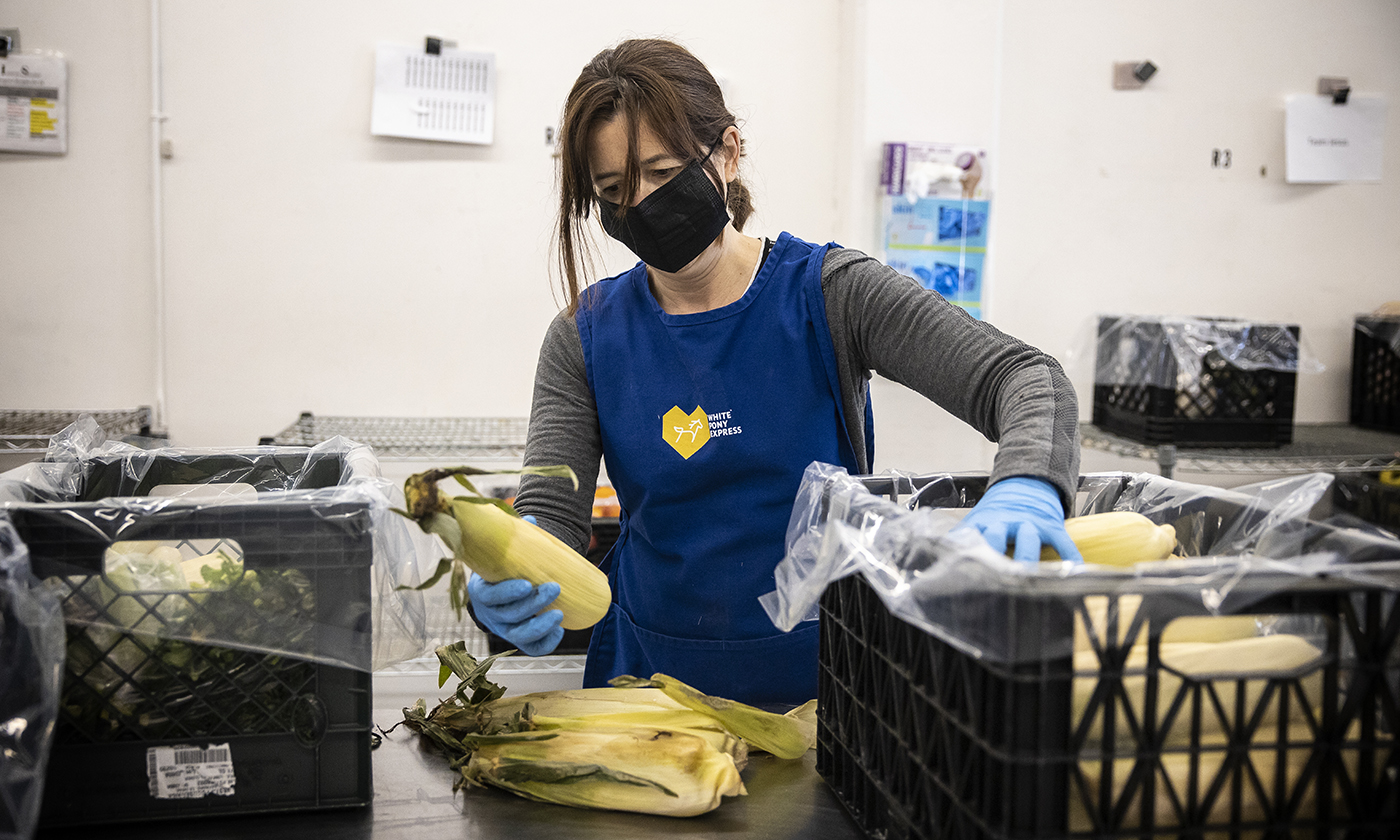 This setback has required White Pony Express to lean on other donors, such as food distributors. For instance, Imperfect Foods, a San Francisco-based company that sources and resells edible food rejected by retailers has donated 140,000 pounds of food to White Pony Express since January. In response to the COVID-19 crisis, the company has been ramping up donations to White Pony Express and other food-focused organizations.

"The issue is not a lack of food," says Reilly Brock, brand storytelling manager for Imperfect Foods. "We often have surplus… Nonprofits like White Pony Express are a huge part of our safety net to make sure we don't waste edible food, and that any time we have food, it's going to someone who needs it."

Under normal circumstances, a large portion of White Pony Express's food supply goes to schools. As part of its food rescue program, White Pony Express identifies schools where at least 80% of the students receive free or reduced-cost lunches to set up school pantries. Twice a week, White Pony Express then delivers up to 1,000 pounds of food to these pantries, where parents are able to pick up groceries. 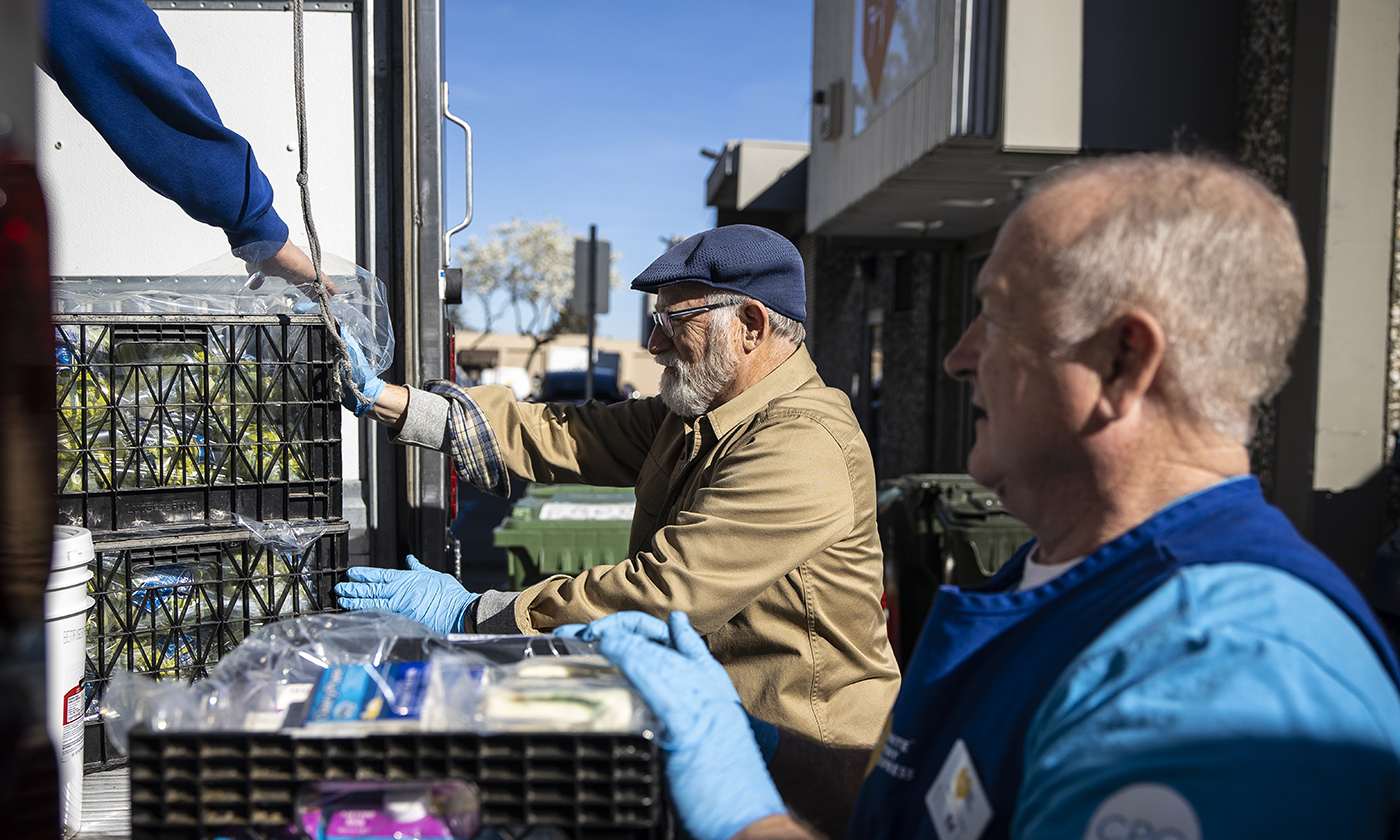 But with schools closed, White Pony Express has been forced to identify new portals into communities that need food. That's where Pastor Herrera and his church come in.

In March, Jones called Herrera. She asked Herrera whether White Pony Express could use his church as a distribution center for families to pick up groceries. Not only did Herrera agree, but he promised to provide volunteers to sort the food and manage the redistribution. "We want to be more than a church. We want to have an impact on our community," he says.

For many volunteers, the food drive at Palabra de Dios has offered a way to give back to the community when they would otherwise be at work or at home. "God taught us to help people," says Roberto Cordoba, a 23-year-old construction worker and member of Palabra de Dios. "If we have stuff already, then why take? Let's give to the people who really need it." 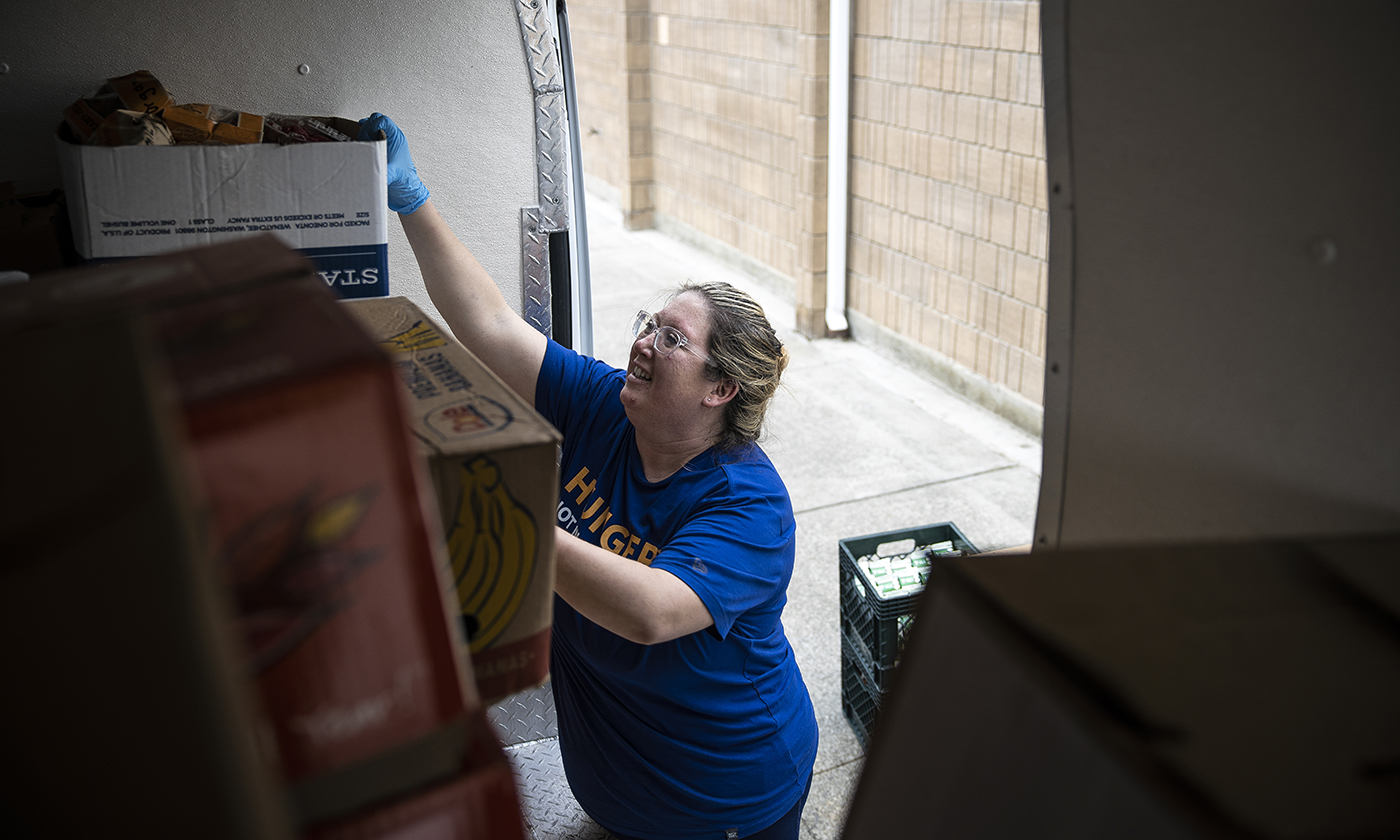 For much of the staff at White Pony Express, responding to the COVID-19 crisis has been a constant shuffle. It has required flexibility and an understanding that conditions change from day to day.

It's unclear how long operations such as the one at Palabra de Dios can continue. For instance, Herrera, who works full-time as an insurance agent in addition to pastoring the church, has been cutting back his work hours to run the food drive. "If I wasn't doing this, I'd be in my office working," he says. "But this is the time for giving. We have it in our hearts to continue."

For many of the staff and volunteers, seeing the line of cars at Palabra de Dios offers proof enough that their work is necessary. "This is a testament to our mission—what we do as an organization on a day-to-day basis and even more so now," Jones says. "We need to step up and provide for those who so desperately depend on us."

This story was produced by Social Care Stories, a multimedia team that spotlights critical social issues across the country and celebrates people who work for positive change in their communities. Social Care Stories is funded by Aunt Bertha, a public benefits corporation that connects people to social services.

-- via my feedly newsfeed
Posted by The Red Caboose at 6:47 AM