Xi Push to End Poverty Underpins Party Support in Rural China
https://www.bloomberg.com/news/articles/2020-09-21/xi-push-to-end-poverty-underpins-party-support-in-rural-china
Ending rural poverty is the key to ending rural idiocy, too, anywhere in the world. Bloomberg's interest in China, you may note, is fundamentally different from that off Bezos (The Washington  Post). -- a riddle in billionaire thinking that probably deserves more research and thought.

Almost a year ago, 26-year-old Luoba Nijinmo moved her family into a brand-new housing estate called "Gratitude Community" in southwest China -- her last step to being officially lifted out of poverty.

The mother of two is among about 10 million people who have been resettled in government-built housing since 2016, part of President Xi Jinping's promise to eradicate extreme rural poverty -- those who earn less than 11 yuan ($1.63) per day -- by the end of this year. He's getting close: Official data show the number of extremely poor rural residents fell to 5.5 million last year from almost 56 million in 2015.

"It's so much better now," Luoba told a foreign reporter this month on a government-organized trip to showcase China's poverty alleviation efforts in Sichuan province. "Living on the mountains, it was inconvenient for the kids to go to school. On rainy days, it was scary because the houses were so old."

China is likely to announce the completion of Xi's goal soon, ahead of next year's 100th anniversary of the Chinese Communist Party's founding. In March, he said the party made a "solemn promise" to end poverty and that "must be met as scheduled, without retreat and without flexibility."

Success will help Xi show the public that the Communist Party is delivering concrete economic gains, which is crucial to maintaining the legitimacy of its one-party rule. It also marks a milestone for China's development after officials embraced market-oriented reforms in the wake of Mao Zedong's tumultuous rule marked by slow growth and famine, propelling its rise to become the world's second-biggest economy.

"Internationally, poverty eradication is one of the most frequently mentioned great achievements when people talk about the changes during China's post-Mao reforms," said Wenfang Tang, a professor at the Hong Kong University of Science and Technology. "This is one of Xi's signature projects that will boost public support."

While China suppresses political dissent that could threaten the party's rule, surveys show that improving public services boosts support for the government, especially in rural regions. Groups from poorer, inland regions were comparably more likely to report increases in satisfaction in the government, according to a study by scholars at Harvard University's Ash Center, which tracked public support from 2003 to 2016.

Still, Xi faces a more immediate problem after the pandemic left millions of migrant workers without a job. While the economy is now recovering, consumption is still well below where it was in 2019 and the rebound likely hasn't replaced lost income for many in rural poor areas.

Earlier this year, Premier Li Keqiang set off a nationwide debate on poverty alleviation when he reminded the public that two-fifths of China's population earned just 1,000 yuan a month on average. "It's not even enough to rent a room in a medium-sized Chinese city," he said during the annual national parliament meeting in May.

Those in urban slums aren't included in China's poverty statistics, and the government's focus on absolute poverty means it ignores a lot of people who are just relatively poor.

"It's the near poor who are affected more by the economic hits this year as a result of the coronavirus and the floods," said Gao Qin, a professor at Columbia University who wrote a book about poverty in China. "These are the people who I would worry more about because they face many similar challenges but don't get the same government support as those below the poverty line." 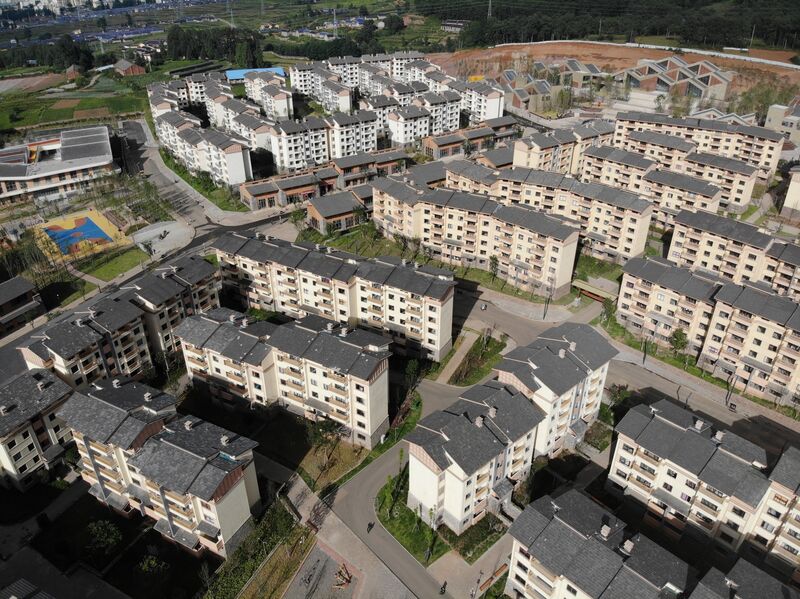 Aerial view of the poverty alleviation relocation sites in Sichuan province, on Aug. 29.

The Organisation for Economic Cooperation and Development defines anyone with income less than half the median as being poor. Using that standard, people in rural areas would need to earn above 7,000 yuan a year in China to escape poverty, as the median rural per capita income was 14,389 yuan last year. China's rural poverty target, however, is still well above the absolute poverty line of the World Bank.

In addition to having sufficient income, China also doesn't consider people to be out of poverty until they have enough food and clothing, guaranteed basic healthcare, access to compulsory education and safe housing. To achieve that, China has mobilized more than 3 million party cadres and bureaucrats from across government and public institutions to help people meet those requirements.

In Sichuan, Liu Wansi is one of those officials who helps residents adjust to their new life. As deputy secretary of the local township party committee for overseeing residential projects such as Gratitude Community, he manages a meticulous log of each household's income and expenditures as well as their changing living standards.

The compound, which cost 420 million yuan to build, houses more than 6,000 people from 38 different ethnic Yi villages. Banners remind residents to be thankful to the party, Xi quotes are plastered on the side of the apartment buildings, and his portrait hangs in each of the more than 1,400 apartments.

Each household owns the apartments after a contribution of 10,000 yuan -- usually accumulated through family and friends, savings or government subsidies. Local officials also run job-training programs and reward them for positive behavior: One of them gives points for picking up the trash, returning lost items or helping to resolve conflicts that can be redeemed for rice or laundry detergent.

Officials also work to root out what they consider to be outdated thinking and customs. "Red White Executive Councils," named after the colors worn at weddings and funerals, seek to control spending at major ceremonies. In Sichuan's Liangshan prefecture, betrothal gifts are capped at 60,000 yuan and no more than two cows should be killed to feed funeral banquets. 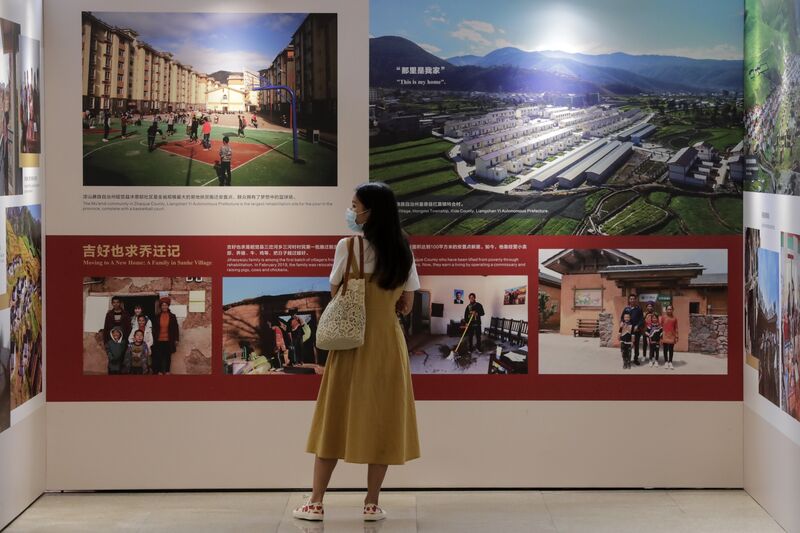 A woman looks at the photos showing rural poverty alleviation schemes across the Sichuan province, on Sept. 9.

There's been some problems with the program. In 2018, the last full year for which data are available, 177,000 people were punished in poverty alleviation-related corruption cases, according to the party's anti-graft watchdog. Villagers have also complained about an unequal distribution of funds, and relatively well-off residents gaming the system to gain some of the program's benefits.

Still, the program has been lauded by millions of people like Luoba. Her husband took a job last month harvesting potatoes about 2,000 kilometers (1,240 miles) away in Hebei province that nets him around 150 yuan a day, which over the course of a year would be about three times more than the official poverty line.

"Top-down mobilization propels the whole bureaucracy to meet Xi's mandate -- eradicating poverty -- at any cost," said Yuen Yuen Ang, associate professor of political science at the University of Michigan and author of How China Escaped the Poverty Trap. "Its strength is also its weakness. Results will look impressive because they must, but if extreme measures are used to achieve them, they bring unintended problems down the road."

-- via my feedly newsfeed
Posted by The Red Caboose at 5:11 PM