In March and April of this year, the economy lost an unprecedented 22.1 million jobs. From May to August, 10.6 million of these jobs returned. But nobody should take excess comfort in the fast pace of job growth in those months. It was widely expected that the first half of jobs lost due to the COVID-19-driven shutdowns were going to be relatively easy to get back. But even with the jobs gained since April, the economy remains 11.5 million jobs below its pre-pandemic level in February, and the low-hanging fruit have been largely plucked. One of the key factors that will radically slow the pace of job growth in coming months is the looming state and local fiscal crisis. Using data from the recovery from the Great Recession, we simply show how state and local austerity and job loss can be a lagging indicator, putting severe downward pressure on growth even years after the official recession ends. We find:

These data are presented below in Figure A. Figure B presents job-losses for state and local and private sector jobs, both indexed to their December 2007 business cycle peak. The upshot of this analysis for today's policymakers is clear: the severe blow to state and local budgets caused by the coronavirus shock is going to drag on growth for years to come absent bold action from federal policymakers. In the case of the Great Recession, the combined effect of job cuts and cuts to other state and local spending delayed a full recovery to pre-Great Recession unemployment rates by more than four years. The lessons could not be clearer: without substantial federal aid to state and local governments, and soon, our near-term economic future will be substantially worse. 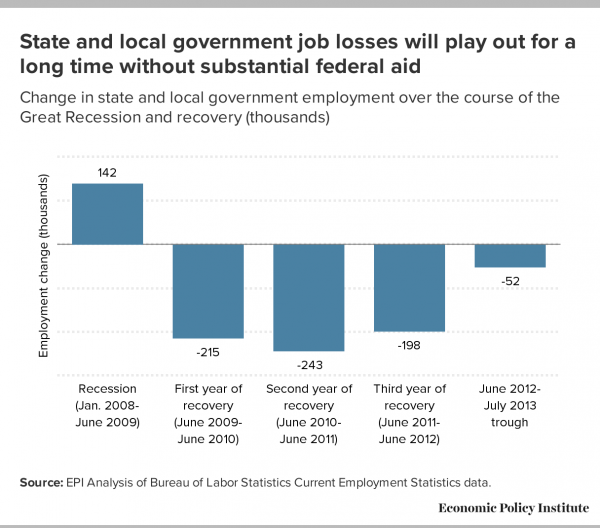 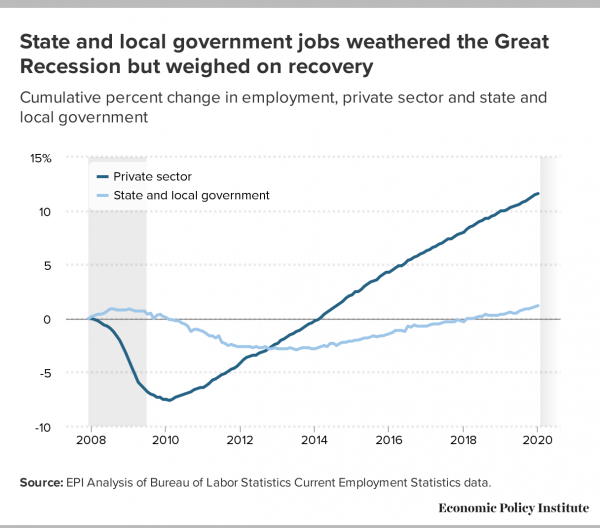 Too many policymakers have become far too complacent about the economy's near-term. Between the pulling back of enhanced unemployment insurance (UI) benefits and the near-total inaction on aiding state and local governments' fiscal situation, the next few months will see the economy suffer the effects of having sailed over a pronounced fiscal cliff. So far, the macroeconomic effects of this fiscal cliff have been blunted by the fact that the enormous increase in household savings undertaken during the COVID-19-driven shutdowns has been unwinding. Private, household spending has been the main engine lifting the economy out of the deep well it was in during March and April. It is highly unlikely that this private savings alone can be drawn on enough to neutralize the coming effect of state and local contractions. 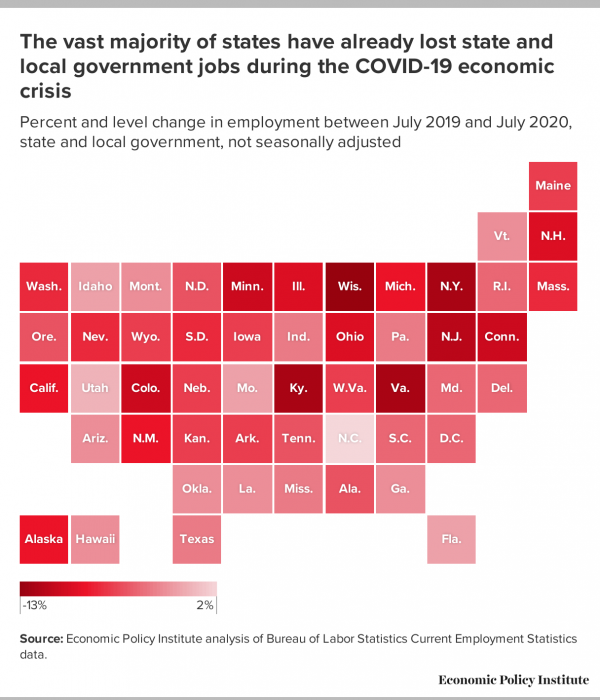 These losses cause particular harm to women and Black workers, since they are disproportionately represented in the state and local government workforce. Any impending state and local budget cuts will fall heavily on their shoulders.

Gutting state and local spending during the current recovery would be particularly perverse given how crucial the health and education sectors will be in living with COVID-19 over the next year. School systems will need to spend more, not less, to effectively and safely teach children in the face of hybrid or online learning. Federal dysfunction in getting the virus under control has put huge burdens for doing the right things on virus suppression on state and local governments.

The response to COVID-19 from policymakers has been a repeated series of getting caught behind the curve. Some of this was likely inevitable in dealing with an unforeseen pandemic. But failing to provide state and local aid would be a completely foreseen and unforced blunder, one that will greatly hamper recovery and cause unnecessary suffering.

-- via my feedly newsfeed
Posted by The Red Caboose at 7:04 AM