President Trump has attacked workers’ safety, wages, and rights since day one [feedly]

From President Trump's first day on the job, his administration has systematically promoted the interests of corporate executives and shareholders over those of working people. The current administration has rolled back worker protections, proposed budgets that slash funding for agencies that safeguard workers' rights, wages, and safety, and consistently attacked workers' ability to organize and collectively bargain. The pandemic has provided the administration an opportunity to continue its attack on workers' rights. We recently published a report that looks at the 50 most egregious actions the Trump administration has taken against workers, but here we take a look at five of the worst actions:

The Trump administration failed to adequately address the coronavirus pandemic.

Despite the widespread reach of COVID-19 in the workplace, the Occupational Safety and Health Administration (OSHA) has refused to issue an Emergency Temporary Standard to protect workers during the pandemic. OSHA is also failing to enforce the Occupational Safety and Health Act during the pandemic. Despite nearly 10,000 complaints from workers about unsafe working conditions from COVID-19, the agency has only issued a handful of citations for failure to protect workers. In addition, the Centers for Disease Control issued dangerous guidelines that allowed essential workers to continue to work even if they may have been exposed to the coronavirus—as long as they appear to be asymptomatic and the employer implements additional limited precautions. The lack of these basic protections has led to thousands of essential workers becoming infected with the coronavirus, and many have died as a result.

While Congress passed Families First Coronavirus Relief Act (FFCRA) and the CARES Act to provide workers with temporary paid sick leave and unemployment insurance (UI) expansion, the Trump administration issued temporary guidance that weakened worker protections under these relief and recovery measures. For example, the Department of Labor (DOL) excluded millions of workers from paid leave provisions under the FFCRA, including 9 million health care workers and 4.4 million first responders, before revising the rule after a federal judge invalidated parts of the original rule in August. Further, the Trump administration has vehemently opposed the extension of the $600 increase of unemployment insurance benefits and additional aid to state and local governments. The lack of fiscal relief will cost millions of jobs, including 5.3 million jobs due to insufficient federal aid to state and local governments and 5.1 million jobs due to the expiration of the $600 boost in UI.

Since Trump took office, the Department of Labor (DOL) rolled back numerous regulations that protected the wages of working people. For starters, the Trump DOL prevented millions of workers from receiving overtime pay by not defending the Obama administration's 2016 overtime rule, but instead finalizing their own, weaker overtime rule in September 2019. Roughly 8.2 million workers who would have benefited from the 2016 rule have been left behind by the Trump administration's rule.

The Trump DOL also finalized a new joint-employer standard under the Fair Labor Standards Act (FLSA), which narrowed the set of circumstances whereby a firm could be deemed a joint employer under the FLSA. The Trump DOL's final rule substantially limits shared liability for wage and hour violations, making it harder for workers to hold all parties who set their terms of employment accountable. EPI estimated the ruling will cost workers more than $1 billion annually. A federal court struck down most of this rule, holding that the Trump DOL failed to account for some of the rule's "important costs, including costs to workers."

One of the Trump DOL's most egregious rulemakings was the proposed "tip stealing" rule, which would allow employers to pocket the tips of their employees, so long as workers are paid the minimum wage. EPI's estimates showed that, if finalized, the rule would have resulted in $5.8 billion in lost wages of tipped workers each year. However, before the rule was finalized, reports found that the Secretary of Labor went to great lengths to hide DOL's economic analysis that showed the rule would have been costly to workers. In the wake of this news, Congress added a section to the Fair Labor Standards Act that prohibits employers from keeping tips received by employees, ultimately making the proposed rule invalid.

Under President Trump, the National Labor Relations Board (NLRB) has systematically rolled back workers' rights under the National Labor Relations Act (NLRA), which provides workers the fundamental right to organize and bargain collectively. The Trump NLRB has engaged in an unprecedented number of rulemakings aimed at overturning existing worker protections, including narrowing the joint-employer standard under the NLRA and obstructing workers' right to fair union elections. Further, the Trump NLRB has issued a series of significant decisions weakening worker protections such as hindering workers' ability to organize during non-work hours and allowing the misclassification of workers. As a result, the Trump NLRB has completed the wish list of the U.S. Chamber of Commerce—the largest corporate lobbying firm in the U.S. 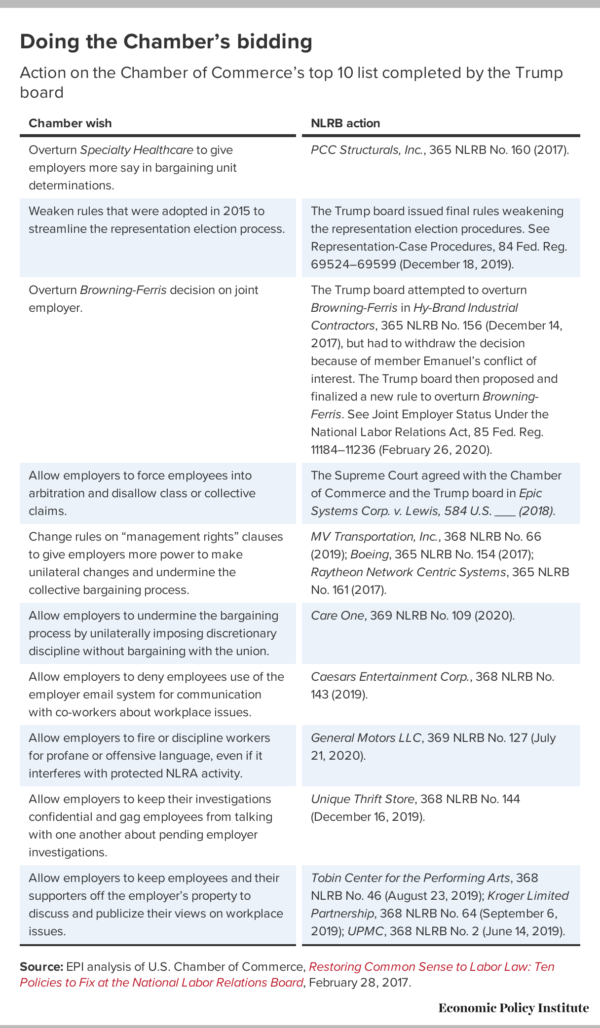 However, the NLRB is not working alone in attacking workers' collective bargaining rights. President Trump has issued several executive orders that eroded the collective bargaining rights for federal workers, including limits on the use of official time for collective bargaining activities and weakening due process protections for federal workers subject to discipline. And when the U.S. House of Representatives passed the Protecting the Right to Organize (PRO) Act, which would significantly restore workers' right to organize and bargain collectively, the Office of Management and Budget issued a Statement of Administration Policy that recommended President Trump to veto the bill if it reached the president's desk.

Since the passage of the Affordable Care Act (ACA), nearly 20 million people have gained health insurance coverage. The ACA, among other provisions, provides a number of protections for workers who receive health insurance through their employers. It requires large firms to provide health insurance to workers or pay a penalty. It requires that employer-sponsored insurance (ESI) have no caps on benefits paid for essential health services. It also requires caps on individual out-of-pocket spending in ESI plans. It allows children to stay on parents' ESI plans until the age of 26. Additionally, it mandates maternity coverage and free preventative care from ESI plans. And it limits waiting periods for when workers could qualify for ESI plans.

Over the last three years, Trump administration has sided with Congressional Republican allies in attempts to repeal the Affordable Care Act (ACA) in 2017, asked the Supreme Court to rule the ACA unconstitutional in its entirety on a wafer-thin legal justification, and weakened the ACA greatly as part of the 2017 tax cut for corporations. Finally, even in the face of millions of workers losing their ESI due to the COVID-19 economic shock, the Trump administration not only persisted in its efforts to repeal the ACA (through its request to the Supreme Court), but it also did nothing to make it easier for workers losing ESI to slide into coverage under the ACA marketplace exchanges, even though an administrative fix was easily available at the time.

President Trump has put forth numerous anti-worker nominees for agencies in charge of protecting workers. Andrew Puzder, former CEO of a company with a record of labor law violations, withdrew his nomination for Labor Secretary less than a month after his nomination after strong opposition from worker advocates. President Trump's first confirmed Secretary of Labor, Alexander Acosta, advanced a pro-business agenda by delaying and rolling back many workplace protections the Obama administration implemented, most notably the 2016 overtime pay rule. Eugene Scalia, President Trump's current Secretary of Labor, built a career representing corporations, financial institutions, and other business organizations while fighting against worker protections like health and safety regulations, retirement security, and collective bargaining rights.

The Trump administration also stacked the National Labor Relations Board with corporate lawyers and a former Republican Hill staffer. In September 2017, William Emanuel, a former attorney at the Littler Mendelson law firm who regularly represented large employers, was confirmed as a member of the NLRB, along with Marvin Kaplan, a former Republican Hill staffer. Later in November 2017, Peter Robb, who spent much of his career as a management-side labor and employment lawyer, was confirmed as the NLRB's General Counsel, and John Ring, another corporate-side lawyer, was confirmed and made chairman in April 2018. These Trump appointees have systematically rolled back workers' rights under the National Labor Relations Act.

Furthermore, President Trump stacked the Supreme Court with anti-worker justices Neil Gorsuch and Brett Kavanaugh, both with records of ruling against workers and siding with corporate interests. Justice Gorsuch was the deciding vote in two Supreme Court cases that dramatically impacted workers' rights: Janus v. AFSCME, Council 31, which stripped public-sector workers of their right of fair share agreements, and Epic Systems Corp. v. Lewis, which allows employers to require employees to waive their right to class or collective claims.

-- via my feedly newsfeed
Posted by The Red Caboose at 4:51 PM