First UI claims of 2021 are still higher than the worst of the Great Recession
https://www.epi.org/blog/first-ui-claims-of-2021-are-still-higher-than-the-worst-of-the-great-recession/

There was an armed insurrection at the U.S. Capitol yesterday in which the police were complicit in a way that has everything to do with structural racism. Structural racism has also meant that Black and Latinx working people are experiencing a disproportionate health and economic impact of the COVID-19 pandemic. The UI data released this morning show a labor market in turmoil as COVID-19 surges.

Another 948,000 people applied for Unemployment Insurance (UI) benefits last week, including 787,000 people who applied for regular state UI and 161,000 who applied for Pandemic Unemployment Assistance (PUA). The 948,000 who applied for UI last week was a decrease of 152,000 from the prior week. That drop was driven almost entirely by a drop in PUA claims, undoubtedly due to uncertainty over whether PUA would be extended, as Trump delayed signing the relief bill during that week. Now that the program has been extended (more on that below), I expect PUA claims to rise again in coming weeks.

Most states provide 26 weeks (six months) of regular benefits. Given the length of this crisis, many workers have exhausted their regular state UI benefits. In the most recent data, continuing claims for regular state UI dropped by 126,000. After an individual exhausts regular state benefits, they can move onto Pandemic Emergency Unemployment Compensation (PEUC), which is an additional 24 weeks of regular state UI (the December COVID-19 relief bill increased the number of weeks of PEUC eligibility by 11, from 13 to 24).

However, in the most recent data available for PEUC, the week ending Dec 19, PEUC claims dropped by 293,000. That was undoubtedly due to exhaustions. Well over 2 million people had exhausted the original 13 weeks of PEUC before Congress passed the extensions (see column C43 in form ETA 5159 for PEUC here). These workers are eligible for the additional 11 weeks, but they will need to recertify. We can expect PEUC numbers to swell dramatically as this occurs.

Continuing claims for PUA also dropped, by 71,000, in the latest data. The latest data for this series is also for the week ending December 19—so before the relief bill, meaning some of that drop would have been exhaustions, i.e. temporary. The COVID-19 relief bill also extended the total weeks of eligibility for PUA by 11, from 39 to 50 weeks. As with PEUC, those who had exhausted the original 39 weeks of PUA before Congress passed the extensions are eligible for the additional 11 weeks, but they will need to recertify. Workers who were still on PUA (or PEUC) when Congress passed the bill will not need to recertify.

The 11-week extensions of PEUC and PUA just kick the can down the road—they are not long enough. Without additional action by Congress, millions will exhaust benefits in mid-March, when the virus is still surging and job opportunities are still scarce.

Figure A shows continuing claims in all programs over time (the latest data are for December 19). Continuing claims are still more than 17 million above where they were a year ago, even with the exhaustions occurring during the time period covered by this chart. 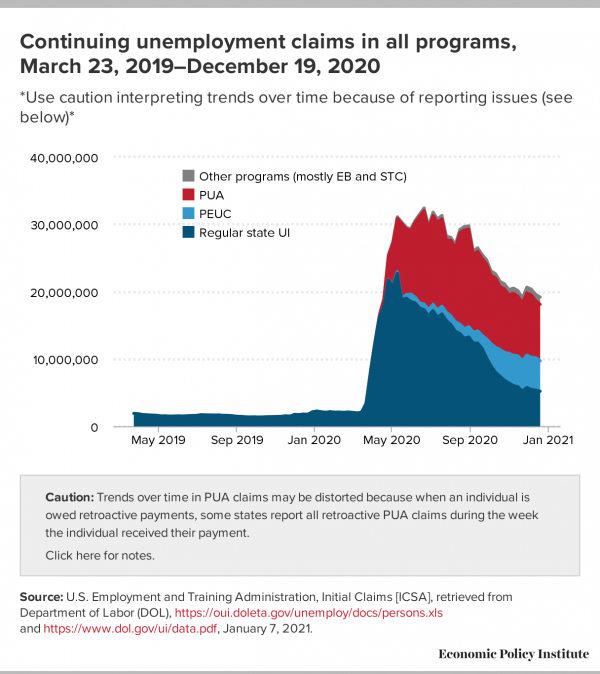