This morning the Department of Labor (DOL) released the first official economic data collected during the Biden presidency—initial unemployment insurance claims from last week (well, half of last week was in the Biden presidency). What it shows is that Biden inherited an extremely weak labor market.

In the most recent data available for PEUC, the week ending Jan. 9, PEUC claims rose by 837,000. This increase partially reversed the prior week's drop, which was due to the temporary lapse in pandemic UI programs before Trump signed the December COVID-19 relief bill. But we can expect them to continue to rise further in coming weeks. Over 3.5 million people had exhausted the original 13 weeks of PEUC by the end of December (see column C43 in form ETA 5159 for PEUC here). These workers are eligible for the additional 11 weeks, but they need to recertify. PEUC numbers will continue to swell as this occurs.

Continuing claims for PUA increased by 1.6 million in the latest data, the week ending Jan. 9. The large jump in PUA almost fully reverses the prior week's drop, which was also due to the temporary lapse described above. The December bill extended the total weeks of PUA eligibility by 11, from 39 to 50 weeks. As workers who exhausted PUA before the extensions were signed get back on PUA, we can expect the PUA numbers to swell further.

The 11-week extensions of PEUC and PUA just kick the can down the road—they are not long enough. Congress must pass further extensions before mid-March or millions will exhaust benefits at that time, when the virus is still rampant and the labor market is still weak.

Figure A shows continuing claims in all programs over time (the latest data are for Jan. 9). As described above, the recent volatility in PUA and PEUC is due to temporary lapses in those programs before Trump signed the December bill. Continuing claims are currently nearly 16 million above where they were a year ago. 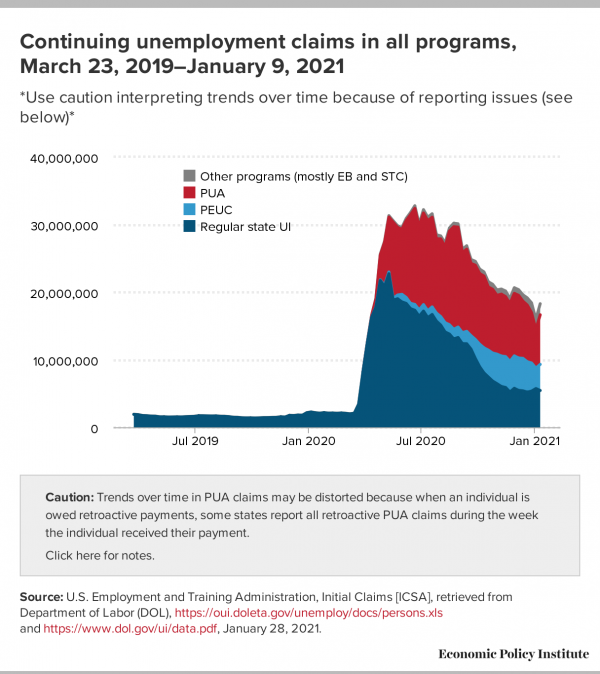 There are now 26.8 million workers—15.8% of the workforce—who are either unemployed, otherwise out of work because of the virus, or have seen a drop in hours and pay because of the pandemic. Further, we started losing jobs again in December. More relief is desperately needed. A key reason more relief is so important is that this crisis is greatly exacerbating racial inequality. Due to the impact of historic and current systemic racism, Black and Latinx workers have seen more job loss in this pandemic, and have less wealth to fall back on. The $900 billion December COVID-19 relief bill was not nearly enough. To get the economy back on track in a reasonable time frame, we need policymakers to pass an additional roughly $2 trillion in fiscal support. In particular, it is crucial that Congress provide substantial aid to state and local governments. Without this aid, austerity by state and local governments will result in cuts to essential public services and the loss of millions of jobs in both the public and private sectors.

President Biden announced a relief and recovery package that gets the economics right; his proposal is at the scale of the economic challenge we are facing and is a clear break from the mistakes we have made in past recoveries, when we hobbled the economy by not doing enough. With their slim majority in the Senate, Democrats can now get crucial relief measures through reconciliation, and they must be bold. Top priorities include COVID and vaccine measures, aid to state and local governments, additional weeks of UI, and increased UI benefits.

-- via my feedly newsfeed
Posted by The Red Caboose at 4:23 AM