Notes on a Butter Republic

By Paul Krugman
Still on vacation, and I'm currently in Denmark – in fact, just cycled from Copenhagen to Helsingor, aka Elsinore. Sad to say, I'm such a fearsome nerd that instead of thinking about Shakespeare, my thoughts have turned to … economics. For Denmark's story is, I'd argue, of considerable interest to the rest of us.

To be clear, I am in no sense an expert on the Danish economy, now or in the past. I only know what I read and can pull out of readily available databases. So this is really about using Denmark as a mirror to hold up to the rest of the world. But it's an interesting mirror (and much nicer to think about than the outrages at home.) There are, in particular, two lessons I think Denmark can teach us: a hopeful story about globalization, and another hopeful one about the possibilities of creating a decent society.

Blessed are the cheesemakers

OK, as a helpful bystander points out in Life of Brian, it's a metaphor, not to be taken literally: the blessing extends to all manufacturers of dairy products. The blessing certainly worked in the case of Denmark.

During the creation of the first global economy, the one made possible by railroads, steamships, and telegraphs, the world seemed to bifurcate into industrial nations and the agricultural raw/material producers who catered to them. And the agricultural nations, even if they grew rich at first – e.g., Argentina – seemingly ended up getting much the worse of the deal, turning into banana republics crippled economically and politically by their role.

But Denmark became, not a banana republic, but a butter republic. Steamships and steam-powered cream separators allowed Denmark to become a huge exporter of butter (and pork) to the UK, leading in turn to impressive prosperity on the eve of World War I.

One interesting point about this export surge is that in a way it was value-added production, like the exports of modern developing economies that rely on imported inputs – except that in Denmark's case it was imports of animal feed from North America that helped provide a crucial edge.

The good news was that this agricultural orientation didn't turn out to be a dead end. Instead, it laid the foundation for excellent performance over the long run. And in Denmark's case globalization seems to have been equalizing, both politically and economically: instead of fostering dominance by foreign corporations or domestic landowners, it led to dominance by rural cooperatives.

Why was the Danish story so happy? The Danes may have been lucky in the product in which they turned out to have a comparative advantage. Also, like the Asian countries that led the first wave of modern developing-country growth, they came into globalization with a well-educated population by world standards. They may also have been lucky in the enlightened behavior of their elites.

Anyway, I'm not pushing a universal lesson that globalization is great for everyone; just the opposite. The point is that the results depend on the details: a country can produce agricultural products, be "dependent" by most definitions, yet use that as the basis for permanent elevation into the first world.

And in today's world, Denmark manages to be very open to world trade, while having very low levels of inequality both before and after redistribution. Globalization need not be in conflict with social justice. Speaking of which …

A number of people on the U.S. right, and some self-proclaimed centrists, seem totally taken aback by the rise of politicians who call themselves socialist. But this rise was predictable and predicted.

Here's what happened: for decades the right has tried to shout down any attempt to sand down some of the rough edges of capitalism, whether through health guarantees, income supports, or anything else, by yelling "socialism." Sooner or later people were bound to say that if any attempt to make our system less harsh is socialism, well, they're socialists.

The truth is that there are hardly any people in the U.S. who want the government to seize the means of production, or even the economy's commanding heights. What they want is social democracy – the kinds of basic guarantees of health care, protection against poverty, etc., that almost every other advanced country provides.

Denmark, where tax receipts are 46 percent of GDP compared with 26 percent in the U.S., is arguably the most social-democratic country in the world. According to conservative doctrine, the combination of high taxes and aid to "takers" must really destroy incentives both to create jobs and to take them in any case. So Denmark must suffer from mass unemployment, right? 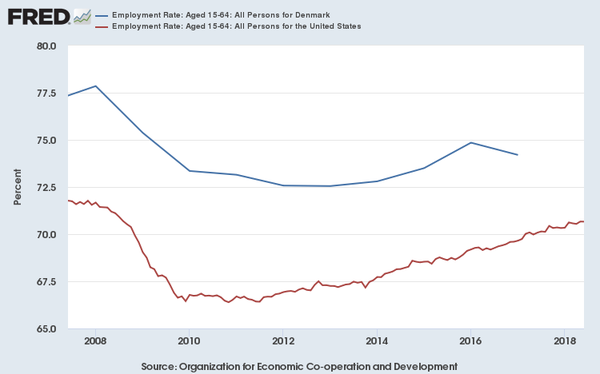