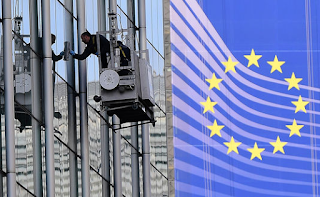 --
In less than four months, France will have a new president, but will the president be a man or a woman? After Trump and Brexit there is a risk that the opinion polls will be wrong once again and that Marine Le Pen's nationalist right wing will come close to winning. Even if the cataclysm is avoided this time there is a real risk of her succeeding in appearing to be the only credible opponent to the liberal right for the next elections. On the radical left, hopes are of course pinned on Jean-Luc Mélenchon but unfortunately he is not the most likely winner.

These two candidates do have one point in common: they both challenge the European treaties and the present system of cut-throat competition between countries and territories, which does attract many of those who have been left behind by globalisation. They do also have fundamental differences: Mélenchon, despite divisive rhetorical outbursts and at times an alarming geo-political imagination, does nevertheless tend towards a progressive and internationalist approach.

The risk of this presidential election is that all the other political forces – and the mainstream media – will simply castigate these two candidates and put them in the same box labelling them as 'populists'. This new ultimate political insult, which has already been used with notable success in the United States in relation to Sanders, may blind us to the fundamental issues. Populism is merely a somewhat confused but legitimate response to the feeling of abandonment experienced by the working classes in the advanced countries in the face of globalisation and the rise of inequalities. To construct specific answers to these challenges, we have to build on the most internationalist populist elements – therefore on the radical left – represented here and there by Podemos, Syriza, Sanders or Mélenchon, whatever their limits; otherwise the retreat into nationalism and xenophobia will prevail.

Unfortunately it is the strategy of denial which the candidates on the liberal right (Fillon) and centre (Macron) intend to adopt as both are going to defend the integral status quo of the 2012 European Budgetary Treaty. There is nothing surprising about this: Fillon negotiated it and Macron applied it. All the opinion polls confirm that these two candidates appeal primarily to those who have gained from globalisation, with interesting differences (Catholics rather than the trendy middle classes or 'bobos') but which are, in the last resort, secondary in relation to the social question. They claim to represent a rational approach: once France has regained the confidence of Germany, Brussels and the markets, by opening up the labour market, reducing expenditure and deficits, eliminating the wealth tax and raising VAT, the time will have come to invite our partners to show some goodwill in matters of austerity and the debt.

The problem with this apparently rational rhetoric is that it is not in the slightest rational. The 2012 Treaty was a monumental mistake which has ensnared the Euro zone in a fatal trap, by preventing it from investing in the future. Historical experience demonstrates that it is impossible to reduce a public debt of this size without resorting to exceptional measures. The only way out is to forcibly produce primary surpluses for decades which puts severe pressure on any investment capacity.

Thus from 1815 to 1914, the United Kingdom spent a whole century in achieving huge primary surpluses to repay its own annuitants and reduce the massive debt which was the outcome of the revolutionary wars (over 200% of GDP). This ill-judged choice contributed to the under-investment in education and the later slow-down in productivity of the country. On the contrary, between 1945 and 1955, a combination of debt cancellations, inflation and one-off levies on private capital enabled Germany and France to quickly get rid of a similar debt. This meant they could invest in growth. The same thing should be done today, by imposing on Germany a Euro Zone Parliamentary Chamber to reduce the debts with full democratic legitimacy. If not, the lag in investment and the slowdown in productivity already observed in Italy will end up by spreading to France and the whole Euro zone (there are already signs of this).

It is by going back into the depths of history that we will overcome the current stumbling blocks, as we have just been reminded by the authors of this magnificent 'world history of France' (Histoire mondiale de la France, edited by Patrick Boucheron, Seuil, 2017), a real antidote to the identity-related tensions in France.

From a more mundane and less rosy point of view, we do also have to accept participation in the primary organised by the left wing of the government (we refer to it in these terms since the attempt to organise a joint primary with the radical left was unsuccessful, with the risk that it may be permanently excluded from government). It is essential that this primary designate a candidate who is committed to an in-depth review of the European regulations. Hamon and Montebourg seem closer to this line than Valls or Peillon, provided that they go beyond their positions on the universal income and the 'made in France' and that they finally formulate specific proposals in place of the 2012 Budgetary Treaty (hardly mentioned in the first televised debate, perhaps because they all voted it five years ago: but this is precisely why it is all the more urgent to clarify things by presenting a detailed alternative). All is not lost, but it is urgent to act, if we wish to avoid putting the FN (Front National) in a position of power.
John Case
Harpers Ferry, WV
The Winners and Losers Radio Show
7-9 AM Weekdays, The EPIC Radio Player Stream,
Sign UP HERE to get the Weekly Program Notes.
Check out Socialist Economics.
Check out The EPIC Radio website
Posted by The Red Caboose at 3:24 AM