Tim Taylor: The US-Chinese Trade War: Why Now? At What Cost? [feedly]

The US-Chinese Trade War: Why Now? At What Cost?
Tim Taylor
http://conversableeconomist.blogspot.com/2019/06/the-us-chinese-trade-war-why-now-at.html
As a person who attempts to avoid rhetorical excess, except in my personal life, I've hesitated to refer to the US-China trade disputes as a "trade war." But it's gone past being a skirmish, a tussle, or a melee. It's gone beyond a battle, too. For those trying to gain an overall perspective, a useful starting point is Trade War: The Clash of Economic Systems Threatening Global Prosperity, a readable e-book of 11 essays plus and introduction, edited by Meredith Crowley (VoxEU.org, CEPR Press, May 2019, available with free registration).Here, I want to pass along some of the arguments as to why the US-China trade war has erupted, and what the costs are likely to be. For economists looking at trade issues, the Trump presidency is certainly part of what's happening, but it is also operating against a particular economic and institutional backdrop that is worth noticing.  Thus, here are four reasons that have helped lead to teh US-China trade war.1) The "China shock" of 2001China entered the World Trade Organization in 2001. As Justin R. Pierce and Peter K. Schott point out in their essay, "The costs of US trade  liberalisation with China have been acute for some workers," the US also adopted "permanent normal trade relations" with China at the tail end of the Clinton administration in October 2000. Before this change, tariffs on imports from China were low, but these low tariffs needed to be explicitly re-approved by the president on an annual basis, and Congress had power to override the president's decision. With these changes, the low tariff rates on imports from China were locked in.An extraordinary rise in China's exports and trade surplus followed--a rise that was not anticipated by either China (in its official five-year plans) or by the US. Here are a couple of figures based on World Bank data to illustrate. The first one shows that China's exports of goods and services as a share of GDP had been rising in the 1980s and 1990s, but then absolutely took off in the early 2000s, rising from about 20% of China's GDP in 2001 to 34% of China's GDP in 2006. Not coincidentally, China's trade surplus had been about 1.3% of GDP in 2001, but spiked up to 10% of China's GDP by 2006. 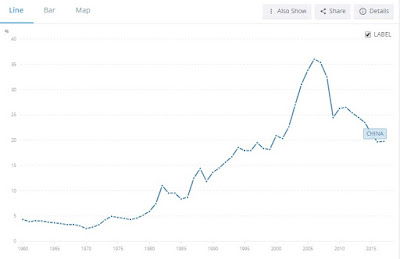 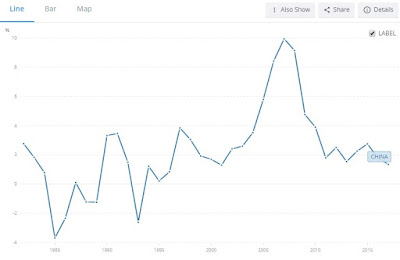 As Pierce and Schott emphasize, the China shock hit manufacturing jobs in certain parts of the US specially hard. They write:

The figures above also show that the "China shock" dramatically diminished about a decade ago, since the end of the Great Recession. A few years ago, China's exports and trade surplus had already fallen back to where they were around 2001. But the legacy of that shock has lived on in the communities most affected.2) The Dominance of the US Economy has DeclinedThe United States, together with the countries of western Europe, have long been at the forefront of the push for reducing global barriers to trade. However, the primary source of economic growth in the world economy in the 21st century, and looking ahead for the next several decades, is happening in the "emerging market" economies. In "Understanding trade wars," Aaditya Mattoo and Robert W. Staiger write that when a single economy dominates the global economy, it can be in the interest of that large single economy to have a rules-based trading system for all countries. But if that large economy loses its dominance, it may prefer to shift to a "power-based" system of negotiating tariffs with specific trading partners. They write:

In 1947, the US was the unquestioned hegemon of the world economy and played a central role in the creation of the GATT (Irwin et al. 2011). Below we describe how it can be in the enlightened self-interest of a sufficiently dominant hegemon to provide support for a rules-based system that limits its ability to exercise power; but as the dominance of the hegemon wanes, this support can erode, precipitating the collapse of the rules-based system until another sufficiently dominant hegemon rises to take its place.