An Overview of Social Science Research on Terrorism [feedly]

I very much like Tim Taylor's (and Dan Little's in sociology) approach of summarizing the scientific lit in a field  of study BEFORE/WHILE evaluating various speculations on the meaning of accumulated data. So, I feel armed to ask a speculative question:

Terrorism attacks the stability of existing institutions and social contracts no matter its politics (or religion -- politics by another name). Or is the situation the inverse? Failing institutions and social contracts invite destruction, whether "creative", or not. Modern states, especially ones  with large armies, AND complex market economies, and which fall into a cycle of failure and collapse, do so very unevenly, and chaotically. Reactions become extreme and existential in locales long before an entire nation falls apart. Is terrorism an inevitable feature of a modern state in collapse?
An Overview of Social Science Research on Terrorism
http://conversableeconomist.blogspot.com/2019/06/an-overview-of-social-science-research.html
Since the terrorist attacks of 9/11, a number of economists and other social scientists have been studying terrorism. Khusrav Gaibulloev and Todd Sandler summarize the findings in a review article written for the Journal of Economic Literature (June 2019, pp. 275-328, not freely available online, but many readers should have access via subscriptions through their library).  Here, I'll hit some high spots of their five main themes, and I'll skip the citations, but the paper itself has vastly more detail."First, terrorism has altered in form after the rising dominance of religious fundamentalist terrorism in the 1990s and the augmented security measures in the West after 9/11. These considerations have changed the lethality, location, and nature of terrorism over time ..."Examples include a shift in the nature of groups most likely to engaged in terrorist activities, along with a decline in transnational and a rise in domestic terrorism. 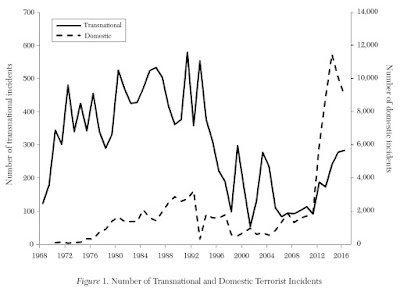