My reaction to this is to find Ben Friedman's The Moral Consequences of Economic Growth ASAP and read it. Based on this report (in the context of the UK/EU Brexit Crisis) it confirms a key feature of Karl Marx's philosophical approach to economics. Namely, that objective is primary to subjective, that the development of capitalism -- the circulation of commodities and capital -- is AN OBJECTIVE  FORCE, not unlike the wind, or the flow of a river. Why is this of interest? (I am not appealing to Marx as an 'authority'). However, when a billionaire chooses a billion $$ investment path that creates serious harm to others, is it the evil character of the billionaire that is responsible, or is it the force of the billion in capital (which is born in commercial growth and reproduces itself via growth) that wants profitable deployment and accepts no excuses?   Is it bad billionaires--the subjective interpretation, or is capitalism failing? And if the latter, how serious a failure? (Feudalism "failed" for a thousand years, and it still hasn't completely disappeared-- there remain 26 monarchies.

The data is showing that the latter philosophical stance is a more serious guide to the connections between progress toward a progressive society and the boundaries imposed by capitalism in its current development..

An ancient Vietnamese proverb via Ho Chi Minh, and Jackson Browne, may encapsulate the answer: THE HAMMER SHAPES THE HAND.
The irrelevant Independent Group
https://stumblingandmumbling.typepad.com/stumbling_and_mumbling/2019/02/the-irrelevant-independent-group.html

The Independent Group claims to value an "open, tolerant and respectful democratic society" and to oppose Brexit. It wills the ends, but not the means. It fails to see that Brexit and intolerance are the product of economic conditions, and is silent on what to do about those conditions. It looks therefore like a bunch of narcissists complaining that people are not like them whilst offering no real solutions.

As I've said many times, the key to understanding politics today is Ben Friedman's book, The Moral Consequences of Economic Growth, published in 2005. He shows that economic growth begets liberal attitudes and that stagnation breeds intolerance. Subsequent events vindicate him perfectly. As Thiemo Fetzer has shown, pro-Brexit attitudes are "strongly and causally associated with an individual's or an area's exposure to austerity." In a separate vein, Nick Crafts has blamed Brexit upon the banking crisis. 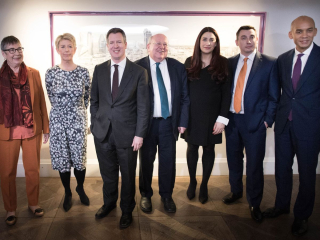 In this sense, economic stagnation is the cause of Brexit and of the turn away from the liberal values the IG claims to espouse. And this stagnation is still with us. Only today the ONS reported that productivity fell last year: this means it has risen only 0.2% a year since 2007 compared to 2.3% per year in the thirty years before then. Because of this, real wages are still below their pre-crisis peak.

The IG, however, is silent about this. Its statement (pdf) makes no mention of austerity or stagnation. In fact, pretty much its only substantive reference to the economy is to government's "responsibility to ensure the sound stewardship of taxpayer's money", which doesn't inspire hope of a firm rejection of austerity.

Now, you might reply that it's unreasonable to expect a new political grouping to have detailed policies. True enough. The problem with the IG, though, isn't that it doesn't have solutions: it's that it doesn't even see a problem. There's a good debate to be had about how far capitalist stagnation can be fixed by fiscal and monetary policy alone, and how far it needs institutional change too. The IG shows no sign of entering this debate, though.

At least one of its members has form here. Last year Chris Leslie wrote a paper, Centre Ground (pdf), which also largely ignored the financial crisis. I criticizedhim then for failing to see that the crisis necessitated a rethinking of the relationship between the state and the private sector. He shows no sign of learning this lesson: his claim to believe in "evidence-based" policy-making is a sign of astounding lack of self-awareness.

Herein, for me, lies the great virtue of Corbyn (perhaps his only virtue). He at least sees the problem, that the economy is broken and that the Left needs new policies for new times – just as Blair saw this a generation ago. The IG, by contrast, is stuck in a 1990s timewarp, unaware that the world has changed.

Granted, Corbyn might be right in the same way that a stopped clock is sometimes right. For me, this is unimportant. What matters is that we have something like the right policy ideas for our changed economic times. I can't say how much the IG will affect politics. But I do know that whilst they have no awareness of our economic problem, they will be an intellectual irrelevance.

-- via my feedly newsfeed
Posted by The Red Caboose at 6:42 AM