In defence of conservative Marxism [feedly]

James Bloodworth complains that the hard left is "deeply conservative" and opposed to regime change. I don't want to address his specific argument – I've no aptitude for armchair foreign policy – but I do want to stand up for a conservative form of Marxism. 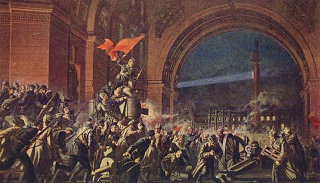 Opponents of Marxism tend to think of revolution as a sudden violent change – a replay of the storming of the Winter Palace. Most Marxists, and certainly not me, don't think this way. Just as the transition from feudalism to capitalism was a lengthy process – and certainly not one caused by serfs protesting the unfairness of feudalism – so too will be the transition to capitalism. As Paul Mason has said:

Capitalism, it turns out, will not be abolished by forced-march techniques. It will be abolished by creating something more dynamic that exists, at first, almost unseen within the old system, but which will break through, reshaping the economy around new values and behaviours.

Some call this accelerationism, others call it interstitial transformation (pdf).

Transformation to what? Marx, famously, was vague. He rejected the idea that socialism could be designed as an abstract blueprint and then imposed upon society*. In 1843 he wrote:

We do not anticipate the world with our dogmas but instead attempt to discover the new world through the critique of the old…If we have no business with the construction of the future or with organizing it for all time, there can still be no doubt about the task confronting us at present: the ruthless criticism of the existing order, ruthless in that it will shrink neither from its own discoveries, nor from conflict with the powers that be.

Experience has taught us that Marx was right. A big reason for this lies in a key insight of conservatism – that our rationality and knowledge are bounded and that there are therefore tight limits to what top-down designers can achieve. This government is making a mess of Brexit and Universal Credit. And whilst a socialist government might contain more able people than Duncan Smith or Davis its task will be much greater. We need, therefore, something more than a centralized dogmatic construction of the future.

Instead, the shift to socialism will be much like the process of capitalist evolution – a process of trial and error. As Erik Olin Wright said:

What can be worked out are the core organizing principles of alternatives to existing institutions, the principles that would guide the pragmatic trial-and-error task of institution-building. Of course, there will be unintended consequences of various sorts, but these can be dealt with as they arrive "after the revolution." The crucial point is that unintended consequences need not pose a fatal threat to the emancipatory projects themselves.

Socialistic institutions and policies that work can be expanded, so that they eventually supplant capitalism. For example, tweaks to Universal Credit such as less conditionality and more generosity could transform it into a basic income; worker directors and a say on CEO pay might inspire workers to demand greater control at work; changes to procurement policy can be used to encourage coops; a national investment bank might lead to a greater socialization of investment; and so on. And various bottom-up non-capitalistic initiatives – be they farmers' markets, community self-help initiatives, micro businesses or coops – would be encouraged by a leftist government. To take a couple of local examples (and all examples would be local), Vaughan College and plans to create a park along Oakham canal are socialistic projects.

It's in this context that I'm sympathetic to demands for things such as full employment policies or high top taxes. I regard these as transitional demands – reasonable requests which might be incompatible with capitalism. And if or when the two are seem to come into conflict, we should ask how we might transform capitalism so as to remove its barriers to efficiency, justice and liberty.

So, for example, if (which isn't very likely) high top tax rates cause a loss of government revenue, we might simply print money to cover the loss: one virtue of MMT is that it reminds us that we don't need the tax revenue of the rich. And if such taxes cause bosses and financiers to quit, we can ask how to reorganize production to be less dependent upon rent-seekers.

Similarly, if full employment policies such as a job guarantee lead to a profit squeeze and falling investment, we might ask how to circumvent this by socializing investment or by using coops (pdf), perhaps in a Meade (pdf)-Weitzman (pdf), style to overcome the tendency for rising wages to squeeze profits and hence depress employment.

Now, I have of course been vague here. But that's necessary. Socialism isn't about imposing a design upon the economy. It's about figuring out – in light of unforeseeable future conditions - what policies and institutions are best compatible with socialistic ideals. In this sense, Marxism is simply good orthodox policy-making – with the crucial difference that unlike orthodox policy-makers we do not assume unquestioningly that capitalism is inevitable or desirable. We Marxists are perhaps more conservative than Brexiters.

* The policies he proposed in the Communist Manifesto were social democratic ones, which were to a large extent enacted by 20th century governments.

-- via my feedly newsfeed
Posted by The Red Caboose at 1:36 PM