Stiglitz: Trump and the damage done

Trump and the damage done

ONE OF Donald Trump's slogans is "Make America Great Again." The irony is that probably never before has a presidential candidate done so much damage — damage that will be hard to repair even if he is not elected.

In a democracy, each elected government has the intrinsic right to change policy; each president has the right to try to persuade Congress to support his priorities. Thus, in a democracy, a "commitment" is always temporary, but the credibility of a country and its government is based on confidence that there will be sufficient continuity among successive governments. Historically, in the United States, foreign policy has been largely bipartisan. At its base, such continuity is based on the premise that there is a broad social consensus. Governments seek to achieve political sustainability of the policies that they enact by working to achieve broad support, often through compromise and cooperation among all elements of society.

Regrettably, the Republican right has sought to polarize the United States. They enacted, sometimes with support of conservative and center-left Democrats, policies that led to the "great divide" between the rich and poor in the United States — to the point where median income, adjusted for inflation, of a full-time male worker is lower than 40 years ago, the hourly wage at the bottom comparable to levels 60 years ago. It is not a surprise that there are many angry people who see the economy not working for them.

Trump has exploited this great divide, announcing a striking change in US policies toward others. Trade agreements will be broken, so too will NATO agreements. Everything is to be renegotiated — even the US debt. Trump, in his own dealings, never seemed to have believed that a man's word was his honor. A contract, a promise to pay, was just the beginning of a negotiation.

Unless Trump is ignominiously defeated, with something like the landslide that defeated Barry Goldwater, the fact that Trump has done as well as he has — that he has received the nomination of one the two major parties, the Grand Old Party — puts all countries on notice: Next time, someone as or more extreme may be elected, someone even less committed (if that is possible) to honor old agreements. 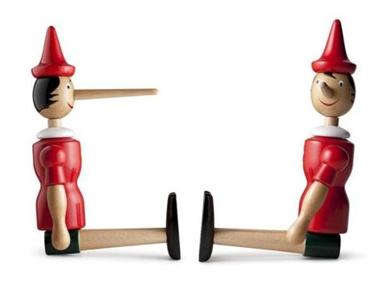 If the battle for the White House comes down to truthfulness, Trump has a chance. Why give it to him?

Whether Trump likes it or not, the world has become highly interdependent. No country can solve the problems it faces — let alone the problems the world faces — on its own. Whether the United States likes it or not, it will be affected by global warming and climate change; there will be huge economic and social costs associated with weather variability. Terrorism is a global threat. Diseases move across borders, whatever Trump's oratory. The United States is dependent on imports from other countries for many raw materials that do not exist within its borders. The United States requires cooperation with others for the stability of the global financial system and to enforce the global system of intellectual property.

But with such interdependence, there is a need for global cooperation. Such cooperation can't exist if there isn't a basic element of trust and confidence in one another. Trump has issued a strong warning to all other countries: You can't trust me or any agreement I make. And Trump's success — with the support of even seemingly "reasonable" Republicans, like Paul Ryan — has demonstrated that the problem is not just Trump. It is a problem with America. Others are asking, "Can America be trusted? Is its word its honor?" Trump has given a triumphant answer of American exceptionalism. He has said no.

Some might say: Hasn't the United States (like other countries) always acted in its own interests? Isn't Trump simply speaking honestly, something admittedly unusual in the world of global diplomacy?

This misses the critical issue: Yes, countries should act in their own long-term interest, but that requires trust and cooperation among countries. In ordinary business, cheating, lying, breaking one's word, reneging on contracts, defaulting on loans might be good in the short run, but a businessman who engages in such policies will lose the respect of others — at least those who value honesty and trust, who will not want to deal with such a person. So, too, for countries. While the United States has not always been an exemplar of good behavior, never before has anyone in a responsible position suggested that we would renege on our debt. The United States has been a strong supporter of the international rule of law. We may not always fully live up to our agreements, but we typically do. Countries that violate the rule of law face the risk of sanctions. The enforcement of the international rule of law may be imperfect, but it is better than having no rule of law.

We need the cooperation of others. Trump's success has raised the question: Can the United States be trusted in the long run? Trump has already done enormous damage to America's reputation. The only way that the US can ameliorate this damage is for its voters to overwhelmingly repudiate Trumpism.

Joseph E. Stiglitz is a Nobel laureate in economics, university professor at Columbia University, and chief economist of the Roosevelt Institute. He is author of "Rewriting the Rules of the American Economy'' and "The Great Divide."
John Case
Harpers Ferry, WV
The Winners and Losers Radio Show
7-9 AM Weekdays, WSHC-Listen Live, Shepherd University
Sign UP HERE to get the Weekly Program Notes.
Check out Socialist Economics.
Posted by The Red Caboose at 7:17 AM