The U.S. Department of Labor (DOL) released the most recent unemployment insurance (UI) claims data yesterday, showing that another 1.5 million people filed for regular UI benefits last week (not seasonally adjusted) and 0.7 million for Pandemic Unemployment Assistance (PUA), the new program for workers who aren't eligible for regular UI, such as gig workers. As we look at the aggregate measures of economic harm, it is important to remember that this recession is deepening racial inequalities. Black communities are suffering more from this pandemic—both physically and economically—as a result of, and in addition to, systemic racism and violence. Both Black and Hispanic workers are more likely than white workers to be worried about exposure to coronavirus at work and bringing it home to their families. These communities, and Black women in particular, should be centered in policy solutions.

As of last week, more than one in five people in the workforce are either receiving or have recently applied for unemployment benefits—regular or PUA. These benefits are a critical lifeline that help workers make ends meet while practicing the necessary social distancing to stop the spread of coronavirus. In fact, the $600 increase in weekly UI benefits was likely the most effective measure in the CARES Act for insulating workers from economic harm and jumpstarting an eventual economic rebound, and it should be extended past July.

To be clear, our top priority right now should be protecting the health and safety of workers and our broader communities. To accomplish this, we should be paying workers to stay home when possible, whether that means working from home some or all of the time, using paid leave, or claiming UI benefits. When workers are providing absolutely essential services, they must have access to adequate personal protective equipment (PPE) and paid sick leave.

Figure A and Table 1 show the total number of workers who either made it through at least the first round of regular state UI processing as of June 13 (these are known as "continued" claims) or filed initial regular UI claims during the week of June 20. Four states had more than one million workers either receiving regular UI benefits or waiting for their claim to be approved: California (3.1 million), New York (1.8 million), Texas (1.3 million), and Florida (1.1 million). Nineteen additional states had more than a quarter million workers receiving or awaiting benefits.

While the largest U.S. states unsurprisingly have the highest numbers of UI claimants, some smaller states have larger shares of the workforce filing for unemployment. Figure A and Table 1 also show the numbers of workers in each state who are receiving or waiting for regular UI benefits as a share of the February 2020 labor force. We use February as a baseline since it predates the effects of the pandemic on the labor market. In nine states and the District of Columbia, more than one in seven workers are receiving regular UI benefits or waiting on their claim to be approved: Hawaii (21.0%), Nevada (19.3%), Oregon (19.0%), New York (18.3%), District of Columbia (17.9%), California (15.9%), Massachusetts (15.4%), Georgia (15.3%), Louisiana (15.0%), and Alaska (14.8%). 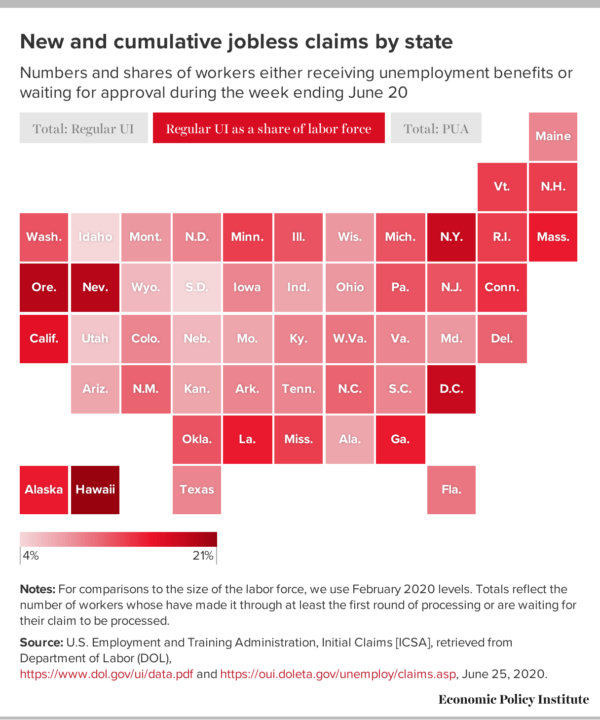 Figure A and Table 2 show the total number of workers who either made it through at least the first round of PUA processing—the new federal program that extends unemployment compensation to workers who are not eligible for regular UI but are out of work due to the pandemic—by June 6 or filed initial PUA claims during the weeks of June 13 or June 20. We do not sum the PUA claims with regular UI claims because some states have misreported PUA claims in their initial claims data, leading to potential double counting.1

As of last week, DOL reported that over 12 million workers across 46 states and the District of Columbia are receiving or waiting on a decision for PUA benefits, which underscores the importance of extending benefits to those who would otherwise not have been eligible. Five states have at least a million workers in this category: Arizona (1.6 million), California (1.5 million), Pennsylvania (1.4 million), Michigan (1.1 million), and New York (1.1 million). Four states still have not reported any PUA claims: Florida, Georgia, New Hampshire, and West Virginia.

To mitigate the economic harm to workers, Congress should pass another federal relief and recovery package that includes worker protections, investments in our democracy, resources for coronavirus testing and contact tracing (which is necessary to reopen the economy), and an extension of the across-the-board $600 increase in weekly unemployment benefits well past its expiration at the end of July.

The package should also include substantial aid to state and local governments, so that they can invest in the services that will allow the economy to recover, particularly public health and education. Without this aid, a prolonged depression is inevitable and 5.3 million workers would likely lose their jobs by the end of 2021, especially if state and local governments make the same budget and employmentcuts that slowed the recovery after the Great Recession. At the same time, policymakers should prioritize long-overdue overhauls of federal labor law and continue to strengthen wage standards that protect workers and help boost consumer demand.

1. Unless otherwise noted, the numbers in this blog post are the ones reported by the U.S. Department of Labor (DOL), which they receive from the state agencies that administer UI. While DOL is asking states to report regular UI claims and PUA claims separately, many states are also including some or all PUA claimants in their reported regular UI claims. As state agencies work to get these new programs up and running, there will likely continue to be some misreporting. Since the number of UI claims is one of the most up-to-date measures of labor market weakness and access to benefits, we will still be analyzing it each week as reported by DOL, but we ask that you keep these caveats in mind when interpreting the data.

-- via my feedly newsfeed
Posted by The Red Caboose at 6:26 AM