Sherry Linkon and her cooperative do fascinating research into working class culture
Precarity Goes to the Movies
https://workingclassstudies.wordpress.com/2020/02/24/precarity-goes-to-the-movies/

Two recent events, vastly different in scale and importance, nonetheless point to the importance of the concept of the precariat, a relatively new coinage for the class of exploited, underemployed and temp workers of the world. The Oscars' celebration of the South Korean film Parasiteforegrounded what even mainstream critics in the New York Times and the Washington Post called a "class war" between the comfortable rich in glossy mansions and the precariat, a miserable underclass who live in Seoul's gross banjiha or semi-basements.

The other event, the pandemic of the latest coronavirus COVID-19 that, among other horrors, curtailed the yearly—and only–vacation of hundreds of millions of Chinese migratory workers, who would normally travel home to the countryside from the industrial mega-cities in which they are similarly stuffed in overcrowded living conditions in dormitories and squalid apartments.

The precariat are everywhere, a vast global workforce defined by their transitory and tenuous relationship with employers emboldened by declining union membership numbers and the cost-saving outsourcing of labor by corporations and government entities alike. Guy Standing, former director of the Socio-Economic Program of the United Nations International Labour Organization and the leading chronicler of the precariat, examines how their lives are marked by the lack of health and safety regulations, job training, and stable income. As he argues in his 2011 book, The Precariat: The New Dangerous Class, the precariat has replaced the traditional proletariat with "a new mass class … characterized by chronic uncertainly and insecurity." They "consist of millions of people relegated to bits and pieces living, in and out of casual flexible jobs, unable to build an occupational identity." They are "wanted by the global market system" but are not simply a lumpenproletriat or underclass. They are even more vulnerable because they have no collective voice in their workplace and no short- or long-term job protection. 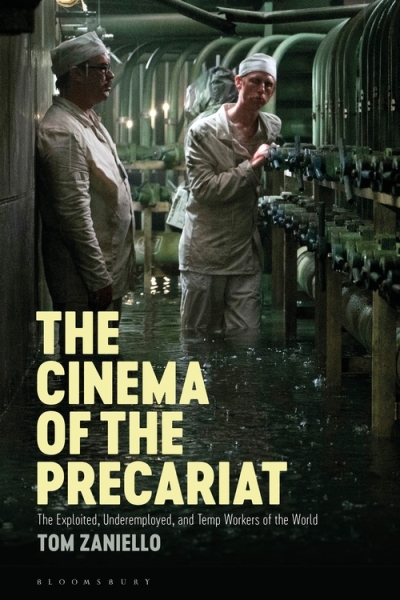 In the last twenty years, I have studied how the precariat are presented in both feature and documentary films. Using a broad definition of cinema, I have explored not only the traditional genres of labor documentaries and working-class feature films, but also other genres especially relevant to precarious work, such as epidemic cinema and films of catastrophe, as well as other forms of artistic expression, such as video games and films made for art installations and political protests by non-traditional filmmakers. I analyze 300 of these texts in my new book, The Cinema of the Precariat: The Exploited, Underemployed, and Temp Workers of the World (Bloomsbury).

When we consider the visual exploration of filmmakers of radically different backgrounds and intentions, we realize that the precariat has not been so invisible after all. Many of us know, for example, the classic television documentary, Harvest of Shame, Edward R. Murrow's pioneering televised exposé of the migrant workers' plight in 1960. That program launched an extended series of television documentaries, from 1960 through the 1990s, that I see as the first series of films about the precariat, though the term had not yet been coined. These films included white, African-American, and Latino migrant workers and farm laborers. At least six major programs, from What Harvest for the Reaper?(1968) through Children of the Harvest (1998), used Murrow's model of investigative journalism to expose the scandalous conditions of this substantial arm of the precariat and their devastating effect on their families.

The closing years of the twentieth century engendered another kind of massive migration in China and other developing countries, as workers both from within and without urban centers tried to survive austerity programs that eliminated economic safety nets. Between 1970 to 2009, as many as 340 million rural workers were crowded into edge cities and satellite factory towns, working upwards of sixteen hours a day for low pay to generate the Chinese economic miracle of economic growth. Numerous films have chronicled these exploited migratory workers. Lixin Fan's Last Train Home (2009), for example, follows a single family on a visit home after working for fifteen years in a garment factory in Guangdong Province only to return to find their factory shuttered because of the 2008 world financial crisis.

Other films document how desperate workers in South American countries had no choice but to move into shanty towns among massive garbage dumps to recycle plastics dumped in ever-increasing mounds of trash. For example, Recycled Life (2006) reveals a forty-acre ravine called the Guatemala City Dump, possibly the largest in the world, where hundreds of scavengers, the guajeros (from guaje or "a thing of little value") recycle millions of pounds of paper, plastic, and metal. In White Train (1993), we see hundreds of cartoneras (the recyclers, literally "the cardboard people") gleaning the trash of Buenos Aires and transporting their finds on unmarked special trains to the recycling centers.

Films about the recycling of discarded plastics and metals from electronic equipment in China and Southeast Asia and ship-breaking in India, Pakistan, and Bangladesh reveal the dangerous and life-threatening tasks the precariat engage in a desperate race to the bottom. Plastic China (2017) focuses on one of five thousand small home factories in the province of Shandong where plastic garbage is transformed into recyclable pellets. On a different and massive scale, workers swarm over discarded ships in select "shipbreaking" ports in the Indian subcontinent, as in Graveyard for Giants (2014). We see Bangladeshi workers suspended hundreds of feet in the air, blowtorching pieces of an old freighter: "Is this a way to live?" one asks the filmmaker.

Looking beyond films that explicitly consider precarious labor, I think we also gain insight on the precariat through film genres and video games that are not so obviously focused on working-class topics. Epidemic cinema has located the spread of diseases among the precariat at least since the 1950s when Elia Kazan's Panic in the Streets (1950) dramatized an outbreak of plague among the precariat and the lumpenproletariat in New Orleans. Much more recently politically-conscious video game makers have been influenced by traditional filmmakers to offer games in which players have to identify with the precariat to survive or "win." In the videogame Fort McMoney (2013), modeled on the fracking boom-town Ft. McMurray, Canada, players "walk" around the town, interview workers, and participate in decisions about the city's future.

The title—and subject matter–of Parasite suggests, like epidemic cinema, that the precariat is a threat to the oligarchy of the 1%, epitomizing the class divide that leaves the 99% struggling for decent pay, health benefits, and job security. The Cinema of the Precariat also devotes separate chapters to the films that demonstrate the 1%'s capitalist drive for profits and economic dominance and that chronicle the rise of alt-labor and the drive to organize the unorganized of the 99%.

While films about the precariat are not new, filmmakers have begun to show the need for new films that will, like Murrow's Harvest of Shame, make the precariat visible in the 21st century. It seems fitting that the documentary Food Chains (2014) returns to Immokalee, Florida, where Murrow began sixty years ago, to document new organizing drives among migrant labor and to take up the fight for workers' rights again.

Tom Zaniello is a film and media scholar who has written several books on films about work and class, including Working Stiffs, Union Maids, Reds, and Riffraff, The Cinema of Globalization, and The Cinema of the Precariat.

-- via my feedly newsfeed
Posted by The Red Caboose at 5:10 AM