The most recent unemployment insurance (UI) claims data released on Thursday show that another 1.4 million people filed for UI benefits last week. For the past four weeks, workers have gone without the extra $600 in weekly UI benefits—which Senate Republicans allowed to expire—and are instead typically receiving around 40% of their pre-virus earnings. This is far too meager to sustain workers and their families through lengthy periods of joblessness.

In a largely unserious stunt, the Trump administration has issued an executive order that, at best, will slash the benefit in half to $300. On its own, this cut will cause such a huge drop in spending that it will cost 2.6 million jobs over the next year. In addition to being woefully insufficient, this aid will take many weeks to reach jobless workers, exclude low-wage workers, and only last through September with its current funding. Furthermore, it is distracting from the dire need for Congressional action to strengthen UI benefits.

To give a sense of how many workers the Trump administration and Republicans in Congress are leaving behind, Figure A shows the share of workers in each state who either made it through at least the first round of state UI processing (these are known as "continued" claims) or filed initial UI claims in the following weeks. The map includes separate totals for regular UI and Pandemic Unemployment Assistance (PUA), the new program for workers who aren't eligible for regular UI, such as gig workers.

The map also includes an estimated "grand total," which includes other programs such as Pandemic Emergency Unemployment Compensation (PEUC), Extended Benefits (EB), and Short-Time Compensation (STC). The vast majority of states are reporting that more than one in 10 workers are claiming UI. Ten states and the District of Columbia report that more than one in five of their pre-pandemic labor force is now claiming UI under any of these programs. The components of this total are listed in Table 1.1

Figure A also displays the numbers of workers in each state who are receiving or waiting for regular UI benefits as a share of the pre-pandemic labor force in February 2020. In four states and the District of Columbia, more than one in seven workers are receiving regular UI benefits or waiting on their claim to be approved: Hawaii (18.3%), the District of Columbia (16.4%), California (15.8%), New York (15.8%), and Nevada (14.8%). 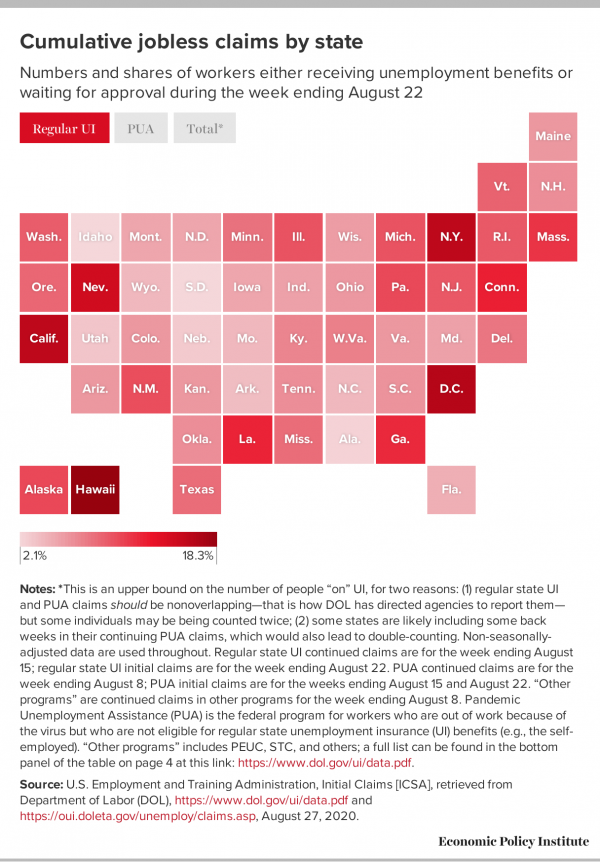 With the pandemic and economic crisis persisting through the summer, workers have been experiencing long-term unemployment. As a result, workers are increasingly relying on PEUC, the 13 additional weeks of benefits available to workers who have exhausted the 26 weeks of regular benefits. However, even the cumulative 39 weeks of benefits have not been enough for some workers, so policymakers should extend the valuable PEUC program. During the week ending August 8, PEUC claims increased by more than 100,000 nationwide, as did claims under the Extend Benefits program, which provides another 13 weeks of benefits to workers (after PEUC is exhausted) in states that meet a threshold of high unemployment. Currently, the requirements for this program have been triggered in every state, meaning that workers who have exhausted PEUC can turn to the Extended Benefits program. There are now 203,188 workers claiming Extended Benefits, the highest number so far this recession.

Where policymakers have failed, workers have demonstrated their power to come together and advocate for the common good, whether they are ensuring that essential workers receive the proper protective equipment or going on strike to protest the police shooting of Jacob Blake. Unions allow workers to better their working conditions and strengthen their collective political voice, but many essential jobs are not unionized and these workers are at an even greater risk. Congress should pass policies that bolster unions in both the public and private sector. And in the long term, they must strengthen the institutions that allow us, collectively, to promote the general welfare, including unemployment insurance, public health insurance, and unions.

1. That total is more of an upper bound, and you should exercise caution when interpreting it for three reasons: (1) It includes initial claims, which represent people who have not yet made it through the first round of processing; (2) Some individuals may be being counted twice. Regular state UI and PUA claims should not be overlapping—that is how the Department of Labor (DOL) has directed state agencies to report them—but some states may be misreporting; (3) Some states are likely including some back weeks in their continuing PUA claims, which would also lead to double counting (the discussion around Figure 3 in this paper covers this issue well). Those limitations are the reason that we have so far hesitated to publish this estimate of total claims by state. DOL has worked to overcome misreporting issues and has had enough success that we are now comfortable enough to report the totals here. However, it is clear that there is still some misreporting. Unless otherwise noted, all numbers are as reported by DOL.

Enjoyed this post? Sign up for the Economic Policy Institute's newsletter so you never miss our research and insights on ways to make the economy work better for everyone.

-- via my feedly newsfeed
Posted by The Red Caboose at 1:04 PM