America's streak of robust job gains is being threatened by a spreading coronavirus that's roiling financial markets and may exact a growing toll on the U.S. economy.

Friday's employment report is projected to show payrolls increased 175,000 in February, below January's pace but in line with the average of the past year, according to a Bloomberg survey of economists. The unemployment rate is seen holding near a 50-year low as wages keep marching higher. 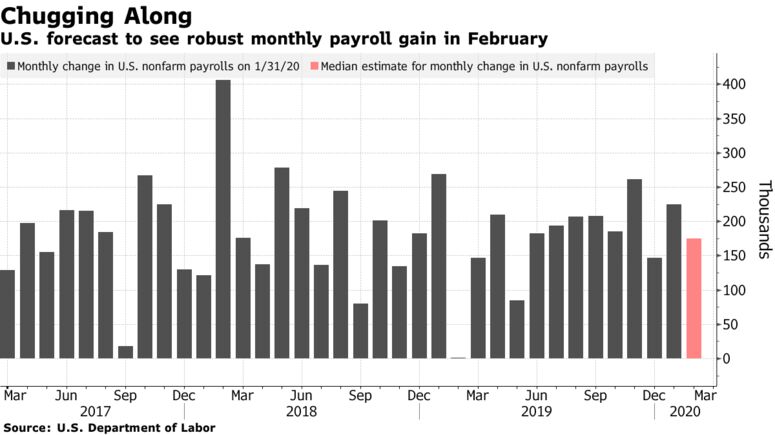 But the February data, and what they say about the labor market's health and momentum, may already be outdated ahead of such a unique economic shock. The Federal Reserve this week cut interest rates half a percentage point in response to the growing outbreak. While the virus probably failed to dent February hiring, America's jobs engine is unlikely to be immune to its effects.

The potential of the virus "to spill over into sectors that are responsible for a lot more of hiring and jobs in this country I think presents an added degree of risk that we haven't seen yet this cycle," said Sarah House, senior economist at Wells Fargo & Co.

Data on Thursday showed no broad impact yet from the virus. Filings for unemployment benefits fell by 3,000 to 216,000 last week, remaining near a half-century low, according to the Labor Department.

Temporary hiring for the 2020 census is likely to inflate the headline number in the coming months, though the effect in February was probably relatively small.

Here are a few ways the coronavirus could filter through future employment reports:

As the coronavirus spreads and the death toll rises, more companies have restricted non-essential business travel, some Americans have canceled personal trips and the U.S. has expanded travel restrictions. Conferences have been postponed, canceled or shifted to "virtual" formats.

The leisure and hospitality sector makes up about 11% of total nonfarm U.S. employment and may be one of the first to show a noticeable impact from the virus.

As historical sites close and events are canceled, coronavirus could dent hiring

These industries are "right in the target in terms of all these cancellations of events in an effort to contain the spread of the virus," Gallagher said.

"The fast breaking nature of the Covid-19 outbreak materially changes the relevance of incoming economic data... The knock to economic growth from the recent market selloff will similarly weigh on the pace of job creation in the near term."

Another sector poised for a sizable hit is transportation and warehousing as travel plans change and supply-chain disruptions alter delivery schedules.

Airline employment may stall or decline amid flight cutbacks, with United Airlines saying Wednesday it's freezing hiring through June 30. Payrolls tumbled following the September 11 attacks and the SARS outbreak as many Americans chose not to fly; employment in the industry has yet to fully recover. 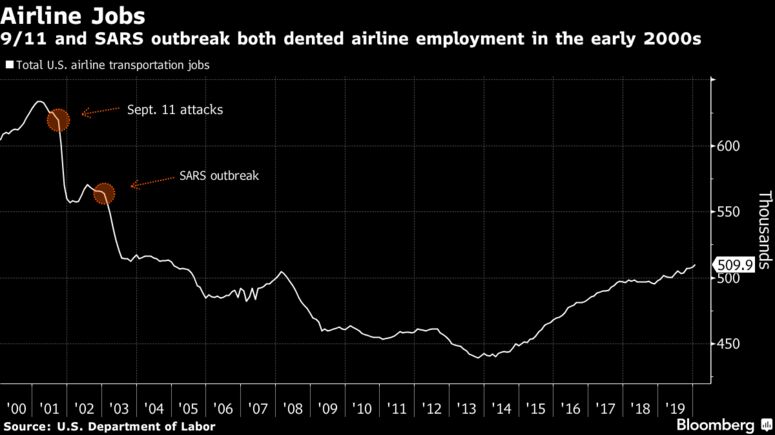 Additionally, the virus has disrupted supply chains and slowed port activity. Cargo traffic through the Port of Los Angeles was down about 25% in February amid canceled ship sailings, according to its executive director.

Caught in the crossfire of trade uncertainty, slowing global demand and Boeing Co.'s 737 Max production halt, manufacturing employment has been anemic during the past year. The February report is forecast to show a third straight decline in factory jobs, and the coronavirus stands to weaken the sector even more. 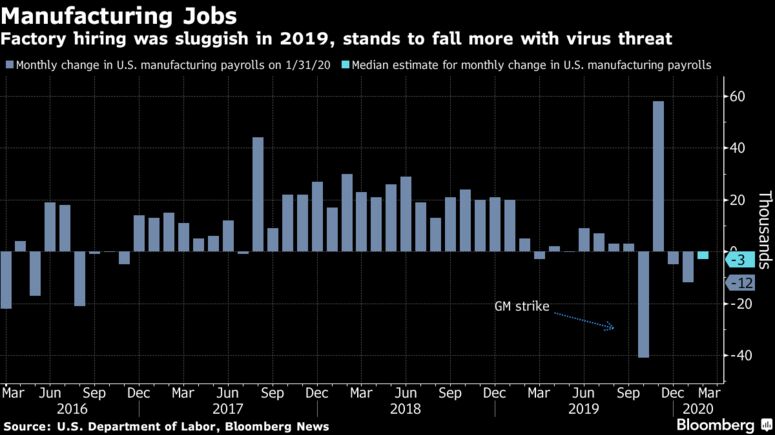 Timothy Fiore, chair of the Institute for Supply Management's manufacturing survey committee, said there were a lot more comments in the group's latest report about actively managing the labor force through layoffs.

As global demand diminishes because of the virus, "staffing levels will have to be managed more likely through layoffs rather than just attrition," Fiore said.

The average workweek also may begin to dip and overtime hours could decline. While working from home shouldn't impact this number, less consumer spending ultimately could. 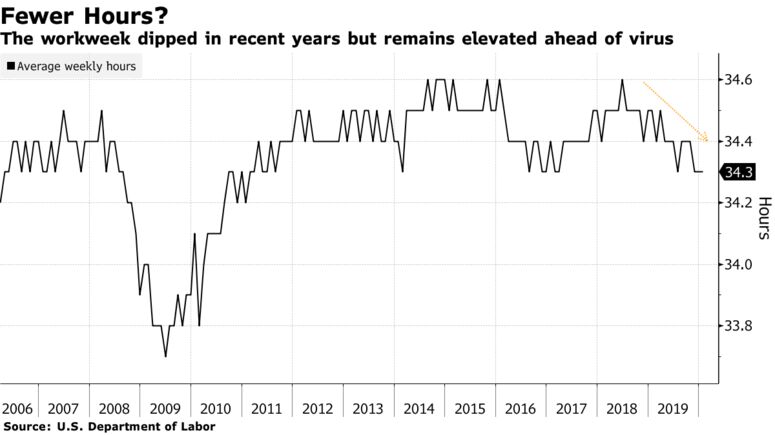 While it may be too soon to forecast what will happen to wage growth from Covid-19, the decline in hours could impact the take-home pay of Americans even if the average hourly wage continues to rise.

Still, there may be some delay "before you see a real decisive change in trend," said Michelle Meyer, head of U.S. economics at Bank of America Corp.

— With assistance by Chris Middleton

-- via my feedly newsfeed
Posted by The Red Caboose at 6:00 AM