Piketty: After the climate denial, the inequality denial [feedly]

amen to this analysis.
After the climate denial, the inequality denial
Thomas Piketty
https://www.lemonde.fr/blog/piketty/2020/01/14/after-the-denial-of-climate-change-the-inequality-denial/ 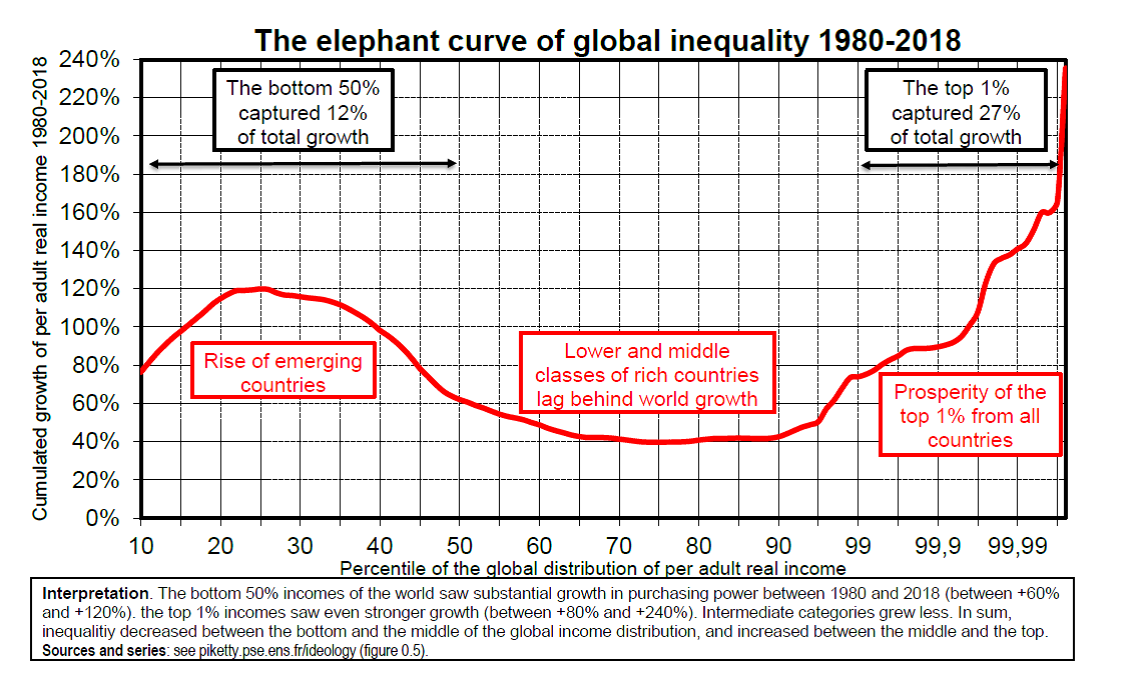 In the wake of the denial of global warming, now on the wane, at least superficially, are we at present witnessing the denial of the rise in inequality?

This is obvious in the case of the French government where all the efforts undertaken since 2017 appear to be guided by the idea that the country is suffering from a surfeit of equality. Hence the tax rewards for the wealthiest when the government came into office; hence similarly its inability to understand the demand for justice expressed in the social movement at the moment. In real terms, a universal retirement pension scheme is possible, but only on condition that everything is done to improve the small and medium pensions, even if this involves increased efforts on the part of the highest salaries and the wealthiest. Those who are at the top of the scale must understand that aging and the end of life mean new challenges in terms of dignity and equality.

More generally speaking, while the demand for justice is expressed in numerous protest mobilisations all over the world, in the media associated with business circles we witness an attempt to relativise the rise in inequality over recent decades. True, nobody expects the weekly publication, The Economist, to be in the lead in a campaign for equality. But this is no reason to manipulate the facts, once they have been established.

It is all the more regrettable because the governments of the rich countries have not made any genuine attempt to promote transparency concerning the distribution of wealth since the crisis in 2008. Given all the declarations on tax havens, the automatic transmission of banking data etc., one would have expected that financial opacity would have decreased. In theory, all countries should now be equipped to collect and publish banking and fiscal data enabling them to follow the development of the distribution of wealth according to the level of income and of wealth, in particular for the top incomes. With the suppression in several countries of progressive-type taxes on wealth and on the income from capital, in several instances (in particular in France, but also equally in Germany, in Sweden or in the United States) we even see a decline in the public data available.

Too frequently, researchers, as do public administrations, find themselves using the rankings published in magazines, data which do indeed indicate the growing prosperity of the wealthiest but which do not fulfil the conditions of transparency and rigour one has the right to expect to inform a reasoned democratic debate on these essential issues. We are supposedly living in the age of "big data".  This is undoubtedly true for the major private monopolies which have the right to unashamedly gain access to our personal data. But as far as public statistics on the distribution of wealth and its necessary redistribution are concerned, in reality we live in an age of considerable opacity which is perpetuated by all those who oppose the reduction of inequalities.

Furthermore we too often forget that we will not be able to resolve environmental challenges unless we make the reduction of inequality central to political action. We must undoubtedly fundamentally rethink the indicators enabling us to measure economic and social progress. To begin with, it is urgent for governments and the media to stop using the concept of 'gross domestic product' (GDP) and concentrate on that of 'national income'. Let me remind you of the two main differences: national income is equal to gross domestic product, minus the incomes which go to foreign countries (or increased by the income entering from foreign countries, depending on the situation of the country), and minus the consumption of capital (which should, in principle, include the consumption of natural capital in all its forms).

To illustrate, let's take a simple example. If 100 billion Euros of hydro-carbons are extracted from the ground (or fish from the seas), then we have an additional 100 billion Euros of GDP (gross domestic product). But as the stock of hydro-carbons (or of fish) has decreased by an equal amount, then national income has not increased by one iota. If, furthermore, the fact of burning the hydro-carbons contributes to making the air unbreathable and the planet uninhabitable then the national income produced in this manner is in reality negative, provided that the social cost of the carbon emissions have been taken into account correctly.

The fact of using national income and national wealth rather than GDP and focussing on distribution and not on averages is not enough to solve all the problems, far from it. It is equally urgent to multiply the indicators specific to climate and the environment (for example, the volume of emissions, the quality of the air or the diversity of the species). But it would be a mistake to imagine that one could conduct the forthcoming debates with these indicators alone, dispensing with any reference to income or wealth. To develop new standards of justice acceptable by the greatest number, it is essential to be able to measure the efforts demanded of various social groups. This requires the ability to be able to compare levels of wealth within a given country as well as between countries and over the course of time. We will not save the environment by consigning all concepts of income or growth to the dustbin.

On the contrary, if ecological parties neglect social issues, they may well, on the contrary, find themselves confined to a privileged electorate and thus enable the maintenance in power of conservatives and nationalists. The challenges of climate change and the rise in inequalities can only be resolved simultaneously. All the more reason, I believe, to combat this dual denial by tackling them with a single voice.

-- via my feedly newsfeed
Posted by The Red Caboose at 8:13 AM