Europeans have long observed from a distance the mix of social and racial conflicts which structure political and electoral cleavages in the United States. Given the growing, and potentially destructive, importance taken by these identity conflicts in France and in Europe, they might do well to consider the lessons to be learned from foreign experiences.

Let's take a step backwards. After having been the party of slavery during the civil war from 1861-1865, in the 1930s the Democratic Party gradually became the party of Roosevelt and the New Deal. As far back as the 1870s, the Democratic Party had begun to reconstruct itself on the basis of an ideology which could be described by as social-differentialist: it was violently inegalitarian and segregationist towards Black Americans, but more egalitarian than the Republicans towards the white population (in particular the new immigrants from Italy and Ireland). The Democrats supported the creation of the federal income tax in 1913 and the development of social insurance after the crisis of 1929. It was not until the 1960s, under the pressure from Black militants, and in a transformed geopolitical context (Cold War, decolonisation), that the Party was to turn its back on its heavy segregationist past and to support the cause of civil rights and racial equality.

From this point on, it was the Republicans who were to gradually get the racist vote or more precisely the vote of those in the White population who considered that the main concern of the federal State and the educated white elites was to ensure that the minorities were given preference. The process began with Nixon in 1968 and Reagan in 1980; it then gained momentum under Trump in 2016 who hardened the identity and nationalist discourse in the wake of the economic failure of Reaganomics and its promises of prosperity. Given the open hostility of the Republicans (the stigmatisation by Reagan of the 'welfare queen', this 'queen of social welfare', presumed to personify the laziness of unmarried black mothers, until the support by Trump for the white supremacists during the riots in Charlottesville), it is not surprising to learn that the vote of the black electorate has been a consistent 90% for the Democrats since the 1960s. 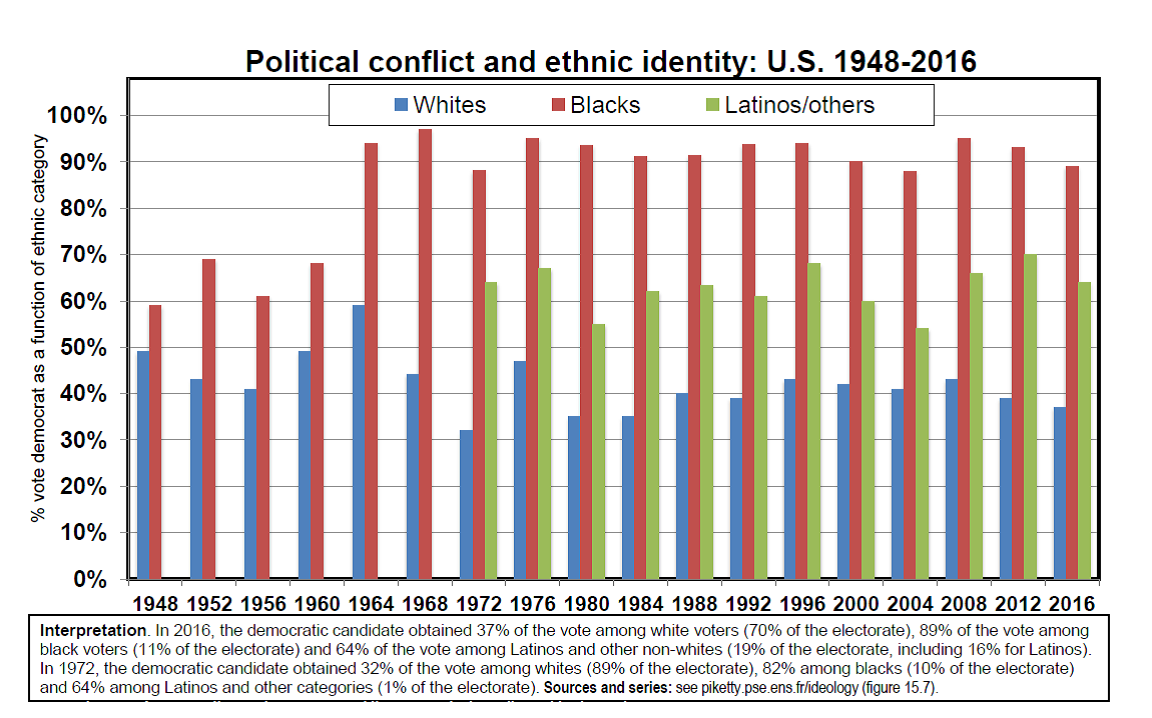 This type of division on the basis of ethnic origin is in the process of being established in Europe. The hostility of the right in matters of extra-European immigration has led voters who originate from these parts of the world to take refuge in the only parties who do not openly reject them (therefore, on the left), which in return leads to right-wing accusations of favouritism towards them on the part of the left. For example, during the second round of the presidential election in 2012, 77% of voters who stated they had at least one grand-parent of extra-European origin (or 9% of the electorate) voted for the socialist candidate, as compared with 49% for the voters of European origin (19% of the electorate) as for those with no stated foreign origin (72% of the electorate). 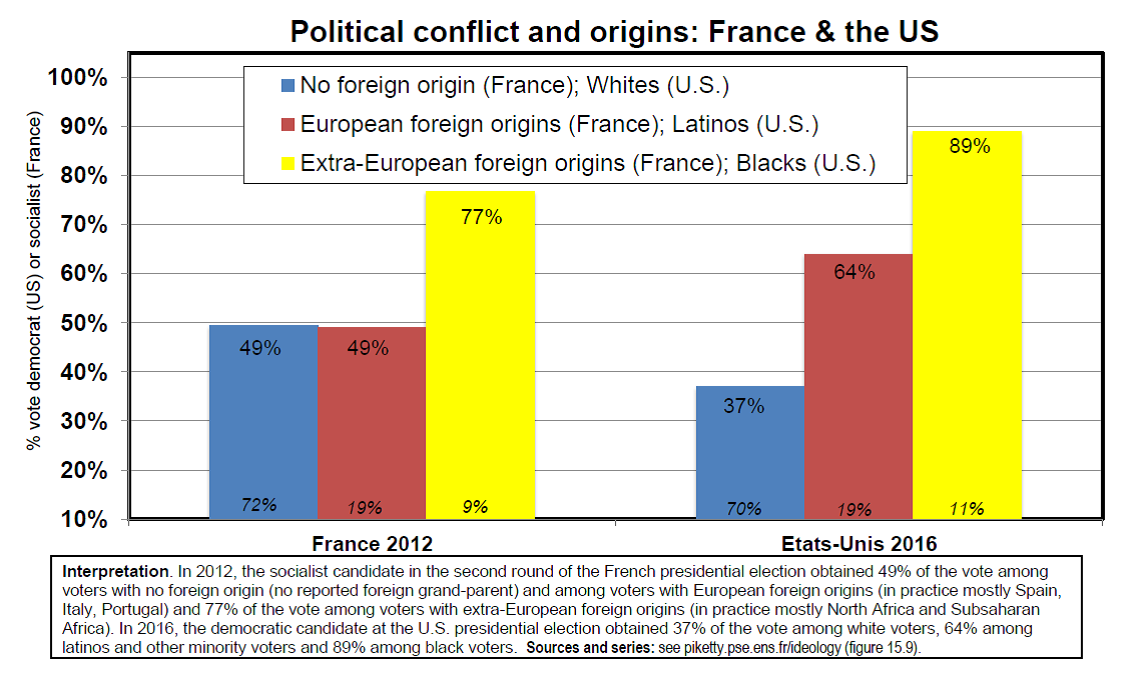 In comparison, in the United States the European 'minorities' are characterised by a much higher percentage of mixed marriages (30% amongst first generation North African immigrants, as compared with little more than 10% for Black Americans), which should alleviate the divisions. Unfortunately the religious dimension and the question of Islam (almost totally absent in the United States) contribute on the contrary to hardening the situation.

From this point of view, the European situation is closer to that of India, where the Hindu Nationalists in the BJP built their ideology on the rejection of the Muslim minority. In India the confrontation of identities concerns the consumption of beef and the vegetarian diet. In France, it focuses on the question of the headscarf and sometimes on the length of skirts and the wearing of leggings on the beach. In both cases we witness a similar anti-Muslim obsession in the ranks of the supporters of Hinduism and the supporters of extremist Secularism and the National Front. This also takes the form of an extremely violent discourse which extends to all those who defend the rights of minorities (who are almost accused of being pro-Jihadi). In both cases the latter sometimes run the risk of exacerbating the conflict, for example by defending the legitimate right to wear a headscarf with more determination than the right not to do so, and not to be subjected to this somewhat retrograde form of pressure. 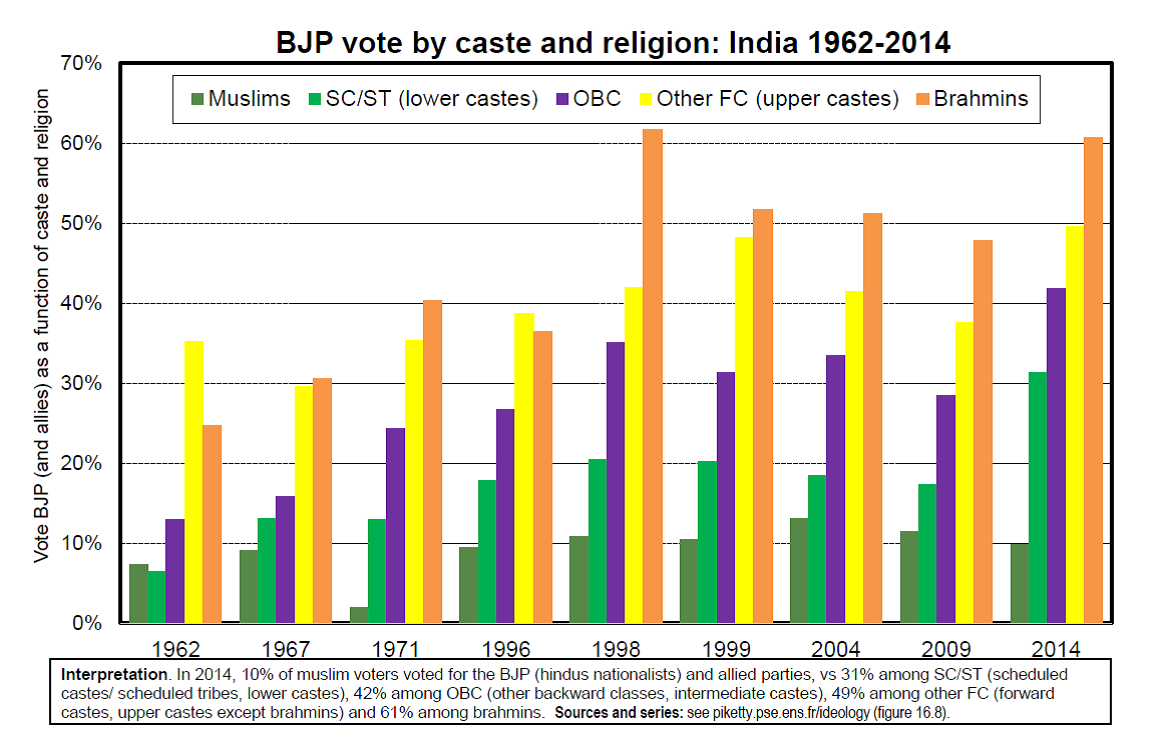 How can we escape this escalation of conflict? First, the discussion should be set in the context of economic justice and the combat against inequality and discrimination. Countless studies have demonstrated that for one and the same diploma, those whose names have an Arabo-Muslim consonance are often not invited to a job interview. It is urgent to set up indicators and sanctions enabling us to monitor the development of these discriminatory practices and get them to evolve.

More generally speaking, it is the absence of any economic discussion which feeds identity-based no-win conflicts. Once we abandon any discussion of an alternative economic policy and we continue to explain that the State no longer controls anything, apart from its frontiers, there is no reason to be surprised that the political discussion focuses on questions of frontiers and identities.

It is time for all those who refuse the clash forecast between identitarian nationalism and elitist globalism to get together and rally around a programme for economic transformation. This involves educational justice, going beyond capitalist ownership and an actual and ambitious project for the renegotiation of the European treaties. If we do not succeed in going beyond these petty squabbles and old hatreds, then hatred reminiscent of fascism may well win the day.