Some Economics of the Clean Water Act [feedly]

Marx once quipped, "if appearance and reality were the same, there would be no need for science"  Tim Taylor is a guy persistently validating that thesis
Some Economics of the Clean Water Act
http://conversableeconomist.blogspot.com/2019/11/some-economics-of-clean-water-act.html
Here's an uncomfortable set of facts about federal clean water policy in the United States: 1) People care about it a lot; 2) Over the years, total spending on clean water has been high; 3) Water quality has improved; and 4) The estimated benefits of clean water regulation in the US seem relatively low and in many cases even negative. My discussion here will draw on an essay by David A. Keiser and Joseph S. Shapiro, "US Water Pollution Regulation over the Past Half Century: Burning Waters to Crystal Springs?" Journal of Economic Perspectives, Fall 2019, 33:4, pp.  51-75.Keiser and Shapiro offer some evidence from Gallup polls that clean water is traditionally near the top of environmental concerns. 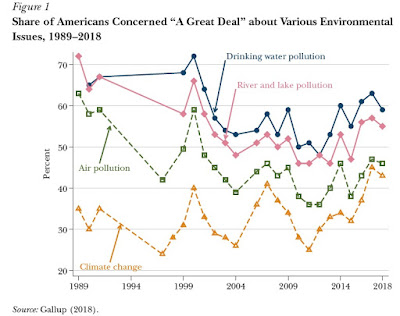 The amount spent on clean water legislation has been substantial. They write:

The quality of water has improved. For example, the share of wastewater and industrial discharge being treated has risen.One common measure is whether the water is "fishable," and the share of water "not fishable" has been declining. 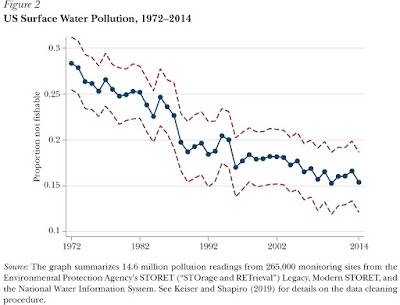 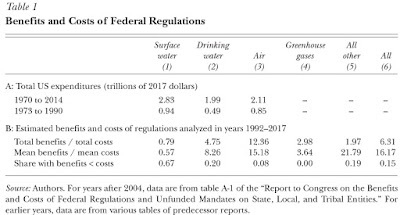 The perhaps startling pattern is that the benefit-cost ratios for surface water rules are typically less than one, meaning that benefits are below costs. For drinking water, the benefit-cost ratios on average exceed one, but it's still true that 20% of the rules have a benefit-cost ratio below one. Rules about air pollution have much better benefit-cost ratios.So what's going on here? Here are some thoughts:1) The rules listed here are often about additions to the earlier rules. Thus, it's possible that earlier rules about protecting surface water and drinking water had better benefit-cost ratios, but now that some of the worse problems have been addressed, the benefit-cost ratios for additional rules are lower.2) For surface water rules, in particular, the "benefits" in these studies rarely involve human health. Reducing illness and saving lives in humans is where the big benefits are. If the benefits are measured as improved recreational opportunities on certain lakes and rivers, the numbers are going to be much lower. In addition, it seems that a number of the studies of benefits of cleaner surface water don't take into account improvements in property values or work conditions from being close to cleaner water.  Benefits like biodiversity from cleaner water may also be underestimated. As Keiser and Shapiro write: "Most existing benefits of surface water quality are believed to come from recreation, but available data on recreation are often geographically limited (for example, one county, state, or lake) and often come from a single cross section. Hence, our subjective perception is that underestimation of benefits is more likely a concern for surface water quality regulation than for other regulations."3) A wide range of evidence has shown that market-based environment regulation--like using cap-and-trade arrangements or pollution taxes--can be a much cheaper way to achieve a given amount of environmental cleanup. However, it's often harder to figure out how to use a system of, say, tradeable pollution permits to clean up surface water. As a result, the costs in these benefit-cost calculations may be higher than necessary. However, use of these more flexible tools in surface water clean-up is rising: for example, there is a Chesapeake Bay Watershed Nutrient Credit Exchange and aMinnesota River Basin Trading market. For a discussion from a few years ago about these issues, a good starting point is Karen Fisher-Vanden and Sheila Olmstead. 2013. "Moving Pollution Trading from Air to Water: Potential, Problems, and Prognosis." Journal of Economic Perspectives, 27 (1): 147-72.4) Even taking the possibilities that reducing water pollution has greater benefits than currently estimated,  and potentially might have lower costs, a general uneasiness that the benefit-cost ratios are lower than other forms of environmental protection remains.There are some big issues about water pollution on the horizon. For example the original clean water laws back in the early 1970s pretty much skipped over agriculture, but in many parts of the country agricultural runoff is the single biggest surface water pollution problem.There's also a big dispute going on over what is meant in the Clean Water Act by the phrase "Waters of the United States." It's clear that this includes rivers and lakes. But what about wetlands, headwater areas that drain into rivers and lakes, or streams that come and go seasonally? As the authors write:

Another challenge involves the language of the Clean Water Act protecting "Waters of the United States," which has led to legal debates over how this term applies to roughly half of US waters, primarily composed of wetlands, headwaters, and intermittent streams. Two Supreme Court decisions held that the Clean Water Act does not protect most of these waters (Rapanos v. United States, 547 US 715 [2006]; Solid Waste Agency of Northern Cook County (SWANCC) v. US Army Corps of Engineers, 531 US 159 [2001]). In 2015, the Obama administration issued the Waters of the United States Rule, which sought to reinstate these protections. However, in 2017, President Trump issued an executive order to rescind or revise this rule. The net benefits of these regulations have also become controversial ...

-- via my feedly newsfeed
Posted by The Red Caboose at 3:12 AM