Meet the Leftish Economist With a New Story About Capitalism [feedly]

In many respects, this controversial economist reconciles (at least in economic theory) the socialisms of Lenin in the NEP period, and Deng Chou Peng in the Chinese renaissance  with advanced social democratic ideas of "interventionism" on behalf of innovation by the state in Prof. Mazzucato's work (Wiki ref:  https://en.wikipedia.org/wiki/Mariana_Mazzucato#Awards_and_nominations   ). The focus on the public roles of development and supply side stimulus and investments  is very Schumpeter and Marx like.

Meet the Leftish Economist With a New Story About Capitalism
https://www.nytimes.com/2019/11/26/business/mariana-mazzucato.html

Mariana Mazzucato was freezing. Outside, it was a humid late-September day in Manhattan, but inside — in a Columbia University conference space full of scientists, academics and businesspeople advising the United Nations on sustainability — the air conditioning was on full blast.

For a room full of experts discussing the world's most urgent social and environmental problems, this was not just uncomfortable but off-message. Whatever their dress — suit, sari, head scarf — people looked huddled and hunkered down. At a break, Dr. Mazzucato dispatched an assistant to get the A.C. turned off. How will we change anything, she wondered aloud, "if we don't rebel in the everyday?"

Dr. Mazzucato, an economist based at University College London, is trying to change something fundamental: the way society thinks about economic value. While many of her colleagues have been scolding capitalism lately, she has been reimagining its basic premises. Where does growth come from? What is the source of innovation? How can the state and private sector work together to create the dynamic economies we want? She asks questions about capitalism we long ago stopped asking. Her answers might rise to the most difficult challenges of our time.

In two books of modern political economic theory — "The Entrepreneurial State" (2013) and "The Value of Everything" (2018) — Dr. Mazzucato argues against the long-accepted binary of an agile private sector and a lumbering, inefficient state. Citing markets and technologies like the internet, the iPhone and clean energy — all of which were funded at crucial stages by public dollars — she says the state has been an underappreciated driver of growth and innovation. "Personally, I think the left is losing around the world," she said in an interview, "because they focus too much on redistribution and not enough on the creation of wealth."

Catch up and prep for the week ahead with this newsletter of the most important business insights, delivered Sundays.

Her message has appealed to an array of American politicians. Senator Elizabeth Warren, Democrat of Massachusetts and a presidential contender, has incorporated Dr. Mazzucato's thinking into several policy rollouts, including one that would use "federal R & D to create domestic jobs and sustainable investments in the future" and another that would authorize the government to receive a return on its investments in the pharmaceutical industry. Dr. Mazzucato has also consulted with Representative Alexandria Ocasio-Cortez, Democrat of New York, and her team on the ways a more active industrial policy might catalyze a Green New Deal. 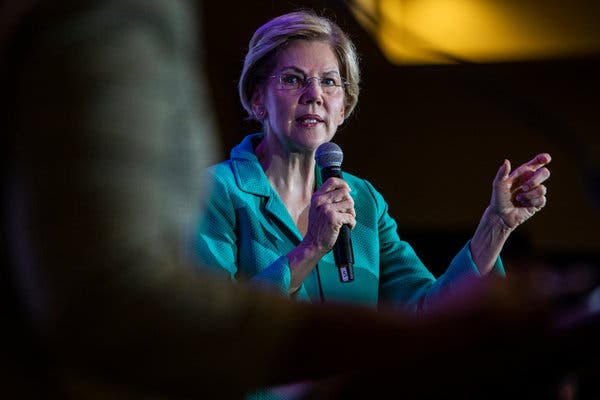 Even Republicans have found something to like. In May, Senator Marco Rubio of Florida credited Dr. Mazzucato's work several times in "American Investment in the 21st Century," his proposal to jump-start economic growth. "We need to build an economy that can see past the pressure to understand value-creation in narrow and short-run financial terms," he wrote in the introduction, "and instead envision a future worth investing in for the long-term."

Formally, the United Nations event in September was a meeting of the leadership council of the Sustainable Development Solutions Network, or S.D.S.N. It's a body of about 90 experts who advise on topics like gender equality, poverty and global warming. Most of the attendees had specific technical expertise — Dr. Mazzucato greeted a contact at one point with, "You're the ocean guy!" — but she offers something both broad and scarce: a compelling new story about how to create a desirable future.

Originally from Italy — her family left when she was 5 — Dr. Mazzucato is the daughter of a Princeton nuclear physicist and a stay-at-home mother who couldn't speak English when she moved to the United States. She got her Ph.D. in 1999 from the New School for Social Research and began working on "The Entrepreneurial State" after the 2008 financial crisis. Governments across Europe began to institute austerity policies in the name of fostering innovation — a rationale she found not only dubious but economically destructive.

"There's a whole neoliberal agenda," she said, referencing the received free-market wisdom that cutting public budgets spurs economic growth. "And then the way that traditional theory has fomented it or not contested it — there's been kind of a strange symbiosis between mainstream economic thinking and stupid policies."

Dr. Mazzucato takes issue with many of the tenets of the neoclassical economic theory taught in most academic departments: its assumption that the forces of supply and demand lead to market equilibrium, its equation of price with value and — perhaps most of all — its relegation of the state to the investor of last resort, tasked with fixing market failure. She has originated and popularized the description of the state as an "investor of first resort," envisioning new markets and providing long-term, or "patient," capital at early stages of development.

In important ways, Dr. Mazzucato's work resembles that of a literary critic or rhetorician as much as an economist. She has written of waging what the historian Tony Judt called a "discursive battle," and scrutinizes descriptive terms — words like "fix" or "spend" as opposed to "create" and "invest" — that have been used to undermine the state's appeal as a dynamic economic actor. "If we continue to depict the state as only a facilitator and administrator, and tell it to stop dreaming," she writes, "in the end that is what we get."

As a charismatic figure in a contentious field that does not generate many stars — she was recently profiled in Wired magazine's United Kingdom edition — Dr. Mazzucato has her critics. She is a regular guest on nightly news shows in Britain, where she is pitted against proponents of Brexit or skeptics of a market-savvy state.

Alberto Mingardi, an adjunct scholar at the libertarian Cato Institute and director general of Istituto Bruno Leoni, a free-market think tank, has repeatedly criticized Dr. Mazzucato for, in his view, cherry-picking her case studies, underestimating economic trade-offs and defining industrial policy too broadly. In January, in an academic piece written with one of his Cato colleagues, Terence Kealey, he called her "the world's greatest exponent today of public prodigality."

Her ideas, though, are finding a receptive audience around the world. In the United Kingdom, Dr. Mazzucato's work has influenced Jeremy Corbyn, leader of the Labour Party, and Theresa May, a former Prime Minister, and she has counseled the Scottish leader Nicola Sturgeon on designing and putting in place a national investment bank. She also advises government entities in Germany, South Africa and elsewhere. "In getting my hands dirty," she said, "I learn and I bring it back to the theory." 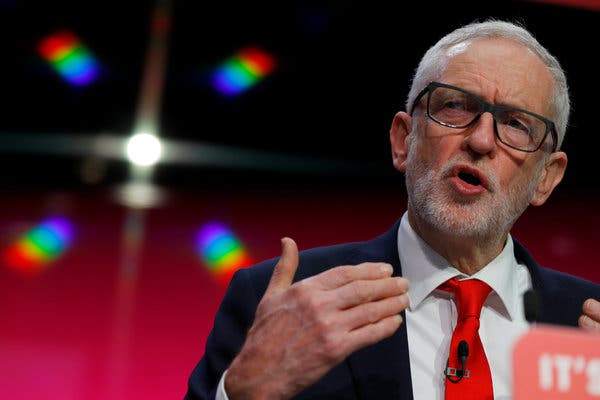 The leader of Britain's Labour Party, Jeremy Corbyn, has been influenced by the work of Dr. Mazzucato.Credit...Phil Noble/Reuters

During a break at the United Nations gathering, Dr. Mazzucato escaped the air conditioning to confer with two colleagues in Italian on a patio. Tall, with a muscular physique, she wore a brightly colored glass necklace that has become something of a trademark on the economics circuit. Having traveled to five countries in eight days, she was fighting off a cough.

"In theory, I'm the 'Mission Muse,'" she joked, lapsing into English. Her signature reference is to the original mission to the moon — a state-spurred technological revolution consisting of hundreds of individual feeder projects, many of them collaborations between the public and private sectors. Some were successes, some failures, but the sum of them contributed to economic growth and explosive innovation.

Dr. Mazzucato's platform is more complex — and for some, controversial — than simply encouraging government investment, however. She has written that governments and state-backed investment entities should "socialize both the risks and rewards." She has suggested the state obtain a return on public investments through royalties or equity stakes, or by including conditions on reinvestment — for example, a mandate to limit share buybacks.

Emphasizing to policymakers not only the importance of investment, but also the direction of that investment — "What are we investing in?" she often asks — Dr. Mazzucato has influenced the way American politicians speak about the state's potential as an economic engine. In her vision, governments would do what so many traditional economists have long told them to avoid: create and shape new markets, embrace uncertainty and take big risks.

Inside the conference, the news was uniformly bleak. Pavel Kabat, the chief scientist of the World Meteorological Organization, lamented the breaking of global temperature records and said that countries would have to triple their current Paris-accord commitments by 2030 to have any hope of staying below a critical warming threshold. A panel on land use and food waste noted that nine species account for two-thirds of the world's crop production, a dangerous lack of agricultural diversity. All the experts appeared dismayed by what Jeffrey Sachs, the S.D.S.N.'s director, described as the "crude nationalism" and "aggressive anti-globalization" ascendant around the world.

"We absolutely need to change both the narrative, but also the theory and the practice on the ground," Dr. Mazzucato told the crowd when she spoke on the final expert panel of the day. "What does it mean, actually, to create markets where you create the demand, and really start directing the investment and the innovation in ways that can help us achieve these goals?"

Earlier in the day, she pointed at an announcement on her laptop. She had been nominated for the first Not the Nobel Prize, a commendation intended to promote "fresh economic thinking." "Governments have woken up to the fact the mainstream way of thinking isn't helping them," she said, explaining her appeal to politicians and policymakers. A few days later, she won.

-- via my feedly newsfeed
Posted by The Red Caboose at 6:48 AM