Article Illustrates the kind of challenges we confront IF Dems WIN, or worse, if the fascists are not marginalized.
Merkel's Climate Deal Will Cost Billions And Everyone Hates It
https://www.bloomberg.com/news/articles/2019-09-21/merkel-s-climate-deal-will-cost-billions-but-everyone-hates-it

When it comes to Germany's $60 billion climate plan, environmentalists and polluters are in rare agreement. It's a dud.

Europe's economic engine wanted to regain its place on the frontlines in the battle over global warming. But instead, Chancellor Angela Merkel emerged from tortuous all-night negotiations with a package that failed to live up to the hype. Far from reclaiming her place as a climate champion, it exposed further the weakness of her leadership now in its twilight years.

Activists branded the measures, such as extra taxes on flights and incentives for electric cars, as insufficient for a "climate emergency." Economists criticized carbon price proposals as too shy an approach to spur emissions cuts. Big industry and some union leaders slammed Germany's go-it-alone approach, saying it would harm jobs and businesses.

In short, no one was happy. On Friday, thousands took to the streets in Berlin and around the world to demand action from the political class on what is rapidly becoming a key issue for voters. Among them were kids, inspired by Greta Thunberg, the Swedish teenager who within a year has become the face of the climate movement. 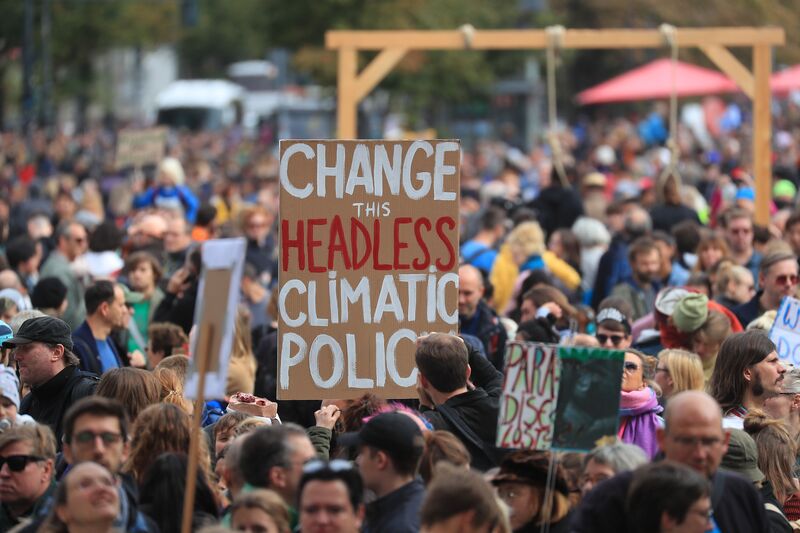 The far-right party, a persistent thorn in Merkel's side, doubts the scientific evidence behind climate change and says Merkel's plan is "really expensive."

Polls, however, show an increasing share of Germans place greater weight on the environment than they do on jobs. Record-breaking heat waves, dwindling of the Rhine river and a series of powerful storms have turbocharged the climate debate and lifted the Green party to second place in election polls.

But environmentalists think Merkel's plan is nothing but "hot air and empty promises." Germany will miss its 2020 climate goals due to rising emissions from transport and heating, and the new plan intended to at least chart a path to a 55% cut in emissions by 2030 compared with 1990 levels.

"I am bitterly disappointed," Annalena Baerbock, co-leader of the Green party, said of the measures. "The government has failed in the humanitarian task of climate protection."

After threatening to pull out of Merkel's coalition, the Social Democratic Party appeared to back down. In a comment on Saturday, SPD's parliamentary caucus head Matthias Miersch said the agreement lays the groundwork for fighting climate change.

Germany is not alone in struggling to reconcile climate needs with messy politics at a time when recession clouds gather. The task of trying to appease industrial interests, while grappling with a worsening economic situation and restive environmentalists is near impossible.

In Canada, October's election could be decided on Justin Trudeau's introduction of a carbon tax. In France, Yellow Vest activists have taken to the streets to protest Emmanuel Macron's environmental levies on gasoline. In the U.S., Donald Trump is taking the climate fight to California with a plan to revoke its right to regulate vehicle emissions. 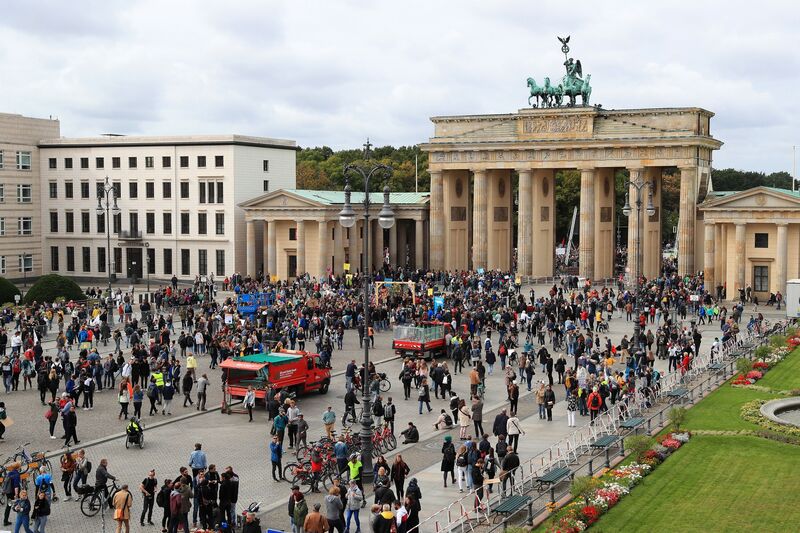 Protesters arrive in Pariser Platz square near the Brandenburg Gate during the Global Climate Strike.

There are a lot of stakeholders in the game and the lesson Merkel is learning is that in trying to please everyone, you please no one.

While upsetting environmentalists, Merkel still didn't soothe the concerns of fossil-fuel industry leaders. For example, would an increase in taxes on flights put German airlines at a disadvantage against international competitors who don't face the same charges?

"This intensification of a unilateral approach in the highly competitive aviation market will not reduce CO2 emissions, but merely shift them, which is ecologically useless and economically harmful to airlines in Germany," said BDL chief executive Matthias von Randow, who runs the powerful airline lobby.

The union representing energy and chemical industry workers said the government avoided tackling the slow expansion of Germany's power grid with new cables needed to get renewable energy from north sea wind parks to the country's manufacturing heartlands further south. Attempts to build power lines have so far gotten snagged by "not in my backyard" protests from locals.

The measures "are exactly the flip-flopping that the chancellor said she wanted to avoid," IGBCE leader Michael Vassiliadis said in a statement.

Merkel may have also misjudged the public mood, with a mid-week ARD poll suggesting voters now place a higher priority on the environment than on economic wellbeing. As she heads to the United Nations climate conference next week, one has to wonder whether she could have done more.

-- via my feedly newsfeed
Posted by The Red Caboose at 5:27 AM